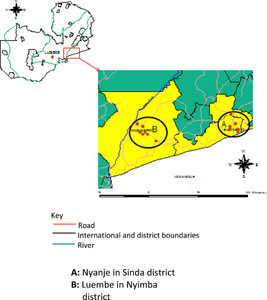 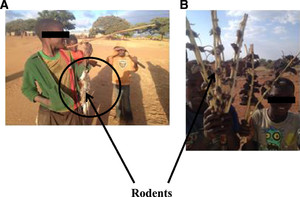 Plague is a fatal, primarily rodent-flea-borne zoonotic disease caused by Yersinia pestis. The identification of risk factors of plague was investigated through questionnaire interview and conducting focus group discussion (FGD) in Sinda and Nyimba districts of eastern Zambia. A total of 104 questionnaires were administered to individual respondents and 20 groups consisting of 181 discussants, which comprised FGD team in this study. The study revealed that trapping, transportation, and preparation of rodents for food exposed the community to rodent and their fleas suggesting that plague may have occurred primarily by either flea bites or contact with infected wild rodents. The study also revealed that most people in communities consumed rodents as part of their regular diet; therefore, contact with small wild mammals was a common practice. The mode of transportation of freshly trapped rodents, in particular, carcasses risked human to flea bites. Questionnaire respondents (75%) and FGD discussants (55%) indicated that trappers preferred to carry rodent carcasses in small bags, whereas 55.8% and 20% respectively, reported hunters carrying carcasses in their pockets. Carrying of carcass skewers on trappers’ shoulders was reported by 38.4% and 20% of individual respondents and FGD, respectively. All these activities were exposing humans to rodents and their fleas, the natural reservoirs and vectors of plague, respectively. This study also showed that there is a statistically significant (χ2 = 4.6878, P < 0.05), between digging of rodents from their burrows and the presence of fleas on the hunter’s bodies or clothes, which exposes humans to potentially flea bites in an enzootic cycle.