Incidence of human cases of tularemia in Armenia by marz from 1996 to 2012. This figure appears in color at www.ajtmh.org.

Distribution of human cases of tularemia by month in Armenia from 1996 to 2012. This figure appears in color at www.ajtmh.org.

Hotspot analysis of human tularemia cases excluding outbreak cases from 1996 to 2012 in Armenia using Getis-Ord-Gi* method. This figure appears in color at www.ajtmh.org.

Suitability map for areas in Armenia with increased risk of human tularemia. This figure appears in color at www.ajtmh.org. 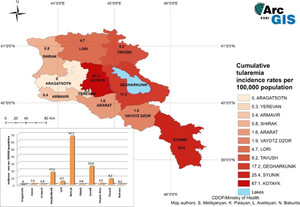 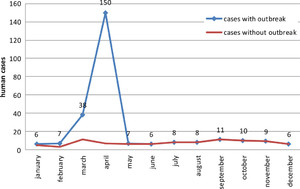 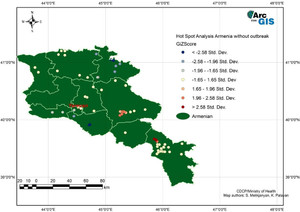 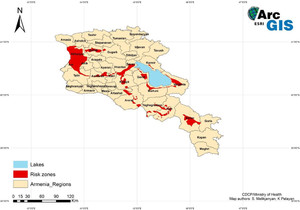 A retrospective analysis was conducted of human cases and outbreaks of tularemia in the Republic of Armenia from 1996 to 2012 utilizing geographic information system software. A total of 266 human cases of tularemia were recorded in Armenia from 1996 to 2012, with yearly incidence ranging from 0 to 5.5 cases per 100,000 people. Cases predominantly affected the male population (62.8%), 11–20 year age group (37.2%), agricultural workers (49.6%), and persons residing in rural areas (93.6%). In 2003, a waterborne outbreak involving 158 cases occurred in Kotayk Marz, and in 2007, a foodborne outbreak with 17 cases occurred in Gegharkunik Marz, attributed to exposure of food products to contaminated hay. Geospatial analysis of all cases showed that the majority were associated with the steppe vegetation zone, elevations between 1,400 and 2,300 m, and the climate zone associated with dry, warm summers, and cold winters. Characterization of these environmental factors were used to develop a predictive risk model to improve surveillance and outbreak response for tularemia in Armenia.