Sample clustering using a neighbor-joining tree constructed with the neutral microsatellites of samples from Hispaniola using the Nei et al.’s (1983) DA distance. A1 (in red) represents the haplotype of the seven Plasmodium falciparum domestic cases reported in 2015. The clusters defined by structure are represented by the different colors. 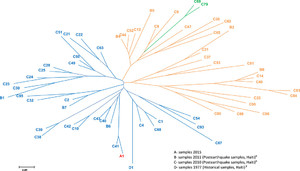 The Caribbean island of Hispaniola is targeted for malaria elimination. Currently, this is the only island with ongoing transmission of malaria in the Caribbean. In 2015, six patients from Puerto Rico and one from Massachusetts, who traveled to Punta Cana, Dominican Republic, were confirmed to be infected with Plasmodium falciparum. Additional molecular analysis was performed at the Centers for Disease Control and Prevention to characterize the drug-resistant alleles and Plasmodium population genetic markers. All specimens carried wildtype genotypes for chloroquine, sulfadoxine-pyrimethamine, and artemisinin resistance genetic markers. A mutation in codon 184 (Y/F) of Pfmdr-1 gene was observed in all samples and they shared an identical genetic lineage as determined by microsatellite analysis. This genetic profile was similar to one previously reported from Hispaniola suggesting that a clonal P. falciparum residual parasite population present in Punta Cana is the source population for these imported malaria cases.