Participant flow in the Partnership for the Rapid Elimination of Trachoma cluster-randomized trial in Niger. 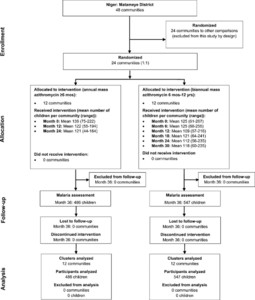 Mass Azithromycin and Malaria Parasitemia in Niger: Results from a Community-Randomized Trial

Azithromycin has been proposed as a potential alternative or adjunctive option for use in the prevention and treatment of uncomplicated malaria.1–6 Though azithromycin does have antimalarial properties, evidence suggests that its activity against malaria is weak and inferior to first-line agents as monotherapy, and support for its use in combination with other antimalarial drugs remains equivocal.7,8 Azithromycin is well tolerated, however, and is considered to have minimal risk associated with use in young children and pregnant women.8–10

A previously published substudy of a large, cluster-randomized trial for trachoma conducted in Niger found that malaria parasitemia among children was significantly lower in communities that received two mass distributions of azithromycin compared with communities that received one distribution.11,15 This study suggested that an additional mass distribution during the low-transmission season contributed to the lower prevalence found after 1 year of treatment.11 Herein, we assess malaria parasitemia among children in Niger after 3 years of treatment in a different set of communities randomized to annual or biannual mass distributions of oral azithromycin. This time frame enabled us to examine longer term effects of multiple distributions of azithromycin on malaria when given during both the low- and high-transmission seasons.

The Partnership for the Rapid Elimination of Trachoma was a group of cluster-randomized trials conducted in The Gambia, Niger, and Tanzania (clinicaltrials.gov, NCT00792922).15 Eligibility criteria for study communities have been described in depth previously.16 Niger communities were eligible for inclusion if the total population was between 250 and 600 people at the time of the last government census and the prevalence of active trachoma among children under 72 months of age was ≥ 10%. In Niger, participants from 48 grappes (smallest government health unit, termed “community” in this report) in six Centers de Santé Intégrées (CSIs) in the Matameye District of the Zinder region were included in the trial.

Among the 24 enhanced coverage communities discussed herein, 12 were randomized to receive annual mass distribution of oral azithromycin in all persons ≥ 6 months of age, and 12 were randomized to receive biannual mass distribution of oral azithromycin in children 6 months to 12 years of age during the 3-year study period. Annual distributions were provided during the high-transmission season for malaria in Niger, and the additional biannual distributions were provided during the low-transmission season. In both arms, treatment entailed directly observed doses of oral azithromycin (20 mg/kg up to a maximum dose of 1 g in adults).17,18 Children under 6 months of age and those allergic to macrolides were given topical tetracycline ointment (1%) to be applied to both eyes twice a day for 6 weeks. In the annual treatment arm, pregnant women were also offered topical tetracycline. Treatment coverage was determined based on the census directly preceding treatment.

Community residents were advised to alert village health workers within 2 weeks after mass treatment if they and/or their children experienced an adverse event, defined as diarrhea, nausea, and vomiting for more than 2 days, hospitalization for any cause, or death. Residents were referred to the nearest health-care center as needed.

Blood samples were collected from children in both the annual and biannual treatment arms at 36 months after study initiation. The study aimed to collect thick blood smears and hemoglobin concentration from 50 children in each study community. Sixty-two children 6–60 months of age from each community were randomly selected from the most recent census prior to field data collection. If a community had fewer than 50 children, blood specimens were taken from all children. After obtaining verbal consent from a parent or guardian for each study participant, thick blood smears and hemoglobin concentration were collected at a centralized exam station in each community according to methods previously described.11

Thick blood smears were collected on glass slides, air-dried, and stored at room temperature. Two experienced microscopists at the Zinder Regional Hospital in Niger stained the thick blood smears with 3% Giemsa and used a light microscope to determine the presence or absence of Plasmodium parasites on the slides. The microscopists were masked to treatment arm. If both microscopists observed parasites, then the smear was considered positive. Discordant slides were considered negative. To assess parasite density, the microscopists counted the number of asexual parasites per 200 white blood cells (assuming white blood cell count = 8,000/μL).19 The average of the two parasite density readings was used in analyses. Gametocytes were considered present if observed by either microscopist, given the low prevalence. Hemoglobin concentration was determined for all randomly selected children (HemoCue AB, Ängelholm, Sweden).

We estimated that 24 communities (12 communities per arm) would provide greater than 80% power to detect a 3% absolute difference in malaria parasitemia. The sample size calculation assumed a baseline prevalence of 10% and an intraclass correlation coefficient (ICC) of 0.075.20

The primary analysis accounted for clustering at the level of the randomization unit (community) by comparing the community prevalence of malaria parasitemia in the annual and biannual treatments at 36 months after study initiation arms using a paired t test. To ensure results were not dependent on assumptions, sensitivity analyses were conducted with nonparametric tests (Wilcoxon signed rank) at the community level. A mixed-effects logistic regression model was used to examine effects at the individual level while clustering for community. Secondary outcomes, parasite density, gametocytemia, and hemoglobin concentration, were assessed similarly. All analyses were performed as intent-to-treat using Stata 13 (Statacorp LP, College Station, TX).

Ethical approval was obtained from the University of California, San Francisco Committee for Human Research and the Comité d’Ethique du Niger (the Ethical Committee of Niger). This study is registered at clinicaltrials.gov (NCT00792922) and was implemented in accordance with the Declaration of Helsinki. Given the high rates of illiteracy in the study area, the institutional review boards approved verbal informed consent, both from the local chiefs of each community before randomization and each child participant’s parent or guardian before data collection.

Grades for the presence or absence of malaria parasites were concordant between the two microscopists in 99.4% of samples with an ICC of 0.994 (95% confidence interval [CI] = 0.993–0.995). Comparing the two assessments of parasite density resulted in an ICC of 0.957 (95% CI = 0.951–0.962). Table 3 shows the results for all assessments. At the single time point after 3 years of mass azithromycin distribution, the community-level prevalence of parasitemia was similar in the biannually treated communities and the annually treated communities (mean difference = 0.00, 95% CI = −0.15 to 0.15, P = 0.995). A mixed-effects logistic regression model with treatment arm as a fixed effect and community as a random effect showed similar results (odds ratio = 1.00, 95% CI = 0.58–1.73, P = 0.997). No significant differences were seen in community-level parasite density, gametocytemia, or hemoglobin concentration when comparing annually treated communities to biannually treated communities. Analyses conducted with Wilcoxon signed rank tests and mixed-effects regression models for each of these three assessments showed similar results.

In this cluster-randomized trial, we were unable to demonstrate a difference in malaria parasitemia, parasite density, or hemoglobin concentration between children who received annual or biannual treatment with azithromycin after 3 years of the intervention. A previous study in Niger found a significant reduction in malaria parasitemia and parasite density in communities with an additional treatment during the low-transmission season compared with communities with a single mass treatment after 1 year.11 In this study, we assessed the effect of mass distributions of azithromycin on malaria in a different set of communities over a longer time period during the high-transmission season.

Another explanation for the difference in study results could be that the previous study assessed malaria outcomes in the low-transmission season and the present study assessed outcomes in the high-transmission season. Single mass treatments with azithromycin have shown reductions in malaria prevalence immediately after treatment, but these reductions are not maintained over time without additional treatment.14 An effect of azithromycin might be expected during the low-transmission season when reinfection is uncommon, but the lack of an effect during the high-transmission season may be due to the high malaria risk that remains even after azithromycin’s protective effects decline. Alternatively, the significant reduction in malaria parasitemia seen in the biannual treatment arm after 1 year may have been due to chance.

This study has several important limitations. First, no baseline assessment of the prevalence of malarial parasitemia was conducted, which may have revealed whether parasitemia decreased in both arms. Baseline prevalence could have offered a more powerful study design, though randomized posttest analysis does permit valid inference,22 since treatment assignments are stochastically independent of other explanatory covariates.23 In addition, the treatment schedule and dosage for the study was designed for trachoma control, not malaria prevention. Seasonal malaria chemoprevention has demonstrated efficacy when administered during the high-transmission season in areas like Niger with seasonal malaria.24,25 However, a mathematical model of malaria transmission dynamics in Niger demonstrated that mass azithromycin distributions during the high-transmission season may not necessarily be the most effective in reducing malaria transmission.26 Our previous study also provides some evidence that an intervention with azithromycin during the low-transmission season may be beneficial.11 It may be the case that single mass treatments during the low-transmission season provide protection, but repeated treatments would be required to reduce malaria risk during the high-transmission season. This study also did not include confirmatory antibiotic resistance testing, so it was not possible to examine the potential relationship between antibiotic resistance after 3 years of mass treatment and malaria parasitemia. Finally, this study only compared the effects of mass azithromycin on children receiving either annual or biannual treatment. A comparison of the effects of multiple rounds of mass azithromycin to no treatment could provide a more complete examination of the impact of mass azithromycin.