The tertiary structure and different role of public hospitals. The central function of surgery network is to ensure the right tertiary structure and different role of public hospitals. As a result, patients can get qualified surgery nearby. The surgery register database was set up among 28 designated and was led by the central teaching hospital, the First Teaching Hospital of Xinjiang Medical University. The database and teleconsulting helped to standardize diagnosis and treatment. The community–regional–central hospital stepwise consultation optimized the surgery register procedure, keeping the patients to be treated in the local hospital, decreased the disordered transfer, and ensured complicated cases to be efficiently transferred and treated in central hospital. This figure appears in color at www.ajtmh.org.

The clinical characters of 2,544 echinococcosis patients with surgeries in Xinjiang during 2008–2013. From year 2008 to 2013, a total of 2,544 patients (52.75% male and 47.25% female), were hospitalized for human echinococcosis-related surgeries. The overwhelming major type is cystic human echinococcosis. The young and middle-aged are mostly affected (666 patients in 30s and 544 in 40s); in ethnic group division is coherent to the local population composition (Han: 888, Kazakh: 681, Uighur: 529, account the majority of patients). The hospital stay varied in different hospitals and affected the direct medical cost. This figure appears in color at www.ajtmh.org.

Direct medical cost for individual patient analysis. The total 2,544 patients who had the human echinococcosis surgeries in 28 echinococcosis designated hospitals in Xinjiang from 2008 to 2013 were included to calculate their average direct cost for surgery. As shown in this figure, the mean direct medical cost of an echinococcosis surgery showed RMB18890 yuan ($2,998). The mean reimbursement of government subside is RMB7249 ($1,150), mean medical insurance coverage is RMB5938 ($942), mean self-payment is RMB11185 ($1,775). This figure appears in color at www.ajtmh.org. 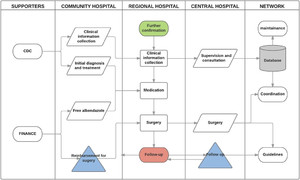 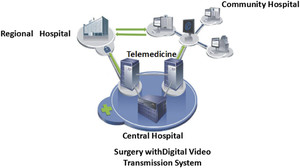 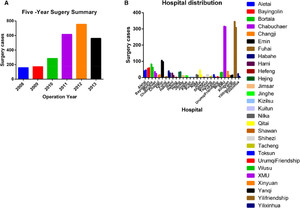 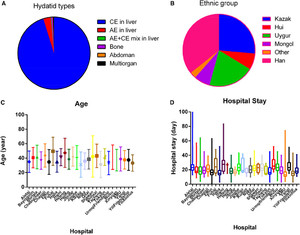 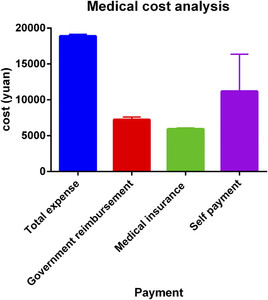 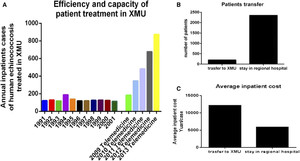 Control of Human Echinococcosis in Xinjiang, China, with 2,544 Surgeries in a Multihospital Network