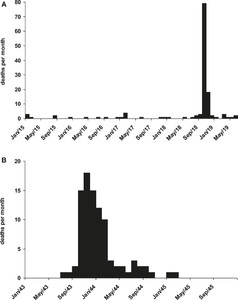 Malaria has been a military problem throughout history capable of causing epidemics that stop military operations. Individual mortality was examined from records of the three major wars of the 20th century that involved Australia in which 133 (1914–1919), 92 (1943–1945), and two (1965–1967) soldiers are known to have died with malaria. Those dying were predominately enlisted soldiers with a mean age of 29 years often complicated by other infections such as influenza, pneumonia or scrub typhus. Lethal epidemics of falciparum malaria occurred in Palestine/Syria in October 1918 and New Guinea in September 1943 to March 1944. Although no Australian soldier has died in nearly 50 years from malaria, there were three serious falciparum infections in soldiers in East Timor 1999–2000 who might have died if intensive care had not been provided. Recent military deployments into Africa including United Nations contingents still show falciparum malaria’s lethality despite the availability of effective malaria chemoprophylaxis.

Infectious diseases have historically been part of the wastage of war and a risk that all soldiers assume when fighting in the tropics. Disease primarily due to falciparum malaria stopped the Australian Army three times during the 20th century in Palestine in 1918, in New Guinea in 1943–1944, and in Vietnam in 1968.1,2 During the first two epidemics there were many deaths unlike the 1968 epidemic when no soldiers died.3 Even with the availability of good intravenous antimalarial drugs such as quinine in the 20th century and now artemisinin compounds, some soldiers still present with overwhelming parasitemia and die within the first hospital day. In areas of intense transmission such as tropical Africa, falciparum malaria infects those receiving imperfect chemoprophylaxis and using inadequate mosquito avoidance measures. During current United Nations peacekeeping missions in Africa, falciparum malaria is the leading cause of medical deaths as well as medical evacuations despite malaria being a well-known risk with effective chemoprophylaxis and treatment options. Military public health records in Australia list all soldiers likely to have died primarily from malaria during the 20th century which when linked to publicly available electronic databases allow the detailed description of those deaths. These clear failures of the military medical system to prevent and treat a curable disease are examined with the intention of learning what may be done during future operations to insure such tragic events do not reoccur.

The First World War mortality records were extracted from the historical Roll of Honor available on-line from the Australian War Memorial (awm.org) in Canberra as part of a previous project examining influenza mortality.4 The Second World War mortality records were collected by Brigadier Hamilton Fairley as part of the work done at Land Headquarters Medical Research Unit and preserved in his unpublished papers at the Basser Library.2,5 The two deaths during the Vietnam War were identified from the Roll of Honor and the official medical history of that campaign.3,6 The National Archives of Australia (naa.org) makes most military records of the soldiers of the two World Wars publicly available on-line with variable amounts of extant medical information. Deaths of prisoners of war in southeast Asia are a special case with limited information and are described in the discussion section. These records were collected into a single database and analyzed in regard to age, rank, geographic place of death, date of death, presence of other infections, and proportion of soldiers in front-line fighting units (cavalry in the First World War, infantry in the Second World War). No other information was generally available on most malaria-associated deaths. No ethical consent process was required from this historical mortality project using publicly available information.

The table shows the characteristics of the malaria-associated deaths occurring in the last 100 years in the Australian military forces with 133 (1914–1919), 92 (1943–1945), and two (1965–1967) deaths recorded during the First World War, Second World War, and Vietnam War, respectively. Roughly comparable U.S. Army figures are 36, 302, and 78 as in the last column of the Table 1.7–10 Most of the men who died were junior in rank and members of fighting units such as the Light Horse Regiments (cavalry equivalent) in the Middle East during the First World War and infantry battalions on the island of New Guinea during the Second World War. Malaria-associated deaths were regionally concentrated with 89% of First World War deaths occurring in the Middle East and essentially all malaria-associated deaths during the Second World War reported as having been infected in New Guinea. Two distinct malaria epidemic periods occurred as seen in the Figure 1 with peaks in October 1918 when a major cavalry offensive was moving north from Palestine into Syria and in September 1943 to March 1944 during infantry operations on the north coast of New Guinea.6,11,12 The October 1918 malaria epidemic has been previously described in some detail and its unusual lethality is likely due to synergy with the simultaneous influenza pandemic.13

Characteristics of malaria deaths in the Australia Defense Force during the First World War, the Second World War, and the Vietnam War.

Soldiers dying of malaria averaged nearly 30 years of age which is distinctly older than most fighting soldiers during the World Wars. Several of the men died with malaria parasitemia as a secondary finding with at least two men who were stated to have died of combat wounds. Appendicitis and intra-abdominal surgical emergencies (4) were described; dysentery (5), polyneuritis (2), renal carcinoma (1), gas gangrene (1), and bacterial endocarditis (1) were also stated to have occurred in those who died with malaria. At least two soldiers died of staphylococcal sepsis occurring after they had been admitted to hospital for falciparum malaria. Malaria was often combined with pneumonia or bronchopneumonia (23) in Palestine in 1918 and (12) in New Guinea in 1943–1944. Scrub typhus (35) was mentioned many times along with malaria in New Guinea 1943–1944, but how scrub typhus would have been diagnosed in febrile malaria patients was not stated. Other aspects of the malaria-associated deaths noted included 16 cases of cerebral malaria, four blackwater fever patients, and one who died of a ruptured spleen. Eighteen vivax (benign tertian) malaria cases were noted but the large majority of deaths were either stated to be falciparum (malignant tertian) malaria or unclassified.

These data need to be seen within their military context as deaths both from and with malaria. How much the various additional infections such as scrub typhus or injuries such as war wounds contributed to the lethal oncome cannot be stated with any certainty at this distance in time with the limited records available. As with all public health reporting, these data have some limitations due to an unknown proportion of incomplete reporting but they are likely adequate for the descriptive epidemiology presented.

One large known gap are the malaria deaths which occurred during the initial Japanese invasion of New Guinea and the Second World War Prisoner of War (POW) camps in southeast Asia which are not included in these figures. Fifty of 250 Australian soldiers fleeing after the fall of Rabaul during invasion of New Britain are said to have died of malaria when limited quinine stocks were exhausted.1,2 In the POW camps the extremity of starvation, over-work and multiple tropical infections with lack of extant records means that only bare estimates can be made as to how many of the approximately 8,000 Australian POW deaths during the Second World War were due to malaria.14 Nearly, all Australian POWs in southeast Asia outside of Singapore were infected with malaria which had some unmeasured contribution to the huge death toll. “F Force” is a particularly tragic story of 6,998 British and Australian prisoners on the Thai–Burma railroad, of whom 3,087 (44%) died within a single year.15 Despite immense difficulties, a POW malaria team conducted control measures and laboratory examinations along the railway construction area. The leading causes of POW deaths in “F Force” were listed in order as malnutrition, beriberi, dysentery, cholera, malaria, and tropical ulcers. It was estimated that only 4% of POW deaths were directly due to malaria and in another 7% it was a contributing cause. All POWs on the Thai–Burma railroad were suffering from a combination of simultaneous tropical infections and malaria was part of this vicious cycle that all too frequently lead to death.15

The Australian military malaria experience in Vietnam (∼2/1,000 case fatality rate) is roughly comparable to the U.S. military which had > 80,000 cases and 137 deaths (1.7/1,000 case fatality) from 1965 to 1971.7–10 During the same era (1963–1972), 42 malaria deaths occurred inside the United States of which the military cases had a 6/1,000 case fatality rate compared with civilian cases with 73/1,000 case fatality rate.9 The higher rates likely reflect delayed diagnosis of an exotic infection by physicians unfamiliar with malaria. An Australian civilian series over the decade of the 1990s noted 7,381 malaria cases with seven resulting deaths.16 Particular risk populations include immigrants visiting friends and family back in their home country often with the mistaken belief that they retain some degree of immunity to malaria that negates the need to use chemoprophylaxis. This observation has also been made in U.S. military members originally born in west African countries whose risk of malaria infection is 44 times than of U.S. born soldiers.17

Although no Australia soldier has died in nearly 50 years from malaria, there were three serious falciparum infections in soldiers deployed to East Timor 1999–2000 who might have died without intensive care.18 An epidemic of falciparum malaria in U.S. Marines in Liberia in 2003 resulted in 44 Marines being air-evacuated from their ships, five of whom were critically ill (two cerebral malaria, three acute respiratory distress syndrome) until antimalarial drugs and intensive care cured them.19

There are scattered reports of malaria deaths and multiple medical evacuations in United Nations’ peacekeepers from multiple national contingents operating in Cambodia, Sierra Leone, Angola, southern Sudan, and Democratic Republic of Congo.20,21 Some of the troop contributing countries providing military field hospitals in United Nations service are unfamiliar with tropical diseases particularly malaria and do not adequately respect its ability to kill soldiers quickly. Although malaria deaths have been considerably diminished in African children by recent public health programs using insecticide treated bed nets, malaria exposure of soldiers in many conflict zones of southern Africa remains high. Currently used malaria chemoprophylaxis regimens have been shown efficacious in many situations when taken as directed, so what is the gap between what is possible and what is actually achieved that leaves soldiers at lethal risk? Adherence is the key issue as medications must be taken to stop malaria, yet what is involved is more than failure of routine military discipline. Good defences fail when soldiers lack confidence and the perceived hazard of malaria chemoprophylaxis itself rather than malaria infection has played a large role. Large studies have strongly indicated the safety of malaria chemoprophylaxis but serious neuropsychiatric adverse events exist and have taken on a greatly magnified role from extensive coverage on the internet.22 Achieving excellent malaria prophylaxis operations during the recent Ebola epidemic in west Africa was both the result of convincing the soldiers of the reality of the risk as well as finding a medication they were willing to use.23 Although continuing to seek better forms of malaria treatment and prophylaxis, such practical solutions provide the way to protect soldiers currently in high endemicity areas. Regardless, malaria remains a lethal threat that needs to be acutely recognized by any military force if they are to avoid adding to the casualty list from this preventable and treatable infection.