Prevalence of patients with parasites (left) and fever (right) following treatment from 2006 to 2014. 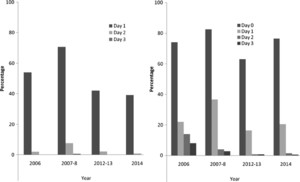 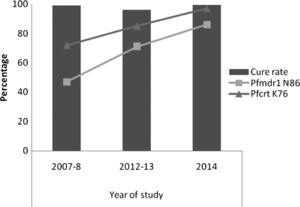 Sustained High Cure Rate of Artemether–Lumefantrine against Uncomplicated Plasmodium falciparum Malaria after 8 Years of Its Wide-Scale Use in Bagamoyo District, Tanzania

Artemisinin–based combination therapy (ACT) is the recommended first-line treatment of uncomplicated Plasmodium falciparum malaria globally.1 Tanzania adopted artemether–lumefantrine (AL) as first-line treatment of uncomplicated malaria in November 2006.2 The drug has shown to have high cure rate both in Tanzania and other parts of Africa with most of the countries indicating a failure rate of < 5%.3 Follow-up studies conducted in Bagamoyo district, and other parts of Tanzania between 2007 and 2013 have also reported an AL failure rate of ≤ 4%.4–6 However, following frequent exposure to ACT, P. falciparum parasite biology and probably its susceptibility to the drug have been changing.7,8

Plasmodium falciparum resistance against ACTs has emerged in parts of southeast Asia (SEA),9,10 and it has been associated with Pfkelch13 mutations.11,12 In Africa, no ACT resistance has been reported; however, there are reports of reduced in vitro sensitivity of P. falciparum parasites against lumefantrine, the long-acting partner drug of AL.13–15 The SEA ACT-resistance-associated polymorphisms have, however, not been reported in Africa.16,17 Conversely, selection of single nucleotide polymorphisms in P. falciparum multidrug-resistant gene 1 (Pfmdr1) N86 and chloroquine resistance transporter gene (Pfcrt) K76 has been reported after treatment with AL both in vivo and in vitro, and is thought to be associated with the reduced parasite sensitivity against lumefantrine.13–15,18–20 A temporal trend analysis of data collected in Bagamoyo district between 2004 and 2011 revealed an increase in the proportion of Pfmdr1 N86 and Pfcrt K76 in the parasite population following the adoption of AL policy, and a corresponding decrease in the proportion of Pfmdr1 86Y and Pfcrt 76T, which were associated with chloroquine resistance.7 However, it is not well understood whether the increase in Pfmdr1 N86 and Pfcrt K76 prevalence has affected the AL cure rate in this area. Temporal trend analysis might help to monitor the AL cure rate in relation to Pfmdr1 N86Y and Pfcrt K76T changes over time in the study area.

Therefore, the aim of this study was to assess the temporal trend of the AL cure rate and its association with baseline Pfmdr1 N86Y and Pfcrt K76T before and after 8 years of wide-scale use of the ACT as first-line treatment of uncomplicated P. falciparum malaria in Bagamoyo district, Tanzania.

Bagamoyo district is a high endemic area with malaria transmission occurring throughout the year with peaks related to the long rain season from May to July and short rain season from November to December. Plasmodium falciparum and Anopheles gambiae sensu stricto are the major malaria parasite species and vector, respectively.21,22 AL is used as the first-line treatment of uncomplicated malaria in Tanzania since November 2006. Long-lasting insecticide-treated mosquito nets is the major vector control method.23

The first trial was an AL pharmacokinetics and pharmacodynamics study conducted in 2006,24 the second trial was a supervised treatment arm of the two arms AL efficacy and effectiveness clinical trial carried out in 2007–2008,4 the third trial was an AL efficacy trial conducted in 2012–2013 (unpublished data), and the fourth trial was a two arms AL and AL plus a single low-dose primaquine (PQ) efficacy and safety clinical trial carried out in 2014.25 The PQ arm was included since there was no statistically significant difference in the cure rate between AL and AL + PQ arm.26 The first study was conducted 6 months before implementation of AL treatment policy, whereas the second, third, and fourth studies were conducted 1, 6, and 8 years after the implementation of AL in Bagamoyo district, respectively. The subjects inclusion and exclusion criteria are described elsewhere.4,24,25

Enrolled patients were treated with a standard 3 days course of AL (Coartem®, Novartis Pharma, Basel, Switzerland) according to Tanzanian national treatment guidelines for uncomplicated P. falciparum malaria with the second dose administered exactly 8 hours after the first dose and the remaining doses administered in the morning and evening,2 but a slight modification was done for the 2006 cohort and a subset of 45 patients from the 2012–2013 cohort, whereby doses were given at 0, 8, 24, 36, 48, and 60 hours. For the 2014 cohort, a 0.25 mg/kg single-dose PQ was administered together with the first AL dose among patients in the AL + PQ arm.25 All doses were directly observed. Patients were observed for 30 minutes after each drug dose and treatment was readministered in case of vomiting within this period.

Genomic DNA was extracted from dried blood spots collected at baseline and the time of recurrent infection using ABI PRISM® 6100 Nucleic Acid PrepStation (Applied Biosystems, Fresno, CA) for 2006 and 2007–2008 samples,4,24 whereas a 10% chelex method was used for the 2012–2013 and 2014 samples.30 The extracted DNA from patients classified as LCF or LPF was genotyped to differentiate recrudescence from reinfection by stepwise genotyping of P. falciparum block 3 of merozoite surface protein (msp) 2, block 2 of msp 1, and region II (RII) of glutamate-rich protein,31 using a nested PCR method described previously.30 Briefly, the respective initial amplifications were followed by individual nested PCR reactions using family-specific primers for msp 1 (K1, MAD20, and RO33) and msp 2 (FC27 and IC) and seminested for RII of glurp.31 The amplicons were loaded on agarose gel containing GelRed™ (Biotium, Inc. Hayward, CA), separated by electrophoresis, and then visualized under ultra violet-transillumination (Gel Doc™ (Bio-Rad, Hercules, CA), and sized using Image Laboratory™ software (Bio-Rad). Alleles in each family were considered the same if fragments size were within 20 base pair interval. Patients with recurrent parasitemia, but with negative PCR results were considered to have unresolved PCR-adjusted outcome and were excluded in the final analysis. The cure rate was estimated based on the proportion of patients experiencing therapeutic failure during the 28 days follow-up period; however, the 2006 cohort was excluded from this analysis. Recrudescence was defined as presence of at least one matching allelic band, and reinfection was defined as absence of any matching allelic band at baseline and on the day of parasite recurrence.31

The studies were approved by the Muhimbili University of Health and Allied Sciences, Tanzania, Food and Drug Authority and the National Institute for Medical Research ethics committees. The molecular work in Sweden was approved by the Regional Ethics Committee, Stockholm. Written informed consent was obtained from all patients and a proxy consent from parents/guardians in patients aged < 18 years, prior to enrolment.

Data were double entered in an electronic database and analyzed using SPSS software, version 16 (SPSS Inc., Chicago, IL) and R, version 3.2.3 (R Foundation, Vienna, Austria). Data were analyzed as per protocol. Cure rate end points were analyzed by survival analysis. Changes in cure rate, Pfmdr1 N86 and Pfcrt K76 proportions from 2006 to 2014 were compared using χ2square tests for trend. Independent χ2-test or Fisher's exact and F test were used to compare the categorical and continuous variables at baseline, respectively. Median slope half-lives were compared between groups using Mann–Whitney test. Analysis of variance was used to compare mean differences between groups. Data were censored at the time of withdrawal for patients lost to follow-up, withdrew consent, and PCR determined reinfection or uncertain PCR outcome. A P ≤ 0.05 was considered statistically significant.

A total of 590 participants were included in the analysis. Baseline characteristics of the study participants are presented in Table 1. Patients in the 2007–2008 cohort were all under the age of 5 years, a majority were febrile, anemic, and had higher mean parasite density.

Baseline characteristics of the study participants

. The figure shows that the cure rate remained high across years regardless of a significant increase in prevalence of Pfmdr1 N86 and Pfcrt K76 between 2007 and 2014.

The main strength of this report is that it has been able to evaluate the AL cure rate before and after the implementation of AL treatment policy in Bagamoyo district. However, in the 2006 cohort the subjects were followed for 3 days only, therefore, it was difficult to predict the drug's cure rate on day 28. Furthermore, there was significant differences in the mean age and baseline parasitemia between the 2014 cohort and other cohorts. Nonetheless, we believe these limitations have not affected the validity of our findings.

The AL cure rate remained high after 8 years of wide-scale use in Bagamoyo district for the treatment of uncomplicated P. falciparum malaria despite an increase in the prevalence of pre-treatment Pfmdr1 N86 and Pfcrt K76 between 2006 and 2014.