The clinical course of the case. Day: the days after the hospitalization. 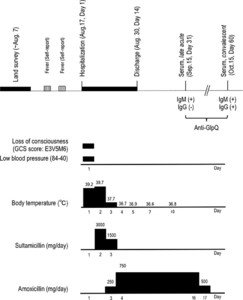 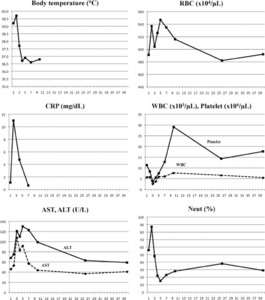 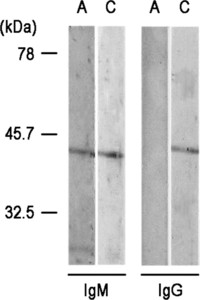 We herein report a case of suspected Borrelia miyamotoi disease in Hokkaido, Japan. The patient complained of lassitude, arthralgia, and high fever after a tick bite. Furthermore, at the time of consultation, the patient exhibited momentary loss of consciousness and low blood pressure. Laboratory tests revealed elevation of liver enzymes, thrombocytopenia, and increased C-reactive protein. Seroconversion to B. miyamotoi glycerophosphoryl diester phosphodiesterase antigen suggested the patient was infected with a relapsing fever group Borrelia species.

Borrelia miyamotoi is a spirochete belonging to the relapsing fever group Borrelia, and is distantly related to the borreliae that cause Lyme disease. It was first discovered in Japan in 1995 by Fukunaga and others1 and is transmitted there by the tick species Ixodes persulcatus, which is also the primary vector tick of Lyme disease in Japan.2 Borrelia miyamotoi infection (B. miyamotoi disease: BMD) causes a variety of symptoms including relapsing fever. The first human cases were reported in Russia in 2011.3 Since 2013, BMD cases have been reported in northern hemisphere countries.4 In 2014, through retrospective investigation of confirmed Lyme disease patients in Japan, sera from two patients were shown to also contain B. miyamotoi DNA in their serum.5 Since 2013, we have conducted prospective serodiagnosis for Lyme disease and/or BMD and have now detected the first symptomatic case in Japan of BMD without coinfection with Lyme disease Borrelia, Babesia spp., or Anaplasma phagocytophilum.

The patient was a previously healthy 64-year-old Japanese man surveyor living in Hokkaido, Japan, where Lyme disease is endemic. He entered the hills and fields for outdoor work routinely. He did not have any history of travel abroad. His latest field activity was 10 days before onset. The patient was later able to recall a hard tick bite to his left shoulder during this latest excursion. However, he was unable to identify the tick species or whether the tick was visibly engorged.

At the time of consultation on August 17, 2013, the main complaint was lassitude, arthralgia, and relapsing fever (Figure 1

). Furthermore, in the waiting room of the hospital, the patient was observed by health-care works to exhibit momentary loss of consciousness and low blood pressure (84–40 mmHg). He had a fever of 38.6°C and his Glasgow Coma Scale score was 14 (E3V5M6), requiring hospitalization. His body temperature increased to 39.2°C during the night of hospitalization (day 1). A diffuse macular erythematous rash was noted on his torso (day 1), which disappeared within a week. Magnetic resonance imaging of the brain showed no abnormalities. Evidence of tick bite or erythema migrans was not found.

. Elevated C-reactive protein (panel B), alanine aminotransferase (panel C), and aspartate aminotransferase (panel C) were noted. Red blood cell (panel D) and white blood cell (panel E) counts were almost within reference range. Neutrophilia (panel F) was noted only on day 2 of hospitalization, but neutrophils fell to below reference range on day 4. Thrombocytopenia was noted from days 1 to 5 of hospitalization.

Although the etiology was not identified during initial evaluation, the patient was prescribed penicillin derivative antibiotics (sultamicillin and amoxicillin) from day 2 to day 17 (Figure 1). Serological examination for Lyme disease, BMD, anaplasmosis, and babesiosis were performed on late acute (day 31) and convalescent (day 60) phase serum samples. Lyme disease was ruled out by serodiagnosis using the commercial immunoblot kit: recomLine Borrelia IgG/IgM (MIKROGEN DIAGNOSTIK, Neuried, Germany). The patient sera reacted only to p41 antigen from Borrelia burgdorferi sensu stricto in both IgM and IgG and were therefore seronegative. On the other hand, the patient was seropositive against a recombinant glycerophosphoryl diester phosphodiesterase (rGlpQ) antigen5 in paired serum samples. For the serological test to BMD, rGlpQ originated from B. miyamotoi strain HT31 (accession number. AB900798) was used. The purified rGlpQ (0.1 μg) was used for immunoblotting assay. The dilution of each patient's serum sample was 1:200. By this assay, a rise in IgG level was noted: acute phase serum showed IgG (−)/IgM (+) and convalescent phase serum showed IgG (+)/IgM (+) (Figure 3

). The patient was diagnosed with BMD based on the seroconversion to anti-B. miyamotoi GlpQ antibody. In retrospect, the medical data, with the exception of the neutropenia, were considered consistent with the characteristics of BMD. Based on negative serologic testing,6,7 there was no evidence of coinfection A. phagocytophilum or Babesia spp. (data not shown). On antibiotics, the fever gradually subsided, and the symptoms abated. Antibiotics, sultamicillin and amoxicillin, were thought to be effective for this case.

Real-time PCR for detection of Borrelia DNA and quantitative PCR for estimation of the number of copies of DNA were also performed on late acute phase serum as previously described.5,8 In this case, borrelial DNA was not detected and may have been below the detection limit. Molloy and others9 suggested detection of a borrelial DNA from clinical specimens is likely a superior method of diagnosis compared with serology. However, they also reported serological diagnosis (e.g., seroconversion) is an acceptable alternative when bacterial DNA is not detected.9,10

The patient was able to recall a tick bite, and he did not have any history of travel abroad, including to endemic areas of classical relapsing fever (e.g., African countries, south European countries, and North America).11 A domestic case of relapsing fever due to other Borrelia species has not been reported in Japan since the 1950s.12 Serodiagnosis using B. miyamotoi GlpQ-antigen is specific to relapsing fever group borreliae,13 and the clinical and epidemiological data are consistent with B. miyamotoi infection.

Hokkaido is located in the northern part of Japan, and I. persulcatus, which is thought to transmit B. miyamotoi, is ubiquitously found throughout Hokkaido. This is the first report in Japan of human B. miyamotoi illness without coinfection. In this case, laboratory tests were performed and monitored for 40 days after onset of disease. This report should alert physicians in the region to be aware of BMD when examining patients with suggestive symptoms.