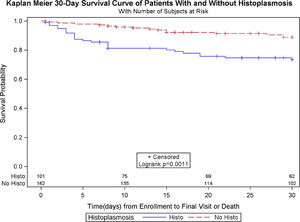 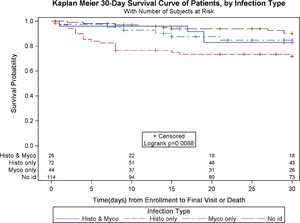 Histoplasmosis is an infection caused by inhalation of the fungus Histoplasma capsulatum from contaminated soil. It is the most prevalent mycosis in Central America, and is challenging to diagnose.1–5 The clinical presentation of histoplasmosis ranges from asymptomatic infection or mild respiratory illness to severe disseminated disease.6 Although histoplasmosis can occur among immunocompetent persons, immunocompromised individuals, such as people living with human immunodeficiency virus (HIV)/acquired immune deficiency syndrome (AIDS) (PWAs), are at high risk of developing disseminated disease. In AIDS patients, mortality due to disseminated histoplasmosis may approach 50%, especially in those with severe manifestations.7 Among those at highest risk, clinical manifestations are nonspecific and similar to those produced by other disseminated infectious diseases,6 which can delay diagnosis and treatment. These symptoms include malaise, fever, anorexia, and weight loss; physical examination often shows hepatosplenomegaly, lymphadenopathy, pallor, and petechiae, and in some patients, ulcerations and/or nodules of skin and mucous membranes.6,8,9 These similarities can delay diagnosis and treatment. Guatemala is considered a hyperendemic country for histoplasmosis, with previous surveys showing a 23–81% range of skin test positivity to the histoplasmin skin test antigen.10 However, reports of clinical disease and outcomes from the country are limited and based mainly on case reports, traveler-associated outbreaks, and one study that evaluated symptoms and risk factors in eight histoplasmosis cases.1,11,12 In 2005, a new assay for detection of Histoplasma antigen in urine was developed and validated in Guatemala.13 During the assay evaluation, we prospectively enrolled patients who had symptoms consistent with histoplasmosis. Herein, we describe clinical presentation and outcomes of disseminated histoplasmosis in patients attending a large urban HIV clinic in Guatemala.

A prospective cohort study was conducted among patients attending to an HIV clinic (Clínica Familiar “Luis Ángel García”), housed within a large public hospital in Guatemala City, Guatemala. All HIV-positive patients who were ≥ 18 years of age and visited the clinic between February 2005 and March 2009 were eligible for enrollment as suspected cases if they presented with three of five of the following clinical criteria: fever, pancytopenia, weight loss, skin or mucosal lesions indicative of histoplasmosis, or radiological evidence suggestive of histoplasmosis. Informed consent was obtained from all enrolled participants, and clinic personnel performed a baseline questionnaire and laboratory evaluation at the initial visit. Additional clinical data were collected at subsequent clinic follow-up visits. Clinical and demographic data were collected and stored on-site in a Microsoft® Access database (Microsoft Corporation, Redmond, WA) developed for this study.

Specimens analyzed included blood, urine, cerebrospinal fluid (CSF), bone marrow, lymphatic nodes, or skin depending on the patient's presentation. Blood and bone marrow were processed by lysis centrifugation and were subsequently cultured using Mycosel™ (BD, Franklin Lakes, NJ), Sabouraud, and Lowenstein–Jensen media to detect fungi and mycobacteria; it was done locally. Urine was tested for Histoplasma antigen by enzyme-linked immunosorbent assay (ELISA) at Centers of Disease Control and Prevention (Atlanta, GA).13,14 Mycobacteria were detected with Ziehl–Nielsen stain or culture, but speciation was only to Mycobacterium tuberculosis. All CSF and tissue biopsies were stained with Giemsa, Gram, and Ziehl–Nielsen and were subsequently cultured for bacteria, mycobacteria, and fungi as above. Additionally, CSF samples were evaluated for the presence of Cryptococcus spp. by microscopy with India ink stain and/or with the Cryptococcus latex agglutination (BIO-RAD; New South Wales, Gladeswille, Australia). Other diagnostic tests included complete blood cell count, liver function tests, and lactate dehydrogenase (LDH).

Clinical data were analyzed using SAS 9.3. χ2, Fischer's exact, and Wilcoxon rank-sum tests were used to perform bivariate analysis, as appropriate. Kaplan–Meier survival analysis was performed to compare mortality among cases and by infection. Factors associated with survival with a significance level of P < 0.05 were included in the model.

Etiology of infection among patients suspected to have histoplasmosis, by patient (N = 263 patients) and by disease frequency (N = 218 infections)

Demographic and clinical characteristics of patients suspected to have histoplasmosis, by etiology of infection identified

Disseminated histoplasmosis remains an important and deadly opportunistic infection among PWAs. Although Guatemala is a hyperendemic area for histoplasmosis, laboratory detection is limited, and this disease remains underrecognized. This report describes one of the largest cohorts of histoplasmosis patients in Latin America, and is the first study to describe histoplasmosis presentation, coinfection, and outcomes among PWAs in Guatemala.10

Patients coinfected with Histoplasma and Mycobacterium had better survival rates than those infected with Histoplasma alone; yet median CD4 counts were lower among patients with both infections (19 versus 32) (Figure 2). A possible explanation for this finding could be that M. tuberculosis regulates the production of several cytokines.16,17 The control of tuberculosis by the host defenses involves a balance between pro-inflammatory and anti-inflammatory responses. Among these, tumor necrosis factor (TNF)-α, interleukin-12, and interferon (IFN)-γ are key to control the dissemination and severity of histoplasmosis.16–18 In patients with active tuberculosis, T cells secreting IFN-γ and TNF-α are frequent.17 On the other hand, the inhibition of TNF-α exacerbates histoplasmosis in mice.18 We hypothesize that in patients with HIV coinfected with M. tuberculosis and Histoplasma, the active M. tuberculosis infection and its effects on the increased production of TNF-α and IFN-γ acts as a semiprotective mechanism against histoplasmosis, a mechanism that is absent in HIV patients infected with Histoplasma alone. Further evidence is required to test this hypothesis. Treatment of these coinfected patients presents special challenges. Rifampin, a first-line drug for treatment of mycobacterial infections, induces cytochrome P450 enzymes that metabolize azoles, effectively reducing azole serum concentrations by more than half, while increasing rifampin concentrations when the two are coadministered.19,20 Thus, rifampin and itraconazole cannot be administered together,21 moxifloxacin, a first-line fluoroquinolone used to treat rifamycin-resistant tuberculosis, does not interact with itraconazole,22 and may be an effective replacement for rifampicin in coinfected patients,15 but is cost-prohibitive in resource-limited settings.

At the time of presentation, over 23% of patients in this study had symptoms consistent with histoplasmosis, and more than one-third of these patients died. These findings are consistent with those in Brazil and French Guiana, where most studies on histoplasmosis in Latin America have been performed.1,3,23,24 In French Guiana in the post–highly active ART (HAART) era, histoplasmosis was the most commonly diagnosed AIDS-defining illness, with an incidence of 15.4/1,000 person years.24 Disseminated histoplasmosis has been estimated to occur in 2–5% of PWAs who live in endemic regions.1

Clinical features of AIDS-associated histoplasmosis in this cohort were similar to those published elsewhere in Latin America, where fever, pulmonary and GI symptoms are most frequent.7,25 A high prevalence of mucosal and skin involvement has been described throughout Latin America and has been attributed to the possible greater virulence of the South American species26–29 as well to delayed diagnosis.3,29 The prevalence of skin lesions in our cohort was greater than in the United States (1–7%) but less than what has been reported in South America (53–93%).3 Our study found no statistically significant differences in clinical symptoms or signs that might aid in distinguishing Histoplasma infections from other diseases; since nonspecific symptoms such as malaise and cough can be confused with tuberculosis, bacterial pneumonia, and other febrile illnesses, clinical diagnosis remains challenging.3,15

Laboratory abnormalities, including pancytopenia, elevated LDH, and cholestatic hepatitis have been previously described as possible predictors of disease and mortality.30–32 We found similar laboratory abnormalities in our bivariate analyses but were unable to evaluate them further in multivariate modeling due to limitations in the data. However, combining clinical data and laboratory markers could be useful in developing a score as a mortality predictor.

Many patients received antifungal therapy if there was clinical suspicion of disease. In patients with histoplasmosis who did not receive initial antifungal therapy and for whom information was available, almost all cases had died before the diagnosis was made. This finding highlights the need for rapid diagnosis to improve treatment management and outcomes. Additionally, at follow-up visits, some patients with histoplasmosis were started on empiric antifungal treatment before diagnosis in response to clinical improvement or because clinicians had excluded other infections such as tuberculosis.

Mortality rates among immunocompromised individuals reported in other South American studies are similar to that found in our study (19–39%)3,27,33,34 and are higher than rates reported in the United States35–38 except in circumstances where PWAs are diagnosed late or are not receiving HAART.7,38 Compared with patients diagnosed with mycobacterial and other opportunistic infections, patients with histoplasmosis had a shorter median survival time, and time to diagnosis neared time to death in many instances. These findings highlight both a need to use faster diagnostic methods and to have a low threshold for empiric treatment of immunocompromised individuals with symptoms and signs consistent with histoplasmosis.

This study is subject to several limitations. Data were not uniformly available for each patient, and histoplasmosis diagnosis using the ELISA assay could not be performed in real time, which could have improved the outcome of some of the patients.

In spite of these limitations, this study provides the first data in Guatemala to describe Histoplasma and Mycobacterium coinfections and outcomes among PWAs. Rapid and accurate diagnostics for both histoplasmosis and mycobacterial infections are essential, since their symptoms are similar and often indistinguishable. To facilitate earlier diagnosis of histoplasmosis, we suggest consideration of a screening algorithm that includes antibody detection in serum, antigen detection in urine, polymerase chain reaction in blood or pulmonary samples, and fungal culture for pulmonary and blood samples. In parallel, tests for M. tuberculosis could be carried out to complement the differential diagnosis. In addition, early presumptive treatments could help to improve patient's survival.

Although histoplasmosis mortality is currently high in many developing countries, a urine Histoplasma antigen assay that is accessible and available throughout Latin America has the potential to drastically improve patient outcomes.