(A) Colonies of Talaromyces marneffei producing red diffusible pigment on Sabouraud dextrose agar incubated at 35°C. Conversion from (B) the mycelial form at 30°C to (C) the yeast form at 37°C on brain-heart infusion agar medium (×400). 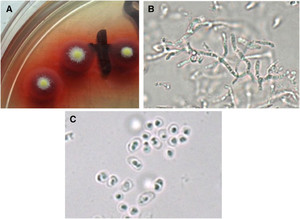 Talaromyces marneffei is a dimorphic fungus endemic mainly in southeast and south Asia. It causes severe mycosis, usually in immunocompromised individuals, such as those with human immunodeficiency virus (HIV) infection. Concomitant infection with T. marneffei and other opportunistic pathogens is plausible because the majority of T. marneffei infections occur in patients with advanced HIV infection. Nonetheless, coinfection in the same site has rarely been reported, and poses a considerable diagnostic and therapeutic challenge. We report the case of an HIV-infected Japanese patient who had lived in Thailand for 6 years. The patient developed T. marneffei and Mycobacterium tuberculosis coinfection, and both pathogens were isolated from the same sites: a blood specimen and a lymph node aspirate. Clinicians should be aware of concomitant infection with T. marneffei and other pathogens in patients with advanced HIV disease who are living in or who have visited endemic areas.

Talaromyces marneffei, previously classified as Penicillium marneffei, is a thermally dimorphic fungus. It can cause disseminated and fatal mycosis, referred to as penicilliosis marneffei, mainly in immunocompromised individuals.1 It is only endemic in southeast Asia (Thailand, Laos, Cambodia, Malaysia, Myanmar, and Vietnam), northeast India, southern China (including Hong Kong), and Taiwan.2 Talaromyces marneffei infection is an important opportunistic illness in human immunodeficiency virus (HIV)–infected patients living in or who have visited endemic areas. As of July 2015, 11 cases of T. marneffei infection have been reported in Japan; all had a history of traveling to or living in endemic countries and nine were HIV infected.3

Concomitant infection with T. marneffei and other opportunistic pathogens is plausible because the majority of cases of severe mycosis due to T. marneffei occur in patients with advanced HIV infection with a CD4+ T lymphocyte count below 100 cells/μL.4 Pneumocystis jirovecii pneumonia (PCP), tuberculosis, cytomegalovirus diseases, cryptococcal diseases, and salmonellosis are not rare concomitant infections in such patients.5–8 Nonetheless, concurrent isolation of T. marneffei and Mycobacterium tuberculosis from both blood and a lymph node specimen is unusual, with few similar reports available to date. In addition, such simultaneous infections pose major diagnostic and therapeutic challenges for the clinician. We report a case of T. marneffei and M. tuberculosis coinfection in an HIV-infected Japanese patient where both pathogens were isolated from the same sites (a blood specimen and a lymph node aspirate).

A Japanese man in his late seventies presented with a 2-month history of loss of appetite and general malaise. During this time, he had lost approximately 10 kg body weight. His past medical history was not significant. He was heterosexual, and denied having sexual intercourse with men. He was retired and had been living in central Thailand for 6 years at the time the symptoms developed; he returned to Japan thereafter (May 2015). One week later, upon noticing a fever without additional symptoms, a urinary tract infection was diagnosed, based on pyuria. HIV infection was also identified. Levofloxacin (500 mg once daily for 14 days) was started and effectively treated the fever and malaise.

The patient was then referred to our hospital. A chest X-ray and computed tomography (CT) scan revealed mild ground-glass opacities in a patchy distribution in both lungs. His CD4+ T lymphocyte count was 77 cells/μL, serum HIV-1 RNA was 2,400,000 copies/mL, and plasma concentration of β-D-glucan was 47.5 pg/mL (reference ≤ 20 pg/mL). A serum Aspergillus galactomannan antigen test was negative (cutoff index value < 0.5). Sputum cultures for respiratory pathogens, including mycobacteria and fungi, were negative. Sputum cytology testing was not performed. Although the patient had no cough, dyspnea, or desaturation, an atypical pneumonia such as PCP was considered and atovaquone (750 mg twice daily) was administered, without concurrent corticosteroids. Three weeks after initiation of atovaquone, the ground-glass opacities had diminished, plasma β-D-glucan levels had returned to normal (5.2 pg/mL), and the patient’s general condition was good.

Four weeks after starting atovaquone (July 2015), he began to experience daily fevers and severe malaise. Initiation of antiretroviral therapy (ART) was reluctantly postponed, and he was admitted to our hospital for workup and management of the fever. On admission, he was alert but was occasionally confused during periods of high fever. His body temperature was 39.6°C; blood pressure, 142/88 mmHg; pulse rate, 86/minute; respiratory rate, 22/minute; and oxygen saturation, 95% in ambient air. There were no features of meningismus, including neck stiffness, headache, or Kernig’s sign. His breath sounds were normal. Systolic ejection murmurs were heard, loudest over the cardiac apex, without extra heart sounds. The abdomen was flat and soft, and the liver and spleen were impalpable. There were no palpable lymph nodes in the cervical, axillary, and inguinal regions. No skin lesions were observed despite extensive inspection. The patient’s laboratory test results were as follows: white blood cell count, 4,730/μL; hemoglobin concentration, 8.2 g/dL; platelet count, 93,000/μL; aspartate aminotransferase, 66 U/L; lactate dehydrogenase, 344 U/L (reference 110–220 U/L); sodium concentration, 129 mmol/L; and potassium concentration, 3.0 mmol/L. The patient’s plasma β-D-glucan level again increased to 60.9 pg/mL, and the repeat Aspergillus galactomannan antigen test was positive (index value of 4.5). His interferon gamma release assay result was negative.

). No pulmonary infiltrates were observed, but a small amount of pleural fluid was demonstrated bilaterally. Blood cultures drawn on admission grew fungi after 5 days of incubation. The fungi grew as fluffy greenish colonies that produced red diffusible pigment on Sabouraud dextrose agar at 35°C (Figure 2A), suggestive of T. marneffei.4 Hence, treatment with liposomal amphotericin B (5 mg/kg) was started on the sixth day of hospitalization. An aspirate from a supraclavicular lymph node, obtained on day six, also yielded the fungus. Both acid-fast staining and polymerase chain reaction (PCR) for Mycobacterium avium complex of the lymph node aspirate yielded negative results (PCR testing for M. tuberculosis was not performed simultaneously).

The fungus was in the mycelial form at 30°C (Figure 2B) and converted to the yeast form when incubated at 37°C (Figure 2C) on brain-heart infusion agar medium. Microscopic morphology revealed penicillia with septate hyphae, phialides, and conidia. It was identified as T. marneffei by sequencing of the internal transcribed spacer region of ribosomal DNA. Although follow-up blood cultures showed no fungal growth, the patient continued to experience high fevers and became severely exhausted. He died 12 days after hospitalization, despite antifungal therapy. Mycobacterium tuberculosis was cultured from the blood sample and lymph node aspirate obtained on admission 8 and 4 weeks after the patient died, respectively. The M. tuberculosis strain cultured demonstrated susceptibility to isoniazid, rifampin, ethambutol, streptomycin, and levofloxacin.

The major clinical manifestations of T. marneffei infection in HIV-infected patients include fever (93–97%), malaise (91%), skin lesions (28–81%), lymphadenopathy (33–62%), cough (40–49%), anemia (78–79%), and abnormal chest radiograph findings (45%).5,6 These are similar to the symptoms of tuberculosis, nontuberculous mycobacterial infections, cryptococcosis, histoplasmosis, melioidosis, and nocardiosis, although cutaneous lesions occur less frequently in cases of mycobacterial infections. Therefore, clinicians should differentiate between T. marneffei infection and these mycobacterial, fungal, and intracellular bacterial diseases in HIV-infected individuals. Furthermore, this case highlights that the clinician should consider dual infections with organisms that can exhibit similar symptoms. This is especially true when the response to initial (single) treatment is unfavorable.

The U.S. Department of Health and Human Services guideline16 recommends primary prophylaxis against penicilliosis for HIV-infected patients with a CD4+ T lymphocyte count < 100 cells/μL who reside in northern Thailand, Vietnam, and southern China (particularly in rural areas). We did not provide primary prophylaxis to this patient because he had lived in central (not northern) Thailand. Clinicians should be aware of the need to provide high-risk individuals with appropriate prophylaxis. The guideline also recommends that ART be initiated within 2 weeks of PCP treatment.16 This patient could not be started on ART within 2 weeks, partly due to Japan’s national system of medical fee aid for ART. This system requires two separate CD4 and HIV RNA viral load test results, obtained at least 4 weeks apart, for acceptance of the application for medical fee aid. Nonetheless, ART should be initiated as early as possible according to the guideline’s recommendation.

In summary, although rare, concurrent septicemia and lymphadenitis due to T. marneffei and M. tuberculosis coinfection can occur. This poses significant diagnostic and treatment challenges. Clinicians should keep in mind the possibility of concomitant infection with T. marneffei and other opportunistic pathogens in patients with advanced HIV disease who live in or have visited endemic areas.