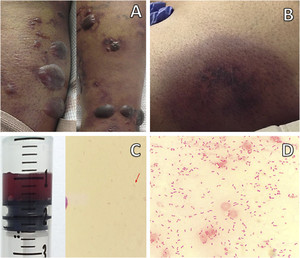 Vibrio vulnificus is a Gram-negative halophilic bacilli endemic to coastal regions of warm temperate climates.1 Gram staining will often reveal a short, slim, and curved Gram-negative bacillus under light microscopy. Vibrio vulnificus is a potentially lethal pathogen and the leading cause of seafood-related death in the United States.2 High rates of infection are reported in Taiwan, South Korea, Japan, and Gulf of Mexico of the United States.1 Exposure to V. vulnificus occurs either through direct contact with a contaminated water source or seafood (handling or ingestion) which can lead to gastroenteritis, skin and soft tissue infection (often necrotizing), or septicemia.2–4 Our patient was lacking any contact with a salt water source but did ingest shrimp purchased from a roadside stand 2 days prior to his presentation. Septicemia can be a primary process (foodborne) or secondary to an invasive wound infection.1–3 Liver disease is the most notable risk factor for developing primary V. vulnificus septicemia with 96% of patients reporting consumption of raw or undercooked oysters within 7 days of illness.4,5 The case fatality rate is estimated between 34% and 61% in this population.2–5 In primary V. vulnificus septicemia, erythematous and bullous skin lesions can appear within the first 24 hours after symptom onset, indicating an early sign of a potentially fatal disease.2,5