Distribution of ranks. Box and whiskers plots (top) and kernel density plots (bottom) depicting the distribution of ranks are shown for each of the World Health Organization (WHO) 1981 trachomatous scarring grades. The dashed lines represent the thresholds between each WHO grade as determined from the ranks. Note that thresholds were calculated by minimizing misclassifications on each side of the threshold—this is not necessarily where adjacent grades had the same density (i.e., thresholds were not defined by where the density curves cross). 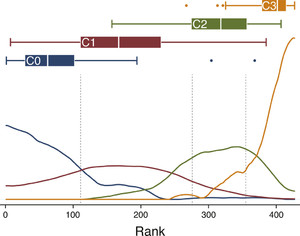 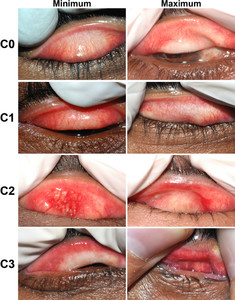 We evaluated a new trachoma scarring ranking system with potential use in clinical research. The upper right tarsal conjunctivas of 427 individuals from Ethiopian villages with hyperendemic trachoma were photographed. An expert grader first assigned a scar grade to each photograph using the 1981 World Health Organization (WHO) grading system. Then, all photographs were ranked from least (rank = 1) to most scarring (rank = 427). Photographic grading found 79 (18.5%) conjunctivae without scarring (C0), 191 (44.7%) with minimal scarring (C1), 105 (24.6%) with moderate scarring (C2), and 52 (12.2%) with severe scarring (C3). The ranking method demonstrated good internal validity, exhibiting a monotonic increase in the median rank across the levels of the 1981 WHO grading system. Intrarater repeatability was better for the ranking method (intraclass correlation coefficient = 0.84, 95% CI = 0.74–0.94). Exhibiting better internal and external validity, this ranking method may be useful for evaluating the difference in scarring between groups of individuals.

Trachoma is the leading infectious cause of blindness in the world. Caused by Chlamydia trachomatis, conjunctival infection results in an inflammatory response marked by the presence of follicles and papillary hypertrophy on the tarsal conjunctiva.1 Repeated or chronic infections and the associated inflammation frequently lead to conjunctival scarring. This conjunctival scarring, in turn, causes inward deviation of the eyelashes (trichiasis) or the lid margin (entropion), which in turn leads to corneal opacity and blindness.

Trachomatous scarring (TS) could be an important metric for trachoma researchers and program managers, since it is an indicator of the person-time of prior infection and inflammation and also a predictor of future trichiasis and blindness. The World Health Organization (WHO) simplified trachoma grading system, which has been widely adopted by trachoma control and research programs for grading conjunctival inflammation in children and trichiasis in adults, includes a category for grading conjunctival scarring.2 According to the WHO system, TS is defined as easily visible white lines, bands, or sheets in the tarsal conjunctiva. However, these findings can be difficult for non-ophthalmic personnel to identify, and even ophthalmic health personnel tend to have worse agreement for this grade in comparison with the other signs in the WHO system.3 Perhaps because of the relative subjectivity of the staging system and consequent difficulty in standardizing the grade between independent examiners, the WHO TS grade has not been commonly used by trachoma control programs or in research.

This study used images taken in November 2011 in six communities from the Goncha Siso Enesie woreda, Amhara Region, Ethiopia, during a regularly scheduled study visit for a larger cluster-randomized trial (clinicaltrials.gov identifier: NCT01202331). The study area was hyperendemic for trachoma; the prevalence of the inflammatory signs of trachoma (follicular trachoma [TF] and/or intense trachomatous inflammation [TI] according to the WHO simplified grading system) among 1- to 10-year-old children was approximately 60–70% in 2006—before several rounds of mass azithromycin treatment were administered.4 For the present study, a random sample of individuals aged ≥ 10 years from each community was selected for conjunctival photography. Each study participant had the right upper eyelid everted and underlying tarsal conjunctiva photographed with a single-lens reflex camera equipped with a 105/2.8ƒ macro lens using a standardized protocol (aperture priority, aperture ƒ/40, ISO 400, native flash engaged, automatic white balance, at least two high-quality photographs taken).

Photographs were graded by an expert grader (JDK) according to the four grades of the 1981 WHO grading system: C0 (no scarring), C1 (minimal scarring), C2 (moderate scarring), and C3 (severe scarring). The same group of photographs was subsequently ranked by the same grader from least to most scarring, with the grader masked to the results of his 1981 WHO grading. The photographs were ranked using custom-designed software that implemented the Ford Johnson algorithm to assign ranks. The algorithm dealt with ties by arbitrarily ranking one as higher than the other; for ties where one observation was already in the main chain but the other was not, the observation not yet in the main chain was inserted directly behind the observation that was already ranked.5 Because the prevalence of conjunctival scarring in trachoma-endemic places is known to increase with age,2,4,6–9 external validity of the grading and rankings was assessed by calculating the correlation of each with age in years, and reported as a Spearman's correlation coefficient. Intrarater reliability was assessed by masked regrading of a random 5% of the photographs and calculation of the intraclass correlation coefficient (ICC).

Photograding for diabetic retinopathy makes use of standard photographs that serve as thresholds to indicate the presence of a specific sign.10 The current WHO grading system does not make use of threshold photographs, but we thought the ranking method could be used as a way to determine threshold photographs directly from data. Therefore, as a demonstration of this technique, we cross-tabulated the ranks by the WHO grades and identified three sets of ranks that overlapped different WHO categories (i.e., the ranks in between the highest C0 rank and the lowest C1 rank, in between the highest C1 rank and lowest C2 rank, and in between the highest C2 rank and lowest C3 rank). We then took the median rank from each set of overlapping ranks (i.e., C0 and C1 ranks, C1 and C2 ranks, and C2 and C3 ranks), after first normalizing the distribution of rankings for each WHO grade such that each distribution contained the same number of ranked observations. We defined the next rank after the median as the minimum threshold necessary for each WHO category.

Because scarring progresses over time, the correlation between scarring and age was assessed as a test of external validity. In these analyses, the ranking method was slightly more correlated with age (Spearman ρ = 0.40) than was the WHO grading (Spearman ρ = 0.35). Intrarater repeatability was also better for the ranking method (ICC = 0.84, 95% confidence interval [CI] = 0.74–0.94) compared with the 1981 WHO grading system (ICC = 0.74, 95% CI = 0.58–0.90). Figure 2 shows the estimated lowest and highest ranked photographs for each WHO grade, after accounting for the overlapping ranks. The figure depicts the range of scarring for each WHO grade as judged by the study grader from this dataset; specifically, the figure shows the minimum amount of scarring required and also the maximum amount of scarring allowed for each progressive WHO category.

The WHO-simplified grading system defines TS as easily visible white lines, bands, or sheets in the tarsal conjunctiva.2 These findings can be subjective and difficult to standardize, especially for non-ophthalmic personnel, but even for trachoma experts.3 This study demonstrated that conjunctival scarring can be assessed from photographs and that ranking the degree of scarring may provide a more precise method for assessment of the cicatricial signs of trachoma. This ranking procedure could be especially useful in comparative research studies that include conjunctival photography, since masked grading could be performed and a rank sum test could compare the degree of scarring in two groups of individuals.

The ranking procedure, while useful in its own right as an outcome for research, could also be helpful for trachoma programs since it could be used to define minimum thresholds for the WHO-simplified grading system. This method could be repeated with a larger number of both ophthalmologists and conjunctival photographs to more precisely define the minimum amount of scarring needed to diagnose TS—similar to the standard photographs from the Early Treatment of Diabetic Retinopathy Study.10 A similar methodology could be performed for TF and TI, which also would benefit from clarification on the minimum amount of disease needed to be classified as clinically active.

The main limitations of this study are its inclusion of a single population in Ethiopia and its reliance on rankings performed by a single person. Future validation of this ranking method should include more diverse populations, multiple graders, and non-ophthalmologist graders to fully assess its feasibility and validity.

In summary, a ranking method for TS could be used to establish data-driven minimum thresholds for WHO trachoma grading categories, and could also be used as an outcome in trachoma research. Trachoma researchers should consider including conjunctival photography and a similar type of scar-ranking procedure in any study seeking to determine whether an intervention reduces the overall person-time of infection and inflammation, and hence, scarring.