(A) Nodule with yellow crust on the right leg of a patient with primary yaws. (B) Photomicrograph of skin biopsy showing yaws lesions. Spirochete organisms are stained bright red by the Treponema pallidum immunohistochemical stain (× 400 magnification). (C) Loss of clarity of the cortex of the distal radius and ulna and organized periosteal reaction. (D) Resolution of bone lesions at 4 weeks after azithromycin treatment. 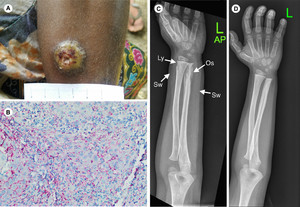 The etiologic agent of yaws, Treponema pallidum subsp. pertenue, causes a multistage infection transmitted by nonsexual contact with the exudates from active lesions. Bone lesions in the form of osteoperiostitis are common and occur in numerous bones simultaneously in early stages. Although a multinational eradication campaign with mass administration of intramuscular benzathine benzylpenicillin in the 1950s greatly reduced its global incidence, a resurgence of yaws has occurred since around 2000 in western and central Africa and the Pacific Islands. The finding that a single oral dose of azithromycin (30 mg/kg) was as effective as benzathine benzylpenicillin prompted renewed interest by World Health Organization in 2012 toward eradication of this infection by 2020. We previously reported the excellent response to benzathine benzylpenicillin therapy for yaws osteoperiostitis. Herein, we document a confirmed case of yaws with osteoperiostitis successfully treated with single-dose azithromycin and discuss the pathology of yaws periostitis and comment on the implications of this in light of the new campaign toward yaws eradication.

A 5-year-old boy was admitted at the Lihir Medical Center, Lihir Island, Papua New Guinea, presenting with a yellow-crust nodule on his right foreleg (Figure 1A) and with a swollen and tender left wrist. His mother stated that the lesion started 4 weeks before admission as a small papule and developed into a large nodule 4 cm in diameter that ulcerated. The nodule was nontender and exuded a yellow discharge. The pain on his wrist started 2 weeks later when a sibling twisted his hand backward.

X-ray of the forearm showed an exuberant lamellar periosteal reaction in the distal end of the left ulna associated with underlying osteomyelitis (Os in Figure 1C). Mild osteoporosis and lytic areas in the distal metaphysis were present in both bones ulna and radius. Lytic lesions were more evident in the external side of the radius metaphysis (Ly in Figure 1C). No sequestra were present and the epiphysis was not affected. There was also fusiform soft-tissue swelling adjacent to the bone lesion (Sw in Figure 1C). Serological tests for treponemal infection were both positive: rapid plasma reagin (RPR) with a titer 1:256 and Treponema pallidum hemagglutination test; routine hematology and biochemistry investigations were unremarkable. A skin biopsy showed a surface scale crust, acanthosis, and parakeratosis; there were abundant neutrophils within the epidermis, and a mixed inflammatory infiltrate which included prominent plasma cells in the superficial and mid dermis. Immunohistochemistry demonstrated abundant spirochetes at ×400 magnification (Figure 1B). No other microorganisms where identified with special stains (Gram, Grocott, Periodic acid-Schiff, Wade–Fite, and Ziehl–Neelsen). Lesional swab polymerase chain reaction (PCR) detected T. pallidum DNA using gene targets tp0548 and tpN47 (tp0574).1 To distinguish between subspecies of treponemes that cause yaws or syphilis (T. pallidum subsp. pallidum), a specific region of the tprL (tp103) was PCR amplified which confirmed the presence of T. pallidum subsp. pertenue DNA.1 The patient was treated with a single 500-mg oral dose of azithromycin. At 4 weeks follow-up, both the skin nodule and the bone lesions had resolved as well as the soft-tissue swelling; only a residual compact periosteal thickness could be observed on the X-ray (Figure 1D). At 6 months follow-up the RPR titer had decreased by two dilutions, which indicates serological cure. We made a diagnosis of early yaws osteoperiostitis.

Yaws occurs primarily in children < 15 years of age in rural, humid, tropical regions causing painful ulcers on the skin and, if untreated, can lead to destructive lesions of the bones. It is highly infectious and easily transmitted through skin-to-skin contact, presumably after a small skin break. Yaws is divided in early and late stages. Primary lesions usually appear in legs and ankles as a localized papule that ulcerates. Secondary lesions appear a few weeks to 2 years after the primary infection and present as multiple skin lesions with or without bone pain. Alongside the skin, involvement of the bones is one of the cardinal features of secondary yaws.2 The bone changes consist fundamentally of osteoperiostitis with cortical rarefaction and periosteal deposits going on to bony expansion. Spontaneous healing occurs within a few months without treatment. The bones affected in order of frequency are radius, ulna, proximal phalanges, and tibia.3 In rare cases, after more than 5 years of untreated infection, late yaws can manifest with destruction of the bone and deformity.

Comparative archaeological-based characteristics of osseous involvement in treponemal disease showed that the frequency of periostitis and the number of bone groups affected were remarkably higher in yaws compared with syphilis.4 To explain those findings it was hypothesized that infection of the bone in yaws could be due to direct extension from skin lesions, whereas the spread of syphilis is predominantly hematogenous.5 However, contemporary cases of yaws including the case presented here show that the primary skin lesion localization is usually in the lower limb and the affected bones are frequently in the upper limb.2,3 On the other hand, there are no reports of bone biopsy findings in yaws and very few of them exist in syphilis cases. The histopathological examination from a syphilitic osteitis case revealed an inflammatory infiltrate consisting predominantly of lymphocytes and plasma cells.6 Syphilis—which should apply also to yaws—bone disease is probably initially a generalized proliferative periostitis due to vasculitis, occasionally followed by a focal osteitis and eventually osteomyelitis. Nevertheless, different from other bacteria that have endotoxins, spirochetes are scarce in the lesions and their virulence might be attributed greatly to its invasiveness. Diffuse inflammatory bone lesions caused by spirochetes seem to result from swelling of the capillary endothelium but there is little change in the larger vessels. All this accords with proliferative periostitis sparing the bone marrow, which is the major osseous manifestation of early skeletal syphilis.7 Hence, unlike bacterial osteomyelitis, the vascular supply of the bone in yaws is probably not much compromised and treponemes could be more easily eradicated by antibiotic therapy. In our patient, healing was fast with subperiosteal and endosteal deposition of dense new bone after treatment with single-dose azithromycin. Like benzathine benzylpenicillin, a single oral dose of azithromycin (30 mg/kg) has shown an efficacy against yaws of 91% in patients with primary lesions and 100% for patients with secondary lesions,8 including 22 cases with X-ray abnormal findings in the bones (O. Mitjà, personal observation). Further research would be required to elucidate the pathophysiology of yaws osteoperiostitis and understand the mechanisms by which azithromycin treatment is effective for this condition.

Azithromycin has recently been shown to be effective in the treatment and prevention of yaws9 and is now central to World Health Organization's yaws eradication strategy.10 Substituting a single dose of an oral antibiotic for a painful penicillin injection is a significant advantage because infection control measures required for injection of penicillin will no longer be required and treatment will be more acceptable to communities who need it. The principles of the new policies for yaws eradication are based on an initial mass drug administration of azithromycin of all residents of endemic areas followed by targeted treatment to detect and treat cases and contacts. The clinical cure of cases such as the one we present here is reassuring on the use of the current strategy for the eradication of yaws.11