Motorcycle taxi in N'Diop, a rural village in the Guinean–Sudanian zone in Senegal with 400 inhabitants. 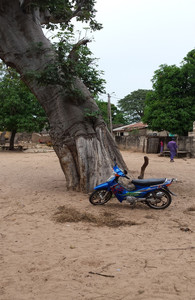 Motorcycles, Cell Phones, and Electricity Can Dramatically Change the Epidemiology of Infectious Disease in Africa

Some observations and recent publications demonstrated, particularly in Africa, the potential influence that low-cost motorcycles, cell phones, and even widespread electrification could have on the evolution of infectious diseases, particularly zoonoses. Our reflections support the conclusion that we should focus on the real-time surveillance systems including alerting systems leading to a rapid and flexible response rather than the strongly limited modeling of infectious diseases because of the continuous evolution of microorganisms, as well as changes in the environment and human habits that are unpredictable.

Throughout history, human displacements have frequently led to large epidemics. As an example, travelers on ships were responsible for large plague outbreaks, leading major ports to organize quarantines.1 More recently, such transports may also be responsible for expanding worldwide vectors, as has been the case for Aedes albopictus, the current main vector of dengue fever and chikungunya.2 Its global spread has been facilitated by the expansion of transportation, particularly the tyre trade transported on ships.2 In addition, human travel, whatever the means of transport, by foot, horseback, camelback, or more recently by plane, has also been the means of transport for microorganisms. Currently, different scenarios explaining the causes of the large number of cases in the 2014 western Africa Ebola outbreak have been debated, but it seems essential to remember that the first suspected case resided in Meliandou, in Gueckedou prefecture, Guinea. This area is close to the main road to Conakry and is close to the Sierra Leone and Liberia borders,3 criteria that have favored a rapid spread. Indeed, the rapid evolution in the means of transport in Africa must be recalled. Among them, in parallel with the decline of organized public transport systems in most African countries, commercial motorcycles have made a sudden appearance in sub-Saharan Africa. In the last few years, the motorcycle taxi has become a major means of transport in low-resource countries in Asia and Africa. As an example, this is also the case in rural villages situated in the Guinean–Sudanian zone in Senegal (Figure 1). To highlight this shift in Dielmo and N'Diop, in 2016, in nearly two villages in this geographic area with 700 inhabitants, we observed only eight cars, but 22 motorcycles, and all were bought in the last 3 years, most of them serving as motorcycle taxis. In fact, in Kenya from 2007 to 2014, the number of imported motorcycles rose from 16,000 to 500,000; more than a third were Chinese motorcycles, the cheapest costing only 500 USD. If more injuries linked to these motorcycles have already been observed by researchers, we also suggest that this sustainable trend implies that there is now probably no limit to the dissemination of certain infectious diseases including zoonoses currently considered as locoregional infections in Africa.

In addition to the means used by microorganisms for geographic dissemination, the evolution in the means used by microorganisms for dissemination merits observation. For some authors, mobile phones can be a vector for diverse viruses (including the metapneumovirus, respiratory syncytial virus, influenza viruses, rotavirus, and norovirus), as recently demonstrated by Pillet and others, who observed a viral RNA presence on 38.5% of health-care workers' mobile phones.4 A real and rapid leapfrogging has been seen in Africa, from a “no phone area” to a continent where mobile phones are widespread. It is estimated that approximately 97% of Africans will have a mobile phone by 2017, and approximately 1.144 billion mobile phones have already been imported in Africa. The paradigm shift is such that in many rural areas, inhabitants had a mobile phone before electricity arrived. This development will certainly change the epidemiology of infectious diseases. By extension from the results of Pillet and others, we can question the possible dissemination of other RNA viruses using this route, and inquire about its role during the recent Ebola outbreak.

The latest ongoing evolution, naturally a desirable one, consists of widespread electrification in Africa, which can sometimes hold surprises. The modification of the environment may sometimes cause unpredictable results. As an example, in Dielmo, a Senegalese malaria-endemic village, the recent arrival of electricity was concomitant with an increase in malarial cases; a controlled study demonstrated that the risk of malaria transmission was higher among individuals who had watched television outside the house.5 Since the arrival of electricity, investigators have observed that villagers gather in houses of those who have a television.

Disparate views about the usefulness of modeling have been described. Unlike explanatory models that are interesting although sometimes lacking parameters, we have drawn attention several times to the fact that infectious diseases are ecosystem diseases making them unpredictable.6–8 As expected by the “living croquet theory,” the future is unpredictable when living organisms are involved because of unpredictable human behaviors in addition with the multiple interferences between microorganisms.6,7 This has been particularly highlighted during H1N1 influenza, avian influenza, Severe Acute Respiratory Syndrome (SARS), or Middle East Respiratory Syndrome (MERS) coronavirus outbreaks.7,8 For us, observation remains the key to understanding infectious diseases. We believe that instead of wasting time predicting what we cannot predict, we must focus our efforts on real-time surveillance systems including alerting enabling a rapid and flexible response, as previously demonstrated for Clostridium difficile ribotype 027 infections.9 Finally, point-of-care laboratories, able to easily and quickly diagnose most emerging infections even in rural Africa,10 coupled with such surveillance systems, will allow us to confront these rapid and unpredictable changes in the future.