Country-level probability of reported fever for boys and girls.

Country-level probability of reported diarrhea for boys and girls.

Country-level probability of reported cough for boys and girls. 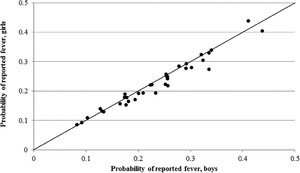 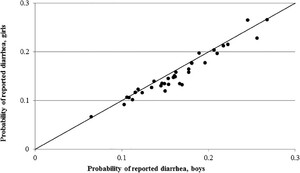 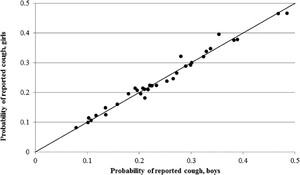 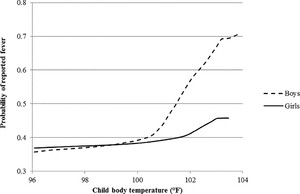 The overwhelming majority of evidence about the health of children in low- and middle-income countries is based on reports by parents. There is limited evidence on whether these reports suffer from systematic bias, particularly related to the gender of the child. We investigate differences in symptom reporting by child gender in a sample of countries in sub-Saharan Africa. Data from 35 Demographic and Health Surveys and 10 Malaria Indicator Surveys conducted since 2005 were analyzed. Parental reports of child symptoms were compared for girls and boys. In a subsample of data from Nigeria, we also compared the accuracy of parental reports of fever between girls and boys. Then, potential explanations for observed reporting differences were explored. Finally, country-level relationships between gender differences in symptom reporting and differences in child health outcomes were estimated. Parents reported fewer episodes of fever and diarrhea for girls as compared with boys. Less frequent symptom reporting for girls does not appear to be due to reduced exposure to illness-causing agents nor increased treatment seeking. Lower fever reporting for girls relative to boys is associated with higher relative infant mortality for girls at the country level, consistent with a potential link between underreporting and health outcomes. From a measurement perspective, estimates of gender imbalances in child morbidity and treatment based on parental reports may be inaccurate. From a public health perspective, parental underreporting of symptoms in girls may indicate untreated illness that goes unnoticed.