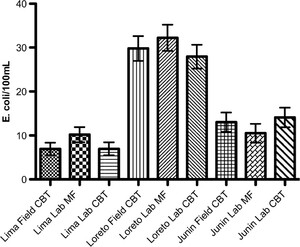 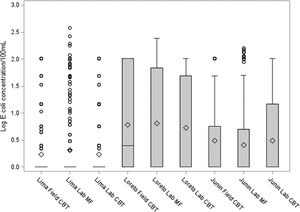 The Joint Monitoring Program relies on household surveys to classify access to improved water sources instead of measuring microbiological quality. The aim of this research was to pilot a novel test for Escherichia coli quantification of household drinking water in the 2011 Demographic and Health Survey (DHS) in Peru. In the Compartment Bag Test (CBT), a 100-mL water sample is supplemented with chromogenic medium to support the growth of E. coli, poured into a bag with compartments, and incubated. A color change indicates E. coli growth, and the concentration of E. coli/100 mL is estimated as a most probable number. Triplicate water samples from 704 households were collected; one sample was analyzed in the field using the CBT, another replicate sample using the CBT was analyzed by reference laboratories, and one sample using membrane filtration (MF) was analyzed by reference laboratories. There were no statistically significant differences in E. coli concentrations between the field and laboratory CBT results, or when compared with MF results. These results suggest that the CBT for E. coli is an effective method to quantify fecal bacteria in household drinking water. The CBT can be incorporated into DHS and other national household surveys as a direct measure of drinking water safety based on microbial quality to better document access to safe drinking water.