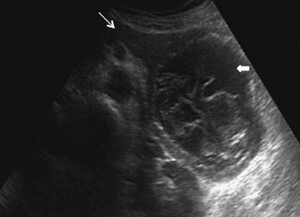 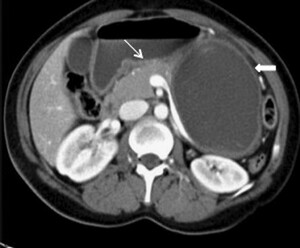 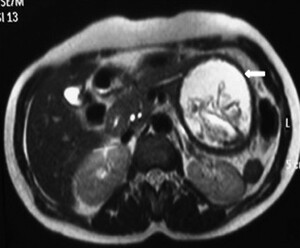 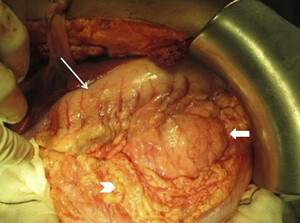 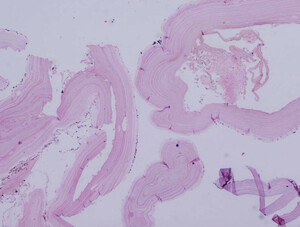 An ultrasound of the abdomen was performed which revealed an approximately 11 × 14-cm-sized well-defined cystic lesion with hyperechoic walls and internal echogenic floating serpentine structures arising from the tail of the pancreas (Figure 1).

Hydatid disease is caused by the larval stage of E. granulosus and remains a public health problem in cattle-raising countries which are endemic for the disease. Man is an accidental intermediate host and dog is a definitive host. The highest prevalence of hydatid disease in humans in India has been reported from south Indian states.2 The commonest site of involvement is the liver, seen in 59–75% cases. Pulmonary, renal, skeletal, and central nervous system hydatidosis is less common.3 Pancreatic hydatid disease is extremely rare and accounts for 0.25% of the cases.4 The closest differential diagnoses are mucinous cystadenoma and pseudocyst of the pancreas. The treatment of choice is surgical resection in the form of a distal pancreatectomy for lesions of the distal pancreas and a cystopericystectomy for the head lesions. Pre- and postoperative treatment with a 1-month course of albendazole and a 2-week course of praziquantel is recommended.1,5