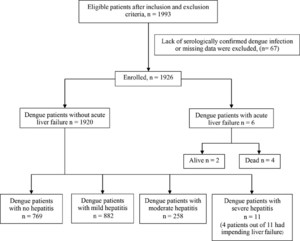 Incidence and Clinical Outcome of Acute Liver Failure Caused by Dengue in a Hospital for Tropical Diseases, Thailand

Dengue is an emerging disease and increasing health threat in tropical countries.1 The World Health Organization (WHO) estimates that more than 50 million cases of dengue and 20,000 dengue-related deaths occur annually worldwide. In 2010, approximately 96 million of the 390 million people infected with dengue virus were symptomatic.2 Dengue is classified into three groups according to the WHO 2009 classification: dengue without warning signs, dengue with warning signs, and severe dengue.3 Patients with dengue may develop dysfunction of multiple organs including the heart, muscle, kidney, liver, and brain. Acute liver failure secondary to dengue is rare but has a high mortality rate.4

Acute liver failure is defined as the rapid onset of acute encephalopathy and coagulopathy in a patient without preexisting cirrhosis and with < 26-week duration of illness.5,6 Severe hepatic involvement (acute liver failure) is a rare condition in patients with dengue, but commonly occurs during the second week of illness.3,7 Clinical and laboratory findings include a persistent fever, the appearance of jaundice, hepatomegaly, markedly elevated serum transaminase levels, persistent thrombocytopenia, an increased serum ammonia level, an increased prothrombin time (PT) of > 15 seconds, and an international normalized ratio (INR) of ≥ 1.5.8,9

The pathogenesis of acute liver failure in patients with dengue is controversial, but is thought to be caused by a direct cytopathic effect on liver cells or a dysregulated immune response to the virus.10 Hepatocytes and Kupffer cells are the main targets of the dengue virus. Cellular apoptosis of infected hepatocytes occurs both in vitro and in vivo via apoptosis-inducing ligand pathways. The histological changes associated with dengue occur in the liver parenchyma and are classically characterized by midzonal (zone 2) necrosis of the liver. Councilman bodies, which represent necrosis around viral particles, are also frequently observed in liver biopsy specimens.9

In a large prospective study in Vietnam, the incidence of acute liver failure in 644 patients with dengue was 0.77% during the 2-year study period.7 Moreover, the study revealed that underlying chronic hepatitis B or C infection can lead to more severe liver dysfunction in patients with dengue,7 although the results of some other studies are contradictory to this finding. Two small studies reported that concomitant hepatitis B or C infection had no effect on the severity of dengue.16,17

The present study was conducted to assess the incidence and clinical outcome of acute liver failure in patients with dengue and to identify parameters associated with acute liver failure secondary to dengue in the Hospital for Tropical Diseases in Bangkok, Thailand.

We performed a retrospective cohort study using the medical records of patients with serologically confirmed dengue who were admitted to the Hospital for Tropical Diseases in Bangkok, Thailand, from 2011 to 2015. An immunochromatographic rapid diagnostic test for dengue NS1 antigen and anti-dengue IgM (SD BIOLINE Dengue Duo; Standard Diagnostics, Kyonggi-do, Korea) was used to confirm the diagnosis of dengue. Patient information was deidentified and kept anonymous before data analysis.

We included all male and female patients ≥ 15 years of age who were admitted to the hospital inpatient unit with a diagnosis of dengue. We excluded patients who were concomitantly diagnosed with other causes of liver injury, such as chronic hepatitis B and C, acute hepatitis A and E, other tropical diseases such as malaria and leptospirosis, mushroom poisoning, drug-induced liver failure, pregnancy-induced liver failure, autoimmune hepatitis, or malignant infiltration of the liver.

Acute liver failure was defined as evidence of a coagulation abnormality, an INR of ≥ 1.5 in most cases, any degree of mental alteration (encephalopathy) in a patient without preexisting cirrhosis, and an illness duration of < 26 weeks.6,19

Impending liver failure was defined as liver dysfunction that did not meet the criteria for acute liver failure including nausea, vomiting, and laboratory investigations that showed increased serum bilirubin and/or liver enzymes, an increased PT and INR, and thrombocytopenia.18,20

The records of all patients were reviewed from the date of admission to the date of discharge. Each patient record was identified by the patient's hospital registration number. All diagnoses were recorded according to the International Classification of Diseases. After screening the patients against the inclusion and exclusion criteria, we further excluded all patients without evidence of serologically confirmed dengue (i.e., those without positive dengue NS1 antigen or positive dengue IgM antibody). We classified patients with dengue according to the severity of liver involvement.

Raw data were obtained from the case record forms. Data entry was then carried out using Microsoft Excel (Microsoft Corporation, Redmond, WA) and subsequently imported into and analyzed by SPSS version 18 (SPSS Inc., Chicago, IL). All data entry steps and analyses were checked for errors. Descriptive statistics are presented as incidence, mean with standard deviation, median with range, and 95% confidence interval (CI) with 25th–75th percentile or percentage. Categorical variables were tested for associations using either the χ2 test or Fisher's exact test. Student's t test, analysis of variance, or the Mann–Whitney test was used to compare differences between groups. Statistical testing was performed using two-tailed tests. A P value of < 0.05 was considered statistically significant.

All independent variables with or without transformed data were tested for a normal distribution. Qualitative variables such as sex and abdominal pain were recoded before performing the correlation analysis and multiple regression analysis. Multivariate analysis was performed among all variables in patients with dengue with moderate to severe liver involvement and analyzed by multiple regression.

This study was conducted with approval from the Hospital for Tropical Diseases, Bangkok, Thailand. The protocol was approved by the International Review Board of the Faculty of Tropical Medicine, Mahidol University, Thailand (MUTM 2015-061-01).

The mean age of the patients was 29.06 ± 12.48 years, and 49.8% were male. The demographic data and baseline clinical characteristics of the patients are shown in Table 1. Most of the patients with dengue-associated acute liver failure were < 40 years of age (66.66%) and male (83.33%). Moreover, among these patients, all cases of liver disease developed secondary to severe dengue hepatitis (100%). There were significant differences between the two groups in the presence of the severe stage of dengue, jaundice, abdominal pain, hepatomegaly, severe dengue hepatitis, days of fever at admission, and laboratory parameters (e.g., hemoglobin, hematocrit, alanine transaminase, and aspartate aminotransferase levels).

Demographic and baseline clinical characteristics of the study cohort

The baseline demographic data of the patients with dengue with no to mild liver involvement and those with moderate to severe liver involvement are shown in Table 3. There were significant differences in sex, the presence of the severe stage of dengue, hepatomegaly, jaundice, days of fever at admission, and laboratory parameters between the two groups.

To the best of our knowledge, no study has reported the duration of hospitalization of patients with dengue with liver involvement. In the present study, prolonged hospitalization (> 7 days) was associated with a high mortality rate (66.7%), even for patients under intensive care. Sedhain and others22 reported that a patient who developed acute liver failure (500-fold increase in liver enzyme levels) after dengue infection completely recovered despite the clinical presentation of the disease. Similarly, a case report from India documented complete recovery after acute liver failure following dengue infection.15 In contrast, four of our six patients died and only one patient slowly recovered after 1 month of hospitalization. Although one patient showed normal liver function after 18 days, the fever did not subside. This case was complicated by renal failure and the need for renal dialysis.

Parkash and others11 reported that severe hepatitis was considered a poor prognostic indicator for the development of acute liver failure in patients with dengue. In our study, however, severe hepatitis in patients with dengue was found to be a potential risk factor for the development of acute liver failure. Moreover, our patients developed elevated liver enzymes (60.3%), which supports previous data showing that abnormally high elevations in liver enzyme levels occur more often in young adults than in children with dengue and in at least two-thirds of adult patients with dengue.23 A study by Senaratne and others24 also demonstrated that elevated liver enzymes are associated with increased interleukin-2 levels and predict severe clinical outcomes of dengue disease.

Of all patients with dengue analyzed in the present study, 275 had moderate to severe liver involvement. These patients displayed clinical symptoms associated with a severe stage of the disease, including bleeding manifestations such as epistaxis or gingival bleeding, severe plasma leakage, and organ impairment.

Many clinical studies have investigated the use of a dengue vaccine to prevent and control dengue. The use of a purified inactivated virus vaccine is currently in the planning stage for clinical testing.25,26 A chimeric dengue vaccine was recently launched following a phase III clinical trial, and a recent study demonstrated the efficacy of that vaccine for symptomatic dengue in up to 65.6% of patients 9–16 years of age.27,28

Clinicians must be aware of the need for early monitoring of patients and measurement of appropriate laboratory parameters to obtain an accurate diagnosis of dengue and avoid misdiagnosis as viral hepatitis in dengue-endemic countries. Early diagnosis and regular monitoring can achieve good clinical outcomes. Therefore, it is important to promptly diagnose dengue and regularly monitor the affected patients' condition, bleeding, and laboratory-determined parameters such as complete blood count, serum transaminase levels, PT, and INR while ensuring good supportive care and management.