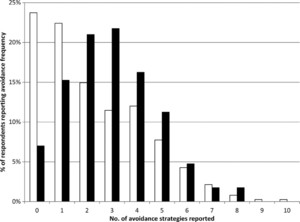 As the range of dengue virus (DENV) transmission expands, an understanding of community uptake of prevention and control strategies is needed both in geographic areas where the virus has recently been circulating and in areas with the potential for DENV introduction. Personal protective behaviors such as the use of mosquito repellent to limit human–vector contact and the reduction of vector density through elimination of oviposition sites are the primary control methods for Aedes aegypti, the main vector of DENV. Here, we examined personal mosquito control measures taken by individuals in Key West, FL, in 2012, which had experienced a recent outbreak of DENV, and Tucson, AZ, which has a high potential for introduction but has not yet experienced autochthonous transmission. In both cities, there was a positive association between the numbers of mosquitoes noticed outdoors and the overall number of avoidance behaviors, use of repellent, and removal of standing water. Increased awareness and perceived risk of DENV were associated with increases in one of the most effective household prevention behaviors, removal of standing water, but only in Key West.