Distributions of values of (A) alanine aminotransferase concentration (ALT) and (B) Karnofsky score, in patients without and with histoplasmosis. Distributions are shown for all patients (with or without tuberculosis). Dotted lines indicate thresholds used in the analyses of this study. 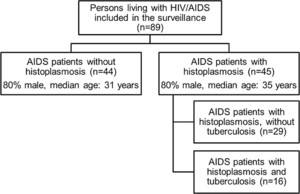 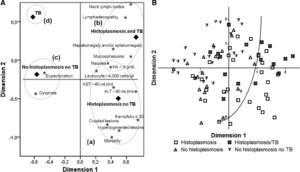 Histoplasmosis is common among persons living with human immunodeficiency virus/acquired immune deficiency syndrome (PLWHA) in Latin America, but its diagnosis is difficult and often nonspecific. We conducted prospective screening for histoplasmosis among PLWHA with signs or symptoms suggesting progressive disseminated histoplasmosis (PDH) and hospitalized in Hospital La María in Medellín, Colombia. The study's aim was to obtain a clinical and laboratory profile of PLWHA with PDH. During 3 years (May 2008 to August 2011), we identified 89 PLWHA hospitalized with symptoms suggestive of PDH, of whom 45 (51%) had histoplasmosis. We observed tuberculosis (TB) coinfection in a large proportion of patients with PDH (35%), so all analyses were performed adjusting for this coinfection and, alternatively, excluding histoplasmosis patients with TB. Results showed that the patients with PDH were more likely to have Karnofsky score ≤ 30 (prevalence ratio [PR] = 1.98, 95% confidence interval [CI] = 0.97–4.06), liver compromised with hepatomegaly and/or splenomegaly (PR = 1.77, CI = 1.03–3.06) and elevation in serum of alanine aminotransferase and aspartate aminotransferase to values > 40 mU/mL (PR = 2.06, CI = 1.09–3.88 and PR = 1.53, CI = 0.99–2.35, respectively). Using multiple correspondence analyses, we identified in patients with PDH a profile characterized by the presence of constitutional symptoms, namely weight loss and Karnofsky classification ≤ 30, gastrointestinal manifestations with alteration of liver enzymes and hepatosplenomegaly and/or splenomegaly, skin lesions, and hematological alterations. Study of the profiles is no substitute for laboratory diagnostics, but identifying clinical and laboratory indicators of PLWHA with PDH should allow development of strategies for reducing the time to diagnosis and thus mortality caused by Histoplasma capsulatum.