Epidemic curve of reported laboratory-positive chikungunya virus cases per 1,000 population by month of illness onset and island from January 2014 to February 2015. 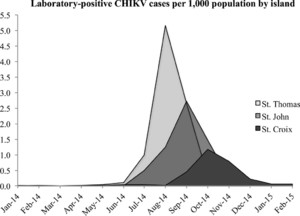 The First Reported Outbreak of Chikungunya in the U.S. Virgin Islands, 2014–2015

The chikungunya virus (CHIKV) epidemic in the Americas is of significant public health importance due to the lack of effective control and prevention strategies, severe disease morbidity among susceptible populations, and potential for persistent arthralgia and long-term impaired physical functionality. Using surveillance data of suspected CHIKV cases, we describe the first reported outbreak in the U.S. Virgin Islands. CHIKV incidence was highest among individuals aged 55–64 years (13.1 cases per 1,000 population) and lowest among individuals aged 0–14 years (1.8 cases per 1,000 population). Incidence was higher among women compared to men (6.6 and 5.0 cases per 1,000 population, respectively). More than half of reported laboratory-positive cases experienced fever lasting 2–7 days, chills/rigor, myalgia, anorexia, and headache. No clinical symptoms apart from the suspected case definition of fever ≥ 38°C and arthralgia were significantly associated with being a reported laboratory-positive case. These results contribute to our knowledge of demographic risk factors and clinical manifestations of CHIKV disease and may aid in mitigating future CHIKV outbreaks in the Caribbean.