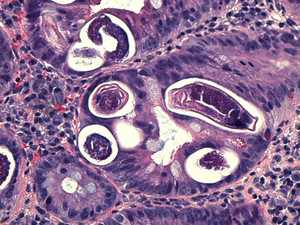 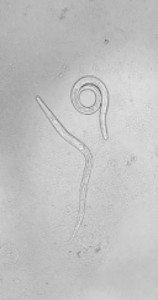 Strongyloides stercoralis is well known to cause hyperinfection syndrome during the period of immunosuppression; but dissemination, worsening hyperinfection, and development of multiorgan dysfunction syndrome after initiation of ivermectin has not been reported in the past. Herein, we describe the case of a 62-year-old man with chronic strongyloidiasis and human T-cell lymphotropic virus-1 coinfection, who developed significant clinical worsening after 24–48 hours of initiation of treatment with ivermectin (200 μg/kg daily). Oral albendazole (600 mg every 12 hours) was added to the regimen due to clinical deterioration. Notably, after a protracted clinical course with multiple complications, which included respiratory failure from gram-negative pneumonia and pulmonary alveolar hemorrhage, Klebsiella meningitis, Clostridium difficile colitis, and herpes labialis, the patient eventually recovered. Health-care providers should be aware that during the early days of antihelminthic treatment initiation, significant dissemination of S. stercoralis and worsening of the clinical scenario can occur.