Inclusion and exclusion of subjects for the ultrasonography (US) and urine microscopy (UM) examinations.

Composition of the participants tested positive by urine microscopy (UM+), ultrasonography by WHO criteria (US−WHO+) and echogenic snow sign (ES+). 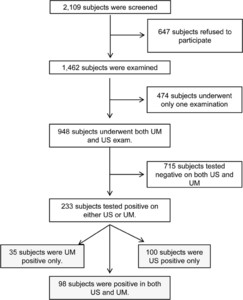 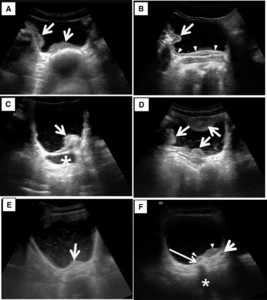 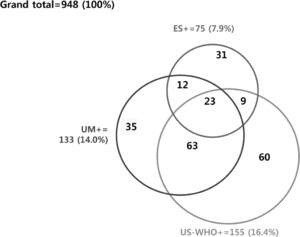 Urogenital schistosomiasis (UGS) is one of the important neglected tropical diseases, which requires global elimination programs. It is primarily diagnosed by urine microscopy (UM), but its sensitivity is not satisfactory. Ultrasonography (US) is an alternative screening method of UGS. The present study investigated the diagnostic feasibility of new criteria including echogenic snow sign, innumerable scattered small echogenic foci floating in bladder lumen, for UGS in White Nile State, Republic of Sudan, 2013–2014. A total of 1,462 participants were screened by US or UM, and 948 by both. The 948 subjects were 1–80 years of age, 485 (51.2%) of them were boys or men, and 648 (68.4%) were less than 15 years of age. Eggs were detected from 133 (14.0%) by UM. The US findings of bladder wall thickening, polypoid mass, and ureter dilatation were regarded as positive for UGS following the World Health Organization (WHO) guidelines. Of the 948 subjects, 155 (16.4%) were positive for US by the WHO criteria. The echogenic snow sign was detected in 75 participants, and was most frequently observed in age group of 10–14. It was more commonly observed in UM-positive participants (35/133; 26.3%) than in UM-negative participants (40/815; 4.9%), and the difference was statistically significant with an odds ratio of 6.92 (4.20–11.41). When the echogenic snow was added to the WHO criteria, 42 participants were additionally revealed to have UGS-related morbidity, reaching a total of 198 (20.9%) participants. The echogenic snow sign can be suggested as a new finding to the criteria of US for UGS.