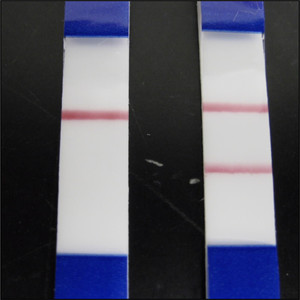 Search for other papers by William A. Petri Jr. in
Current site
Google Scholar
PubMedClose

A new rapid lateral flow fecal antigen detection test for Cryptosporidium was evaluated using diarrheal stool samples from a cohort of children in Bangladesh. The test had a sensitivity of 100% and a specificity of 94% when compared with enzyme-linked immunosorbent assay antigen detection.

Diarrheal diseases are a major cause of morbidity and mortality in the world.1,2 Cryptosporidium is an enteric protozoan parasite that is transmitted through the fecal-oral route, typically by consumption of contaminated food and water.3,4 The parasite has a low infectious dose resulting in diarrhea and abdominal pain.4,5 Cryptosporidium is a common cause of waterborne diarrheal disease worldwide, both in developing and developed countries as well as urban and rural areas; however, due to poor sanitation and urban crowding, Cryptosporidium infections are more prevalent in underdeveloped areas.1,4 Although infections do occur in immunocompetent hosts, immunocompromised hosts and children tend to have a more severe and prolonged disease course.4–6 There is need for a practical point-of-care diagnostic test that is rapid, reliable, and feasible for use in the field.

Cryptosporidium lateral flow (TechLab, Inc., Blacksburg, VA) is a newly developed immunochromatographic assay that qualitatively detects Cryptosporidium antigen in fecal specimens. It is a dipstick that uses a monoclonal antibody sandwich design to detect Cryptosporidium oocyst wall antigen. The assay flow begins with a diluted specimen that is drawn up via capillary action, the liquid fraction of which liberates membrane-embedded gold particles conjugated with anti-Cryptosporidium antigens. This mixture then flows to the visible reaction window where additional anti-Cryptosporidium antibodies are immobilized and capture antigen–gold complexes for a visual positive result.

Fecal samples were brought to room temperature and mixed thoroughly before beginning the test. Fifty microliters of specimen were transferred via pipette into the specimen dilution tube containing diluent (buffered protein solution). The sample end of a test strip was inserted into the specimen dilution tube. Results were read visually after 10 minutes. A sample was interpreted as positive if both test and control lines were present (Figure 1). The color of the lines ranged from dark red to light pink, recognizing that color intensity did not correlate with strength of positivity. A sample was interpreted as negative if only the control line was visible. The test was considered invalid if the control line was absent.