Overlap in test positivity for (A) maternal peripheral and (B) placental blood specimens. 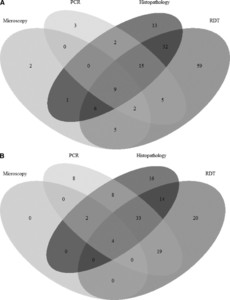 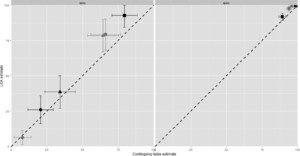 Placental malaria causes low birth weight and neonatal mortality in malaria-endemic areas. The diagnosis of placental malaria is important for program evaluation and clinical care, but is compromised by the suboptimal performance of current diagnostics. Using placental and peripheral blood specimens collected from delivering women in Malawi, we compared estimation of the operating characteristics of microscopy, rapid diagnostic test (RDT), polymerase chain reaction, and histopathology using both a traditional contingency table and a latent class analysis (LCA) approach. The prevalence of placental malaria by histopathology was 13.8%; concordance between tests was generally poor. Relative to histopathology, RDT sensitivity was 79.5% in peripheral and 66.2% in placental blood; using LCA, RDT sensitivities increased to 93.7% and 80.2%, respectively. Our results, if replicated in other cohorts, indicate that RDT testing of peripheral or placental blood may be suitable approaches to detect placental malaria for surveillance programs, including areas where intermittent preventive therapy in pregnancy is not used.

Antenatal Plasmodium falciparum infection can cause placental malaria, which causes low birth weight (LBW), stillbirths, premature births, and postnatal morbidity and mortality.1,2 Therefore, antenatal malaria prevention is an important component of malaria control programs in sub-Saharan Africa, and most countries recommend intermittent preventive therapy with antifolate antimalarials during pregnancy (IPTp) to prevent placental malaria and LBW. However, routine monitoring of the effectiveness of IPTp against LBW is challenging, owing to the multifactorial determinants of LBW and the barriers to routine detection of placental malaria.

The optimal approach to diagnose placental malaria remains unclear. Histopathologic analysis by trained personnel of fixed placental tissue is often considered as the reference standard,1 but its reliability can be undermined by multiple factors.3 Other approaches, using placental or peripheral blood, include parasite detection by traditional microscopy, rapid diagnostic tests (RDTs), or polymerase chain reaction (PCR) assays. Compared with histopathology, peripheral blood testing by microscopy4 or by RDT has been insensitive for placental malaria.5 Similarly, in placental specimens, the summary sensitivity of placental blood microscopy was 54% compared with placental histopathology in a large meta-analysis which identified only one study which compared RDT or PCR to histology4; in a subsequent report, results of a commercial RDT targeting the parasite histidine-rich protein 2 (HRP2) on peripheral blood at delivery had a sensitivity of only 81% compared with histopathology.6 Rapidly and reliably testing peripheral or placental blood for parasites would enable efficient surveillance for the efficacy of antenatal prevention strategies.

We used peripheral and placental specimens collected from delivering women in Malawi to compute the operating characteristics of microscopy, RDT, and PCR to detect placental malaria using both the classical contingency table and latent class analysis (LCA). Unlike the contingency table, LCA does not assume a gold standard, but constructs one based on the outcomes of the individual, imperfect tests.7 With this approach, we hypothesized that RDT would be comparable to PCR for the diagnosis of placental P. falciparum infection.

Specimens were collected from consecutive delivering women recruited between November 2009 and January 2011 at three sites near Blantyre, Malawi, where P. falciparum transmission is perennial and intense.8 At delivery, parasites were detected by microscopy, RDT, and PCR in maternal peripheral and placental blood; there was no formal quality assurance for parasite detection after initial training in each method. Thick blood smears were read on-site and the RDT used was First Response Malaria Ag. (Plasmodium lactate dehydrogenase [pLDH]/HRP2) Combo (Premier Medical Corp, Daman, India). PCR was performed on genomic DNA extracted by Chelex-100 (Bio-Rad, Hercules, CA) from dried blood spots in real-time PCR assays targeting the Plasmodium spp. 18s ribosomal RNA.9 Placental histology was analyzed by formalin fixing a 2 × 2 × 1 cm specimen from the maternal side of the placenta and staining with Gurr's modified Giemsa or hematoxylin and eosin; these were examined by a trained technician and scored on a standard 5-point scale for placental malaria.10

Estimated with active placental histopathology as the reference diagnostic standard.

We calculated the operating characteristics of peripheral or placental tests using traditional contingency tables by setting histopathologic evidence of active infection as the reference standard for each analysis (Table 1). In peripheral blood specimens, specificities of each test exceeded 89%, but sensitivities were below 80%. In placental specimens, specificities of microscopy, RDT, and PCR each exceeded 93%, but sensitivities were low, even for RDT (66.2%) and PCR (64.4%), which are typically considered to have a low limit of detection. The sensitivity of microscopy, compared with histopathology, was very poor (7.3%), underscoring the unreliability of this approach, even in research settings. Furthermore, based upon our contingency tables, neither RDT nor PCR performed on peripheral or placental blood appear tohave adequate sensitivity to diagnose histopathologically proven placental malaria.

We next assumed that each test (including histopathology) was imperfect, and performed LCA to construct an “alloyed” reference standard against which to reestimate operating characteristics (Table 1). Notably, despite its consideration as reference standard, the LCA-computed sensitivities of histopathology were low in models of both peripheral (77.8%) and placental (69.4%) specimens. Using LCA, sensitivities remained poor for microscopy of either peripheral (26%) or placental blood (6.4%), and PCR sensitivity was poor in peripheral blood (38.6%) and moderate in placental blood (78.5%). However, RDT sensitivity was increased by LCA estimation in both peripheral (79.5–92.7%) and placental (66.2–79.3%) specimens, with increased estimates of specificity (compared with contingency estimation) in both peripheral (89.3–91.8%) and placental (94–97.6%) specimens. Overall, compared with traditional contingency analysis, LCA estimated higher sensitivities and specificities of each of the component tests (Figure 2).

Our LCA approach to placental malaria diagnostics suggests that active, histologically evident placental malaria can be routinely diagnosed by RDT or PCR testing of placental blood specimens or RDT testing of peripheral blood. In our analysis, the LCA-estimated sensitivities for each exceeded that for histopathology, and each is less operator dependent than histopathology. If our findings are replicated in other studies, the minimal resources and training needed for RDT use and rapid turnaround (compared with PCR), would make RDT of maternal peripheral or placental blood an efficient and reliable diagnostic test for active placental malaria.

Our results also underscore the suboptimal performance of current individual approaches to diagnose placental malaria. Although often considered the gold standard strategy, the sensitivity of histopathologic analysis was only 76% when estimated by LCA. Similarly, in a prior study in Malawi which used Bayesian LCA models to assess the operating characteristics of microscopy, PCR, and histopathology, the LCA-estimated sensitivity of histopathology was only 50%.14 Because of this, future studies of placental malaria prevention should incorporate multiple approaches to diagnosis and test alternate approaches, including enhanced immunohistochemistry,15,16 large-volume specimen preparation for PCR,17 or novel nucleic acid detection assays.18

Our study suggests that peripheral or placental blood RDT testing at delivery can be useful tools for the routine diagnosis of placental malaria for surveillance. Our results also illustrate the potential value of LCA estimation of the operating characteristics of diagnostic tests when, as in placental malaria, individual diagnostic approaches are each imperfect. RDTs are increasingly available throughout malaria-endemic Africa19; if our findings are replicated in other settings, this could enable the surveillance of placental malaria by the routine use of RDTs on delivering women, and thereby provide a tool to evaluate measures to prevent the morbidity of malaria in pregnancy.