Malaria prevalence in 18 counties at the China–Myanmar border, 2005–2014. The columns of different colors show the change trend of total cases in 18 counties (black), total cases of China (gray). The black dash line indicated the malaria incidence of 18 border counties. 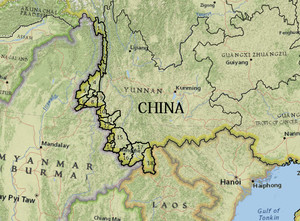 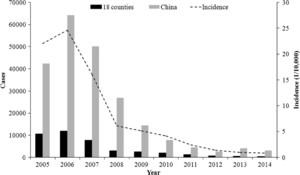 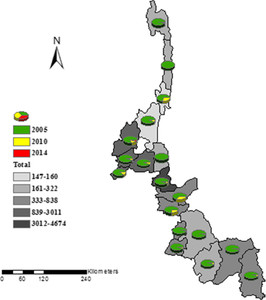 Towards Malaria Elimination: Monitoring and Evaluation of the “1-3-7” Approach at the China–Myanmar Border

The surveillance and response system remains one of the biggest challenges to malaria elimination along the China–Myanmar border. In China, “1-3-7” approach was developed to guide elimination activities according to the National Malaria Elimination Program, which is a simplified set of targets that delineates responsibilities and actions. The time frame of the approach has been incorporated into the nationwide web-based disease reporting system: 1, case reporting within 1 day after diagnosis; 3, case investigation within 3 days; and 7, focus investigation and action within 7 days. Herein, the data on malaria cases in 2005–2014 and after the “1-3-7” implementation in 2013–2014 of the 18 counties at the China–Myanmar border are reviewed and analyzed. Results showed that the total cases decreased while the proportion of imported cases rose. The “1-3-7” was well executed, except for the “3” indicator, which was 96.3% accomplished on average in the 18 border counties, but needs to be further strengthened. More efforts are highlighted for timely and accurate case detection as well as proactive mapping of disease transmission hot spots to facilitate the elimination of border malaria.