Lesion at presentation and at follow-up 1 year later. 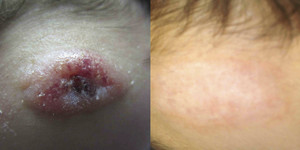 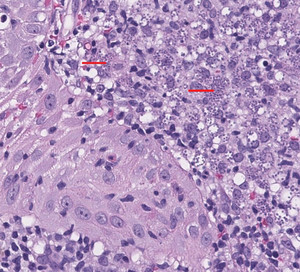 It is challenging to find safe, nonscarring and noninvasive treatment of facial cutaneous leishmaniasis (CL) in children. Herein, we report a child with CL from a region endemic for Leishmania tropica, whose lesion persisted after treatment with oral fluconazole but responded to topical paromomycin. Paromomycin should be considered early for treatment of Old World CL and is a well-tolerated and effective mode of therapy for facial lesions.

A 3.5-year-old boy presented to the infectious diseases outpatient clinic at the Hospital for Sick Children, Toronto, with a 4-month history of a progressive, exophytic plaque on his forehead. He was otherwise well with no fever or systemic symptoms. He had emigrated 7 months earlier from Kandahar, Afghanistan, to Ontario, Canada. No other family member had similar lesions at the time. Before presentation to our clinic, he was seen in multiple walk-in clinics where no definitive diagnosis had been made. Various topical therapies including fusidic acid and ketoconazole were used without improvement. Upon referral to a dermatologist, a skin biopsy was performed, which showed a dense diffuse infiltrate in the dermis, numerous histiocytes with abundant pale staining cytoplasm, and innumerable organisms exhibiting paranucleus that had a positive Giemsa stain consistent with leishmaniasis. The child was subsequently referred to our outpatient clinic. Upon further history, it was determined that his father was treated for cutaneous leishmaniasis (CL) when he was 8 years of age with injections, possibly pentavalent antimonial therapy.

At presentation, he had a 2.6 × 1.5 cm pinkish brown infiltrative plaque with central eschar on his forehead (Figure 1). There was no discharge or fluctuation. His physical examination was otherwise unremarkable. His complete blood count, liver function tests, and immunoglobulin levels were normal. In view of the pathological diagnosis of CL (Figure 2), he was started on oral fluconazole 7 mg/kg (100 mg) daily.

At the end of 8 weeks of therapy, there was minimal change in the lesion, and fluconazole therapy was stopped and the child was observed. Within a month of discontinuation of the therapy, the lesion expanded to 3 × 2 cm with surrounding yellow crusting. In view of the nonresponse to fluconazole, he was started on topical paramomycin applied twice daily for 20 days. The treatment response was excellent and the area completely healed by 3 months. Figure 1 shows the residual dyspigmentation, with no evidence of recurrence, at follow-up 1 year later.

Leishmaniasis is listed among the World Health Organization's 17 neglected tropical diseases.1 Leishmaniasis can present in three major forms—the cutaneous form (CL), which is the most common, the visceral form, and the mucocutaneous form. CL usually presents with well-demarcated ulcerative plaques on exposed sites, which cause significant disfigurement. Leishmaniasis is caused by the bite of the female sandfly, Phlebotomus species, in the Old World and Lutzomyia species in the New World. There are 0.7–1.2 million new cases of CL worldwide each year.1 Old World CL is seen in parts of north Africa and Asia, whereas the New World CL (which includes the mucocutaneous type) occurs in South America.

Leishmania tropica is the predominant species causing CL in Afghanistan, especially in Kandahar in south Afghanistan—our patient's original residence.1,2 Unfortunately, the patient's pathology paraffin block could not be retrieved to confirm the species in this case.

Historically, parenteral and intralesional antimonial compounds were used to treat CL. In view of its invasiveness, serious side effects including cardiac arrhythmias,3 poor compliance, and increasing drug resistance, systemic therapy is not popular. Intralesional therapy on the face requires multiple infiltrations, is painful,4 often associated with scarring, and requires substantial technical expertise.2

Although there are no clinical trials in children with CL treated with fluconazole, there are reports of good response to treatment of 6–12 weeks,5–8 and so, our patient was initially treated with oral fluconazole. In adolescents and adults, there are trials which have shown that fluconazole is effective in 80% of Old World CL lesions,9 and 400 mg a day is better than 200 mg (81% versus 48% complete healing at 6 weeks).10

When it was clear that the lesion was not responding to fluconazole, further treatment of an Old World CL facial lesion which was easy to administer, painless, nontraumatic, without major side effects, and with evidence in children was a challenge. Other potential therapeutic options include intralesional stibogluconate, cryotherapy, photodynamic therapy, systemic amphotericin, and sodium stibogluconate. Short-course amphotericin is often effective11; however, it requires the administration of an intravenous medication with significant risk for adverse effects including nephrotoxicity.3

Paramomycin has recently been shown to be an effective topical treatment of CL in adults.12 Although we could not find any published trials recommending paramomycin for L. tropica CL in children, literature reports 80% response to paramomycin for Leishmania major CL in studies which included children.12 Neal and others found that in mouse models, aminosidine (chemically identical to paromomycin) showed high activity against amastigotes of all strains of L. major and L. tropica.13 A meta-analysis found an advantage of using paromomycin with methylbenzethonium chloride over placebo in Old World CL.14

On the basis of this knowledge, we opted to use topical paromomycin for this child. The treatment was well tolerated, with complete resolution and no relapse at 1 year.

Our article adds to the growing body of literature that topical paromomycin is an effective and safe mode of therapy for Old World CL in children, especially after treatment failure with fluconazole. Its efficacy in a child with likely L. tropica CL opens up another therapeutic option for children infected with this species. It is especially useful in lesions such as those on the face where other forms of treatment may be invasive and/or have a significant risk profile.