Map of Hainan Island and distribution of the 30 sequence types (STs). Map obtained from http://www.hinews.cn/news/system/2009/11/10/010605499.shtml showing the major regions in the island. The STs of 60 clinical isolates were labeled in each region in which melioidosis patients come from. The number of the strains is shown in the brackets. 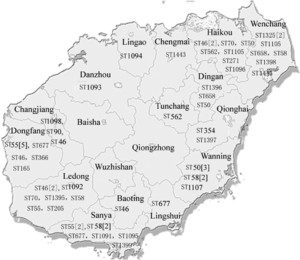 Burkholderia pseudomallei is a gram-negative bacterium that causes melioidosis. In this study, we examined the sequence types (STs) of 60 clinical isolates from patients with melioidosis in Hainan, a tropical island in southern China. The 60 clinical isolates were resolved into 30 STs. Among the STs, ST562 was also reported in Australia, and ST90 was also reported in the United States, probably from a traveler who had previously visited Asia. In addition, six novel STs were found in this study, including ST1395, ST1396, ST1397, ST1398, ST1399, and ST1443, whereas the remaining STs were mostly shared with other southeast Asian regions. Phylogenetic analysis of 60 isolates conducted using the eBURST v3 software segregated the 30 STs into three groups and 18 singletons. Our study shows genetic diversity of 60 clinical isolates of B. pseudomallei in Hainan Island.