Eschar: a clinical photograph showing an erythematous papule on the right armpit. The scab might have been peeled away.

(A) On admission day: bilateral pulmonary infiltration. (B) On hospital day (HD) 2: acute respiratory distress syndrome. (C) On HD 10: improving state. (D) On HD 23: almost recovered by chest radiography. She has been discharged. 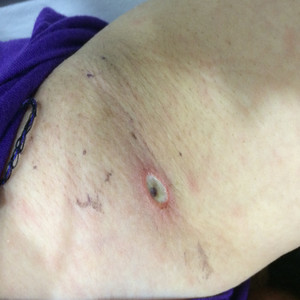 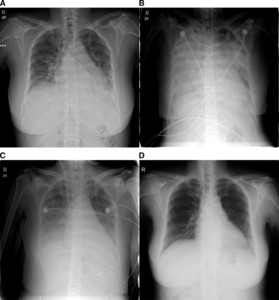 A 67-year-old woman was diagnosed as having scrub typhus with pneumonitis. On admission, she was started on a combination therapy with levofloxacin and doxycycline. However, the patient developed severe acute respiratory distress syndrome (ARDS) on the 2nd day, and as a result, she underwent extracorporeal membrane oxygenation (ECMO). She was weaned from ECMO on the 10th day, as her respiratory status gradually improved. She was discharged without sequelae on the 23rd day. The outcome suggests that the use of ECMO should be considered for patients with ARDS induced from scrub typhus.

Scrub typhus, also known as a tsutsugamushi disease, is an acute lethal infectious disease caused by Orientia tsutsugamushi. It is an endemic to a 13,000,000 km2 area of the Asia-Pacific rim, extending from Afghanistan to China, Korea, the islands of the southwestern Pacific, and northern Australia.1 A billion people are at risk, and nearly a million cases are reported each year.2

Scrub typhus is one of the differential diagnosis for fever with thrombocytopenia or hemorrhage.3 Scrub typhus can manifest with either nonspecific febrile illness or constitutional symptoms (fever, rash, myalgia, and headache), or with organ dysfunction, such as the kidney (acute kidney injury), lung (pneumonia), heart (myocarditis), liver (hepatitis), and central nervous system (meningitis).4–10 Although most patients rapidly improve with appropriate antibiotic therapy, a small percentage of cases experience serious complications.3

Acute respiratory distress syndrome (ARDS) is a serious complication of scrub typhus that occurs when fluid leaks into the alveoli as a result of sepsis. The incidence of ARDS in the general adult population was reported to be 15.3 of 100,000 in Northeast Ohio in 2002.11 The incidence of ARDS in subjects with scrub typhus is much higher than that in general adult population.7,12 Approximately 1–15% of scrub typhus patients also had ARDS.7,13,14

Extracorporeal membrane oxygenation (ECMO) is a therapeutic tool for providing life support to patients with the inability for the lungs or hearts to maintain sufficient oxygenation in the body. ECMO involves placing patients on a vascular circuit with a membrane oxygenator that temporarily takes over the gas exchange function of the lungs. There have been an increasing number of clinical reports documenting the use of ECMO in severe ARDS patients who failed to respond to conventional mechanical ventilation therapy.15 Herein, we describe a case of scrub typhus complicated by ARDS that was successfully managed with ECMO.

A 67-year-old woman was admitted with fever and maculopapular rash on the whole body. She had been a healthy woman without any specific medical history. Three weeks before admission, she had been to a farm and harvested persimmons from a tree in a rural part of Chungcheongnam-do. Thereafter, 4 days before coming to our hospital, she was admitted to a nearby hospital exhibiting signs of fever and skin rash. Paracetamol was given for fever control without much improvement; and when she manifested low blood pressure, she visited our emergency department.

On HD 2, even with hyperbaric oxygen therapy, oxygen saturation was not maintained (dropped by 50%) and lead to the development of ARDS (Figure 2B); thereafter, she was mechanically ventilated. Despite high ventilator support (fraction of inspired oxygen [FiO2], 1.0), oxygen saturation was only 83%. She was changed to a prone position after 3 hours. A follow-up ABGA revealed an exacerbated pulmonary status: pH, 7.20; PaCO2, 45.0 mmHg; PaO2, 53.0 mmHg; HCO3−, 17.6 mmol/L; and oxygen saturation, 78%. The patient was on a continuous mandatory ventilation mode with a tidal volume of 320 mL, respiratory rate of 24/minute, FiO2 of 1.0, and positive end-expiratory pressure of 15 cm H2O (PaO2/FiO2 ratio = 53). Other laboratory results were normal, and urine output was maintained. To deliver sufficient oxygen and to avoid pulmonary oxygen toxicity, veno-venous ECMO was instituted. As a drop of blood pressure was shown after ECMO, a low level of inotropics (norepinephrine, up to 10 μg/minute) was used, which was then tapered out. Fortunately, there was no other organ damage. During the 9th day of ECMO, no complications related to extracorporeal circulation occurred. Throughout the 7th days post initiation of ECMO, radiographic abnormalities and arterial oxygenation progressively improved (Figure 2C). On HD 10, ECMO was discontinued. The ventilator was also weaned off and extubation was done 3 days after the discontinuation of ECMO (on HD 13). She was discharged without sequelae after a total of 23 days in the hospital (Figure 2D).

Scrub typhus is a zoonosis caused by O. tsutsugamushi. The reservoirs for infection are the chigger (larva of trombiculid mite) and humans are accidentally infected. It is transmitted by trombiculid mites in long grasses and in dirt-floor homes.

Orientia tsutsugamushi is an obligate intracellular gram-negative bacterium that proliferates within the endothelial cells of small vessels in humans. Systemic vasculitis and perivasculitis are the hallmarks of scrub typhus, which cause increased vascular permeability and hypoperfusion in the tissue.16–19 Scrub typhus manifests as either nonspecific febrile illness or multi-organ dysfunction, such as acute kidney injury, ARDS, myocarditis, hepatitis, and meningoencephalitis.4–10 The involvement of lungs has been described to range from bronchitis and interstitial pneumonitis to ARDS.6,20,21

ARDS is characterized by diffuse pulmonary infiltrates in the X-ray appearance and pathologically by diffuse alveolar damage caused by an insult to the pulmonary capillary endothelium and the alveolar epithelium.22 ARDS is one of the serious complications of scrub typhus, which is associated with high morbidity and mortality.7 Although the pathogenesis of ARDS in scrub typhus is not yet well established, the increase of cytokine due to immunologic response can be suggested.23 Moreover, there has been a reported case where O. tsutsugamushi was cultured from bronchoalveolar lavage.24 With appropriate antibiotics, like doxycycline, serious complications such as ARDS or disseminated intravascular coagulation are rarely seen.25,26 In this case, as our patient did not have any specific medical history, there were no multi-organ failures, except the lung. Despite the administration of doxycycline, 4 days after the onset of fever, ARDS has occurred. The reason is not clear. However, we can consider the following reasons. There is a possibility that a coinfection from another pathogen that we did not detect may have induced ARDS. Another reason less likely could be the infection by doxycycline-resistant strain reported in northern Thailand but there have not been cases reported in Korea.27 The patient in this case had also shown response to doxycycline finally.

In a retrospective study, it was reported that 1.7% of scrub typhus patient had ARDS, and the mortality rate of ARDS was up to 36%.14 As in our case, in spite of the prompt use of antibiotics, the occurrence of ARDS may be inevitable, which can even be fatal. Thus, to improve the prognosis of ARDS, appropriate treatments to sustain an appropriate level of oxygen are important; and ECMO can take such role. In this case, ECMO was a useful bridge for the conventional ventilator therapy. The quick decision to use ECMO was key to shorten the delay of oxygenation.

However, one of the factors to be considered in such a case is the pharmacokinetics of the medications administered. ECMO involves massive influx and efflux of fluids via catheters, which consequently alter the volumes of distribution, elimination of half-lives, and protein bindings of drugs. Furthermore, the inflammatory activation induced by the extracorporeal circulation and exposure of blood to foreign material and the drug sequestration in the circuit both contribute to alteration in antibiotic concentration and half-life. For these reasons, dose requirements may change if ECMO is being instituted. Since patients receiving ECMO commonly face severe infections, correct dosing is of paramount importance to improve survival. Although there are no studies regarding doxycycline and levofloxacin yet, efforts to find the appropriate dose are in progress. Therapeutic drug monitoring (whenever available) or population pharmacokinetics, based on readily available clinical and laboratory data, should help tailor antibiotic dosing to the individual patient.