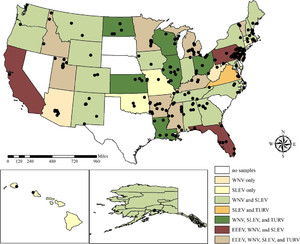 Wild birds serve as amplifying hosts for many arboviruses, and are thought to be responsible for introducing these viruses into new areas during migration as well as reintroducing them to places where winter temperatures disrupt mosquito-borne transmission. To learn more about four mosquito-borne arboviruses of concern to human or animal health, we tested sera from 997 wild birds of 54 species and 17 families across 44 states of the United States collected from January 1, 2013, through September 30, 2013. Samples were tested for antibody against eastern equine encephalitis, St. Louis encephalitis, West Nile, and Turlock viruses using plaque reduction neutralization tests with an endpoint of 80% or greater. Of the 333 (33.4%) birds that tested positive for antibody to at least one arbovirus, 29.7% were exposed to two or more arboviruses. Exposure to all four arboviruses was detected in Canada geese, double-crested cormorants, mallards, mute swans, laughing gulls, and American coots. Our results suggest that exposure to arboviruses is widespread in the United States across a diversity of wild bird species.