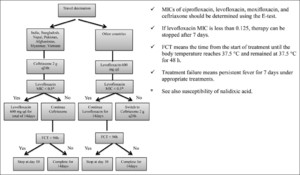 Case Series of Imported Enteric Fever at a Referral Center in Tokyo, Japan: Antibiotic Susceptibility and Risk Factors for Relapse

Owing to the increase in Salmonella strains with decreased fluoroquinolone susceptibility in the endemic areas, we have been treating enteric fever with intravenous ceftriaxone empirically since 2007. In this study, we reevaluated our treatment protocol. This retrospective cohort study was conducted at a single institute in Tokyo, Japan, between January 2006 and December 2013. Enteric fever was defined as isolation of Salmonella Typhi or Salmonella Paratyphi A, B, and C from the blood and/or stool of patients with fever. Of the 35 patients with imported enteric fever, 28 (80%) had returned from south Asia. Ciprofloxacin-susceptible strains were detected in only 12% of the cases. The isolates showed excellent susceptibility to ampicillin (91%), chloramphenicol (94%), ceftriaxone (97%), and azithromycin (97%). One case of Salmonella Paratyphi B was excluded, and of the remaining 34 patients, 56% were treated with ceftriaxone alone, 26% with ceftriaxone then fluoroquinolone, and 9% with levofloxacin alone. The overall relapse rate was 6.1%; however, among those receiving ceftriaxone monotherapy, the relapse rate was 11% (N = 2). The relapse group was characterized by longer times to treatment initiation (P = 0.035) and defervescence (> 7 days) after treatment initiation (P = 0.022). In such cases, we recommend that ceftriaxone treatment be continued for > 4 days after defervescence or be changed to fluoroquinolone if the strains are found to be susceptible to prevent relapse. Furthermore, ampicillin and chloramphenicol, which are no longer prescribed, may be reconsidered as treatment options in Asia.