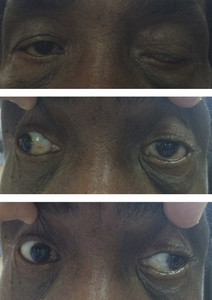 We report the case of a 62-year-old patient who developed an acute painless isolated left third cranial nerve palsy sparing the pupil in the setting of an acute chikungunya infection. The patient had no significant medical history. Specifically, he had no vascular risk factors. Ocular involvement in chikungunya fever is uncommon. The potential virus- and infection-related mechanisms of this third cranial nerve palsy are discussed.

The chikungunya virus is an arthropod-borne virus that recently spread out of its usual endemic area with an outbreak in the West Indies and Latin America. More than 706,093 cases were reported between December 2013 and November 2014, including 9,803 cases with serologic confirmation.1 In the French Caribbean island of Martinique, 70,860 suspected cases were documented during this same period. Herein, we report the case of a male patient with serology-confirmed chikungunya virus infection, who developed unilateral isolated third cranial nerve palsy during the acute phase of the disease.

A 62-year-old African–Caribbean man with a history of chronic open-angle glaucoma presented to Martinique University Hospital, Martinique, France, in April 2014 for sudden occurrence of horizontal binocular diplopia and left droopy eyelid. Two days before the onset of his diplopia, he developed acute fever (39°C), headaches, and polyarthralgia (both wrists and ankles) and was clinically diagnosed with a chikungunya virus infection in the setting of an epidemic outbreak.

The patient denied any eye pain. His blood pressure was 137/78. Best-corrected visual acuity was 20/20 in both eyes for distance and was normal at near. Pupils were equal and reactive to light and accommodation. There was no relative afferent pupillary defect. There was a left upper eyelid ptosis. Ocular motility examination showed restricted upgaze, adduction, and downgaze in the left eye (Figure 1). Slit-lamp examination was unremarkable. Funduscopic examination showed normal retina and vessels and bilateral optic nerve head cupping going along with the history of chronic glaucoma. Automated visual fields were full in both eyes. Aside from his fever and joint pain, full review of systems was unremarkable. Specifically, there was no diabetes, and a recent lipid panel was unremarkable. A magnetic resonance imaging (MRI) of the brain and orbits with and without contrast did not show any lesion on the left third cranial nerve pathway or any sign of stroke. A magnetic resonance angiogram (MRA) of the brain ruled out an aneurysmal compression of the left third cranial nerve. Erythrocyte sedimentation rate and C-reactive protein were within normal limits.

Chikungunya virus serology was obtained 9 days after the onset of the symptoms (immunochromatographic enzyme-linked immunosorbent assay) and was highly positive, with both IgM and IgG titers of more than 20 (N < 3 in arbitrary unit).

Classic etiologies of isolated third cranial nerve palsy including syphilis, human immunodeficiency virus, sarcoidosis, Lyme disease, diabetes, intracranial tumors, and intracranial hematoma were excluded by ancillary exams and imaging. Serum glycated hemoglobin level was 6.5%. The patient was started on aspirin. Fever resolved within 2 days and joint pain persisted 4 months. At 1-month follow-up, the ptosis had slightly improved, but the left eye movements were still significantly impaired. Treatment was symptomatic and included a tape over the left lens of his glasses to suppress the diplopia in primary gaze and keep a good peripheral visual field.

At 6-month follow-up, his diplopia had dramatically improved. There was no limitation in left eye movements, and the left upper eyelid ptosis had resolved.

We report the case of a patient with an acute painless isolated left third cranial nerve palsy sparing the pupil in the setting of an acute chikungunya infection. No other neurological dysfunctions that might have aided in localization of the lesion were present.

In aneurysmal compressions of the third cranial nerve the pupil is usually involved, which was not the case in our patient.2 However, an emergency MRA was performed to rule out this life-threatening condition. In contrast to a posterior communicant artery aneurysm, which can become suddenly more prominent and eventually rupture, compressive cranial nerve palsies are more likely to develop in a progressive manner.3 Furthermore, they would not improve by themselves, and the brain MRI would have revealed the lesion. When computed tomography brain imaging does not show any compressive lesion on the third cranial nerve pathway and the clinical suspicion for compression is high, an infiltration of the nerve should be considered and an MRI should be obtained. Again, third cranial nerve palsies secondary to such mechanism would not improve over time.4

The patient was of African–Caribbean descent; temporal arteries on both sides were pulsatile, non-tender, and normal in appearance. Fluorescein angiogram did not show choroidal ischemia, and no severe decreased vision occurred over time in the absence of steroid treatment, which ruled against giant cell arteritis. Furthermore, inflammatory blood markers were negative.5

No lumbar puncture for cerebrospinal fluid analysis was performed because the clinical presentation of our patient did not require it and, therefore, no measurement of the intracranial pressure was obtained. Indeed, he did not present any signs or symptoms consistent with an acute meningeal process. However, encephalitis in the setting of chikungunya virus has been reported, and we cannot rule out that an elevation of the intracranial pressure related to subtle encephalitis could have led to an isolated ocular motor palsy in our case.6 Although sixth cranial nerves are classically involved in the setting of elevated intracranial pressure, patients can also develop isolated third cranial nerve palsies.7

Finally, the good outcome with complete recovery of the palsy within a 6-month period strongly suggests a microvascular ischemic etiology.3 Diabetes and high blood pressure are the most common causes of microvascular isolated ocular motor nerve palsies, but our patient did not present any of these conditions.

Both IgM and IgG titers were of more than 20 (N < 3), excluding the possibility of false-negative immunochromatographic chikungunya virus IgM test. Of note, IgM level can be high for a long period after the onset of the infection.1 In an endemic area, the diagnosis of acute chikungunya infection could have been challenged by these results, but the fact that our patient did not travel to any of these areas and the context of the local epidemic outbreak leave very little doubt regarding the diagnosis.

Ocular involvement in chikungunya fever is uncommon. A previous report from an epidemic outbreak in India identified the following ocular manifestations associated with chikungunya virus infection: anterior uveitis, optic neuritis, and dendritic keratitis.8 In this study, three patients were found to develop a sixth nerve palsy associated with lagophthalmos. Although the authors do not discuss this finding, they mention that other cranial nerve palsies were ruled out by neurologic examination. Thus, we can assume that this is the result of a brainstem lesion at the level of the loop of the seventh cranial nerve around the nucleus of the sixth cranial nerve. To our knowledge, there is no other report of a third cranial nerve palsy in the setting of a chikungunya infection.

We acknowledge that chikungunya-related third cranial nerve palsy is a diagnosis of exclusion, since no evidence can be established. But, we strongly support this diagnosis. Indeed, the onset of the palsy occurred during the acute phase of a serology-proven infection with the chikungunya virus, which is known to be a neurotropic virus. Gene profiling studies have shown that chikungunya alphavirus infection induces an upregulation of several pro-inflammatory molecules, cytokines, and chemokines that would have direct and indirect neurotoxic effects. Immunohistochemistry techniques revealed that neurons were infected and induced to programmed cell death.9

It is unclear whether the virus is directly responsible for this acute ischemia or whether it induced transient elevation of the blood pressure or metabolic changes that caused ischemia. An elevation of the intracranial pressure is also to be considered as discussed above. Either way, the palsy resolved spontaneously, as did the chikungunya fever symptoms, within a few months. We, therefore, think that chikungunya infection should be added to the etiologies of infectious third cranial nerve palsies.