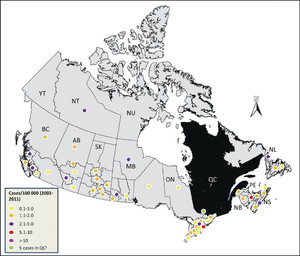 Toxoplasmosis and Toxocariasis: An Assessment of Human Immunodeficiency Virus Comorbidity and Health-Care Costs in Canada

Toxoplasma gondii and Toxocara spp. are zoonotic parasites with potentially severe long-term consequences for those infected. We estimated incidence and investigated distribution, risk factors, and costs associated with these parasites by examining hospital discharge abstracts submitted to the Canadian Institute for Health Information (2002–2011). Annual incidence of serious toxoplasmosis and toxocariasis was 0.257 (95% confidence interval [CI]: 0.254–0.260) and 0.010 (95% CI: 0.007–0.014) cases per 100,000 persons, respectively. Median annual health-care costs per serious case of congenital, adult-acquired, and human immunodeficiency virus (HIV)–associated toxoplasmosis were $1,971, $763, and $5,744, respectively, with an overall cost of C$1,686,860 annually (2015 Canadian dollars). However, the total economic burden of toxoplasmosis is likely much higher than these direct health-care cost estimates. HIV was reported as a comorbidity in 40% of toxoplasmosis cases and accounted for over half of direct health-care costs associated with clinical toxoplasmosis. A One Health approach, integrating physician and veterinary input, is recommended for increasing public awareness and decreasing the economic burden of these preventable zoonoses.