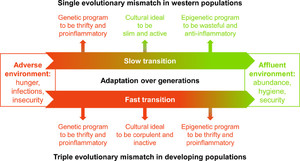 The rapid rise in noncommunicable diseases in developing populations is explained by their rapid transition from adverse to affluent environments. Public health organizations, supported by global collaborative efforts like the Millennium Development Goals, have made remarkable progress in restricting poverty, malnutrition, infectious diseases, and disorders related to pregnancy and childbirth. The necessity of physical activity is reduced as rural communities with manual agriculture are replaced by urban settlements with office jobs and motorized means of transportation and housekeeping. Diets are enriched as vegetables and coarse grains are replaced by refined sugars and animal fats. The affluent environments lead to obesity, dyslipidemia, hypertension, and ultimately noncommunicable diseases, such as cardiovascular diseases, cancer, chronic respiratory diseases, and diabetes. Developing populations progress through the transition from adverse to affluent environments more rapidly than western populations.1–6

Meanwhile, it is debated to what extent public health organizations should prioritize the prevention and treatment of noncommunicable diseases in developing populations. Here, we emphasize that developing populations are more susceptible than western populations to acquire noncommunicable diseases in affluent environments, because, as a consequence of their rapid transition, their genetic, cultural, and epigenetic characteristics do not match with these new environments.

During most of history, humans have lived under adverse environmental conditions, whereby notably malnutrition and infectious diseases compromised survival. Because of these environmental stressors, preferentially those individuals survived who carried genetic variants benefiting efficient nutrient consumption and resistance against infections. As a result of this natural selection, humans are bestowed with genes that program thrifty and proinflammatory characteristics.7–10

Western populations have passed through a transition from adverse to affluent environments over multiple generations. This transition has minimized the burden of malnutrition and infectious diseases, improved survival of individuals with wasteful and anti-inflammatory characteristics, and consequently, relaxed the selection of genetic variants that program thrifty and proinflammatory characteristics. It is unlikely, however, that a population's genome has changed dramatically over few generations. Many individuals carry the genetic variants that have been selected to match previous adverse environments, but mismatch the current affluent environments. The thrifty and proinflammatory genetic variants expressed in an environment with abundance and hygiene contribute to noncommunicable diseases.7–10

Cultural customs and beliefs are transmitted from generation to generation and largely influence behavior and health. The transgenerational transmission of culture is subject to evolutionary processes similarly to genes. Since the transmission of culture is dependent on the survival and reproduction of its executors, culture adapts to changes in the environment like the genes they carry.12

It has long been the cultural ideal to be corpulent and physically inactive, because these characteristics represent wealth and fitness in adverse environments where food is scarce and manual labor necessary. In western populations, after their transition to affluent environments, the ideal has changed over a few generations into a new ideal of being slim and physically active with wealthy individuals in the vanguard.13–15 The new ideal matches the new environments, in which being slim and physically active conserves health and prosperity by preventing noncommunicable diseases.

The cultures of many developing populations still embrace corpulence and physical inactivity, because they are still regarded to represent wealth, beauty, health, and fertility. Here, terms for corpulence have positive connotations and are popular names of artists and songs, whereas slimness is linked to malnutrition and infectious diseases like acquired immune deficiency syndrome (AIDS) and tuberculosis. Corpulent women are esteemed as attractive partners and suitable mothers; corpulent men are ascribed power and status. Some developing populations practice ritual fattening to prepare young women for marriage.13–15 Since the transition of these populations to affluent environments has started recently and takes place within a generation, the cultural ideal cannot adapt timely to the new environmental conditions. The ideal of corpulence and physical inactivity that has represented survival and fertility until recently now stimulates adherence to unhealthy diets and inactive lifestyles and puts developing populations at increased risk of noncommunicable diseases.

During development in the first period of life, the human genome is adjusted by environmental cues through epigenetic changes. These changes modulate the transcription and the actions of genes to maximize fitness under the expected environmental conditions during life. The epigenetic programming is attuned to the environment experienced in early life and continues to have its effects in later life.10,16

Western populations are hardly exposed to food shortage and infections early in life. Several generations have been epigenetically attuned to abundance and hygiene, which matches the affluent environments being present throughout their later lives.

In developing populations going through a rapid transition from adverse to affluent environments, all but the latest generations have been exposed to food shortage and infections early in life, whereas many more enjoy abundance and hygiene later in life. Their epigenetic adjustments, promoting thriftiness and proinflammatory characteristics, match the expected adverse environment, but mismatch the current affluent environment. When children are exposed to environmental stress before or shortly after birth, like malnutrition manifested as impaired growth, they retain health if food remains scarce throughout their lives.7 However, if food becomes abundant later in life, these children are at increased risk to develop obesity and noncommunicable diseases like cardiovascular diseases and diabetes.10,16 As a well-studied example, epigenetic adjustments have been found that explain the increased risks of noncommunicable diseases in children born during the Dutch Hunger Winter, while afterward raised in economic prosperity.17

From 2015 onward, the Millennium Development Goals are succeeded by newly formulated Sustainable Development Goals, which form the core of the United Nations' (UN) Post-2015 Development Agenda. The new goals have been adopted during a Special Summit last September. Although noncommunicable diseases are addressed with the goal to “reduce by one third premature mortality from non-communicable diseases through prevention and treatment,” the Sustainable Development Goals persist to view the eradication of poverty and hunger as the greatest global challenge, next to the combat of diseases that have long been dominant in developing populations, such as infectious diseases and disorders related to pregnancy and childbirth.19 Some have supported this prioritization, also in this journal.20 By contrast, organizations like the NCD Alliance and the Lancet NCD Action Group have endeavored after the recognition of noncommunicable diseases as an urgent threat to global health and development.6,21 Here we add evolutionary arguments to their plea.

The mismatch between the inherited characteristics and the new affluent environments of developing populations can be minimized when these environments are reorganized to facilitate and encourage a healthy diet and physical activity in daily life. Based on the preventive knowledge and skills obtained in western populations, detailed cost-effective practicable guidelines have been written to create such environments in developing populations, for example, by the World Health Organization.3,4,22 In short, they recommend opportunities of physical exercise in the environment, campaigns and regulations to counteract advertisements and attractiveness of unhealthy diets, public education about unhealthy and healthy lifestyles, and collaborations between political, commercial, and health-care sectors as well as investments by these organizations for the prevention, screening, and treatment of noncommunicable diseases. The implementation of these guidelines is essential for the prevention of noncommunicable diseases. Global collaborative efforts like the UN's Post-2015 Development Agenda should acknowledge and support this important and urgent task of public health organizations. Only in such a way can we protect the current and future generations of developing populations from the emerging epidemic of noncommunicable diseases.