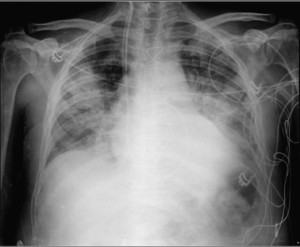 Solid organ transplant recipients can acquire Strongyloides stercoralis from an infected donor. The diagnosis of S. stercoralis in immunocompromised individuals may be challenging due to a lower sensitivity of available parasitological and serological methods, compared with immunocompetent individuals. Recently, a real-time polymerase chain reaction (RT-PCR) in stool has been developed for S. stercoralis diagnosis. We report two cases of S. stercoralis infection transmitted by a donor to two solid organ transplant recipients, who were diagnosed with RT-PCR in stool. This test could play an important role in S. stercoralis diagnosis in immunosuppressed patients, facilitating rapid treatment initiation and reducing the risk of severe strongyloidiasis. Adherence to current recommendations of screening among donors and recipients from endemic areas is also urgently needed.

Strongyloides stercoralis causes an opportunistic infection among immunosuppressed individuals. Chronically infected recipients of solid organ transplants (SOTs) from endemic areas have an increased risk of severe strongyloidiasis, because of their immunosuppressed status.1 In recent years, some authors have reported the transmission of S. stercoralis from infected donors to recipients.2–5 Interestingly, most cases were diagnosed when recipients presented with hyperinfection syndrome and donors were found to have S. stercoralis on retrospective testing.

Routine diagnosis of S. stercoralis is based on parasitological methods and serology, although their performance is far from optimal.6 Real-time polymerase chain reaction (RT-PCR) has emerged as a promising diagnostic tool for S. stercoralis.7 Little is known about its potential role in subjects with a depressed cellular immune response, such as SOT recipients.

We describe the usefulness and potential role of RT-PCR for the diagnosis of S. stercoralis in immunosuppressed individuals. This technique was used to detect the transmission of the parasite from an infected donor to two SOT recipients.

A 45-year-old female patient from Paraguay was admitted to a Spanish hospital with 1-month history of dyspnea, dry cough, and fever. The patient had a previous diagnosis of systemic lupus erythematosus with nephropathy and was under chronic therapy with steroids and mycophenolate mofetil. Upon admission, her chest X-ray showed bilateral alveolo-interstitial infiltrates and blood tests revealed an acute renal failure and a nonhemolytic anemia.

The patient was then treated with methylprednisolone, rituximab, mycophenolate mofetil, and 4 days of immunoglobulins without clinical improvement. Broad-spectrum antibiotics were maintained. Ten days after admission, the patient developed a sudden hypertensive emergency associated with coma and nonreactive bradycardia. A brain CT revealed bilateral intracerebral hemorrhage, and the patient finally died after evolving to brain death.

The family consented for organ procurement and heart and liver were extracted for transplantation. Since the donor had lived in an endemic area, S. stercoralis serology was then performed using the commercial serological test IVD-ELISA (IVD Research, Carlsbad, CA), which detects IgG antibodies by using somatic antigens from S. stercoralis larvae. A positive result (i = 4.49 U/μL) was received on day 9 posttransplant. Transplant teams and organ procurement organizations were alerted.

A 66-year-old female patient with end-stage hepatic cirrhosis by hepatitis C virus infection underwent orthotopic liver transplantation. She was born and had lived in Spain during all her life. Immunosuppressive therapy was initiated with basiliximab, methylprednisolone, and mycophenolate mofetil.

On day 9, after receiving the positive result of S. stercoralis serology from the donor, ivermectin was empirically initiated at a dose of 200 μg/kg/day. Two stool samples were collected, but no larvae were found after direct examination. Strongyloides stercoralis serology was negative (i = 0.035 U/μL). The patient received 14 days of ivermectin, and stools were monitored for larvae, which were not found on direct examination.

The patient followed a severe clinical course, presenting multiple complications 10 days after ending ivermectin. She was diagnosed with acute hepatitis by type 1 and 2 herpes viruses and abdominal septic shock, requiring treatment with vasopressors. She was treated with acyclovir, meropenem, and vancomycin, but finally needed intravenous colistin because of multiresistant Pseudomonas aeruginosa bacteremia and bilateral pneumonia. The patient developed multiorgan failure, despite all treatment efforts, and died on day 34 posttransplant.

Stool samples collected before ivermectin initiation were sent to the National Center for Microbiology (CNM-ISCIII), where RT-PCR for S. stercoralis was performed using the pair of primers designed from S. stercoralis 18S rRNA gene sequence.7 The amplification of the extracted DNA from previously concentrated stool samples was carried out according to the protocol described by Saugar and others.8 This test resulted positive.

A 56-year-old male patient was diagnosed with acute myocarditis and eventually cardiogenic shock that needed mechanical circulatory support with extracorporeal membrane oxygenation. Endomyocardial biopsy only showed fibrosis but with no myocardial cells. During the next month, his condition did not improve and he was considered for orthotopic cardiac transplantation. He was born and had lived in Spain during all his life. After transplantation, he was initiated on immunosuppressive therapy with steroids, basiliximab, tacrolimus, and mycophenolate mofetil. Pathological analysis of the recipient's heart showed giant cell myocarditis.

All microbiological examinations of blood and bronchoalveolar lavage fluid were negative for bacteria, virus, and fungi. Upon knowledge of donor's positive S. stercoralis serology, on day 9 posttransplant, empirical oral treatment with ivermectin 200 μg/kg/day and albendazole 400 mg every 12 hours was initiated and the dose of tacrolimus and steroids was decreased. The patient's symptoms improved rapidly until complete resolution with radiologic disappearance of infiltrates. Treatment continued for 3 weeks, and immunosuppressive drugs were reintroduced gradually. Two stool samples were negative for larvae on direct examination, and the serology was nonreactive. The patient was finally discharged. Stool samples collected before ivermectin initiation were sent to CNM-ISCIII and tested positive for S. stercoralis by RT-PCR.

Our findings stress the importance of S. stercoralis screening among donors from endemic areas. It also highlights that RT-PCR in stools can provide an early diagnosis in those individuals receiving SOT from infected donors, prompting an early treatment and preventing the development of hyperinfection syndrome.

This case adds to the existing reports of S. stercoralis transmission from donors to SOT recipients,2–5 but there are some important differences in our case. All donor-to-recipient transmissions described so far were investigated when at least one SOT recipient presented with severe strongyloidiasis. Most cases were diagnosed 2–3 months after transplantation,2 probably after a sufficient period of immunosuppressive therapy. However, in our case, the donor was diagnosed post-mortem with a positive serology, which prompted investigations and empirical treatment of SOT recipients. One could even hypothesize that the donor died of hyperinfection syndrome, missed by the treating physicians. An alternative route of infection, in contrast to the common presentation of strongyloidiasis, could explain the shorter prepatent period shown in these cases.

Interestingly, recipient 2 presented with alveolar hemorrhage and bilateral lung infiltrates shortly after transplantation, rapidly improving after adding ivermectin and albendazole. This suggests the development of an acute hyperinfection syndrome. Unfortunately, we were unable to keep enough sample of bronchoalveolar lavage fluid for RT-PCR, which may have provided a definite diagnosis. In contrast, recipient 1 did not have symptoms attributable to strongyloidiasis before ivermectin treatment. Possible reasons for this are a higher larvae burden in the heart recipient due to contiguity in the surgical field and that recipient 2 had previously received high-dose steroids for myocarditis treatment.

Both recipients had negative stool microscopy and serology, which occurs in acute infections and illustrates the challenges that clinicians face with S. stercoralis diagnosis in immunosuppressed individuals. Apart from the low sensitivity of direct fecal examination, serological tests may provide a false-negative result in acute cases, especially in immunocompromised patients.6 The possibility of intermittent low larvae output, especially in acute phases of infection, adds more complexity to diagnostic efforts.

Although RT-PCR in stool is still under development, some studies have shown high sensitivity and specificity in S. stercoralis diagnosis.7,9 However, this method may lose sensitivity if larvae output is low,10 which can be overcome by stool concentration, as described by Saugar and others.8 Despite the need of further validation of RT-PCR for S. Strongyloides detection, our report suggests that this technique could reduce the time to diagnosis and increase the diagnostic yield in possible donor-to-recipient transmissions.

The American Society of Transplantation recommends screening S. stercoralis in donors and candidate recipients from endemic areas and/or with unexplained eosinophilia.11 However, these guidelines are often not followed by physicians worldwide, although a rapid detection can prompt antiparasitic treatment and decrease the risk of severe strongyloidiasis. A recent publication including data from the New York Organ Donor Network showed that among 233 eligible potential donors screened for S. stercoralis, 10 (4.3%) had a positive serological result. Of note, no cases of infection occurred among those recipients who received an organ from infected donors, after receiving prophylaxis.12

Transplant teams should be aware that strongyloidiasis is widely distributed in tropical and subtropical areas worldwide,13 with higher transmission in regions with poorer socioeconomic conditions. Migrants from these regions are expected to present high infection rates such as in southeast Asia, where prevalence rates of up to 50% in the general population may be present.14

In summary, full implementation of current guidelines regarding S. stercoralis screening among donors is urgently required to avoid the occurrence of hyperinfection syndrome in SOT recipients. RT-PCR can be an effective diagnostic tool for an early detection of transmission among SOT recipients, facilitating a rapid initiation of antiparasitic treatment.