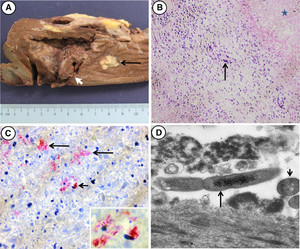 Incidental Splenic Granuloma Due to Burkholderia pseudomallei: A Case of Asymptomatic Latent Melioidosis?

We report a rare case of an asymptomatic latent melioidosis lesion in a posttraumatic splenectomy specimen from a diabetic patient. The 2-cm yellowish, lobulated lesion was found in the splenic parenchyma well away from the traumatized areas. Microscopically, it consisted of a central area of necrosis and exudate surrounded by macrophages, epithelioid cells, lymphocytes, and occasional multinucleated giant cells. Burkholderia bacilli were detected by a novel in situ hybridization (ISH) assay, and confirmed by polymerase chain reaction and sequencing to be Burkholderia pseudomallei. As melioidosis was not suspected initially, bacterial culture was not done but electron microscopy showed morphologically viable and dividing bacilli in the lesion. Moreover, the surgical wound became infected with B. pseudomallei several days post-surgery. After treatment with ceftazidime and trimethoprim/sulfamethoxazole, the wound infection cleared. We believe this could be a unique case of asymptomatic latent melioidosis in the spleen. In endemic countries, chronic granulomas should be investigated for B. pseudomallei infection, and if available, ISH may be helpful for diagnosis.

Melioidosis is an infectious disease caused by Burkholderia pseudomallei, a gram-negative bacterium endemic in southeast Asia and northern Australia. The various forms of human melioidosis include acute fulminant septicemia, localized abscess, chronic melioidosis, and latent melioidosis.1 Latent melioidosis is defined as an asymptomatic infection, which later can develop into active disease at an indeterminate time after the initial infection.2 It may remain clinically asymptomatic for many years, even as long as 62 years.3,4 Symptomatic activation of latent melioidosis was reported in about 4% of a very large series of 540 cases in a 20-year study in Australia.5

Herein, we report a unique, incidental case of asymptomatic latent melioidosis lesion in the spleen that was discovered after posttraumatic splenectomy. The lesion, a single discrete granuloma, was strongly suspected to be melioidosis after we applied a novel in situ hybridization (ISH) method that could detect Burkholderia bacilli in formalin-fixed, paraffin-embedded (FFPE) tissues. This method uses a specific digoxigenin-labeled probe that hybridizes with Burkholderia bacterial 16S ribosomal RNA.6

A 54-year-old man presented to the Accident and Emergency Department, University of Malaya Medical Center, Malaysia, with left-sided chest pain and an acute abdomen after he fell off his motorcycle. Clinical examination revealed a tender left chest wall and reduced breath sounds over the left lung. The chest X-ray showed left 5th to 8th rib fractures and hemopneumothorax for which a chest drain was inserted. Since there was abdominal tenderness and guarding, traumatic rupture of the spleen was suspected, and this diagnosis was supported by ultrasound findings that revealed fluid in the left splenorenal recess. At surgery, hemoperitoneum of 1.5 L was found and the lacerated spleen was removed. The patient had no history of recurrent abdominal pain but had a past history of diabetes mellitus and hypertension. His previous diabetic treatment record is unavailable to us and his compliance was unknown. Retrospective review of patient's case records suggested that the patient's diabetes mellitus may have been managed elsewhere, if at all.

The 13 × 5 × 4-cm spleen, which weighed about 300 g, had a 12-cm lateral surface laceration and a 5-cm hilar laceration. In addition, there was a single discrete, whitish yellow lobulated lesion of 2 × 2 × 1.5 cm within the parenchyma, which contained some pus-like material (Figure 1A). There was no apparent connection between this lesion and the lacerations. Microscopically, the lesion consisted of coalescing granulomas with central necrosis and exudate surrounded by macrophages, epithelioid cells, lymphocytes, occasional neutrophils, and a few multinucleated giant cells, some resembling Langhans giant cells (Figure 1B). The Ziehl–Neelsen (ZN) and Grocott methenamine silver (GMS) stains for acid-fast bacilli and fungus, respectively, were negative. A novel ISH method to detect Burkholderia bacilli6 highlighted rod-shaped bacilli within and around macrophages in the areas of necrosis (Figure 1C). Electron microscopy showed intact and dividing bacilli consistent with viable bacteria (Figure 1D). Using whole DNA extracted from FFPE tissue sections, the presence of B. pseudomallei was confirmed by polymerase chain reaction7 and sequencing.

In the immediate postoperative period, the patient was commenced on cefoperazone and metronidazole for 2 days, which was changed to piperacillin/tazobactam and vancomycin until his discharge 10 days after admission. However, 4 days later, he returned to the hospital with a 2-day history of fever, chills, and rigors and purulent discharge from his abdominal surgical wound. The wound swabs only grew Acinetobacter baumannii and Klebsiella pneumoniae, but there was no attempt to culture B. pseudomallei. He was commenced on intravenous amoxicillin/clavulanic acid (Augmentin, Karnataka Antibiotics and Pharmaceuticals Limited, Bangalore, India) for a day followed by oral amoxicillin/clavulanic acid for a week. With daily dressing, the infected wound apparently improved with only minimal clear serous discharge on a follow-up visit. On the basis of the ISH results of a probable diagnosis of melioidosis, bacterial culture of the wound discharge was done, and B. pseudomallei infection was confirmed 3 weeks after the surgery. Since the culture was sensitive to amoxicillin/clavulanic acid, the patient was continued on this antibiotic for one more week. Over the next 3 weeks, the patient was asymptomatic, and the wound clean and granulating, hence he was discharged from follow-up without any antibiotics.

After 16 months, the patient presented with multiple superficial abscesses around his abdominal surgical scar for which he was recommenced on amoxicillin/clavulanic acid. Wound swabs were initially negative but later swabs were confirmed to be positive for B. pseudomallei by culture and PCR. This time the bacteria were found to be resistant to amoxicillin/clavulanic acid but sensitive to ceftazidime, doxycycline, imipenem, and trimethoprim/sulfamethoxazole. He was commenced on oral ceftazidime for 5 days followed by ceftazidime and trimethoprim/sulfamethoxazole (Bactrim, Pharmaniaga Manufacturing Berhad, Selangor, Malaysia) for 3 months. The wound healed and no further positive culture results were reported. At about the time of the wound infection and antibiotic treatment, the available HbA1c values were in the range of 7–14.5% (normal < 6.5%) suggesting that his diabetes mellitus was not adequately controlled. Unfortunately, no further information about his diabetic treatment was available.

We report an unusual case of melioidosis, which may be a unique case of asymptomatic latent melioidosis. Strictly speaking, since the patient did not complain of any previous abdominal symptoms that could be related to the splenic lesion, he could be considered to have latent melioidosis. Several anecdotal reports of latent melioidosis that became symptomatic have manifested as acute fulminant septicemia, local abscess, or chronic melioidosis in the skin, kidney, liver, and spleen.2–4,8 It is not clear if these sites of localized recurrences were the same locations/organs in which the asymptomatic latent lesions were originally found. This case suggests that the spleen could be a site for latent melioidosis, with the lesion in the form of an isolated discrete granuloma in which viable B. pseudomallei organisms appeared to be confined but not destroyed by the inflammatory process. Unfortunately, it will never be known how long this splenic lesion had or would have remained latent, and if and when it becomes symptomatic, how it would have manifested clinically. Perhaps due to the nature/location of the lesion, the infection may have remained asymptomatic.

From the pathological perspective, this splenic lesion is a typical granulomatous inflammation, and therefore represents a chronic inflammation, that is, inflammation arbitrarily and imprecisely defined as lasting for weeks or months.9 Thus, although we do not know for certain the duration of this splenic lesion, we believe it had probably existed for some time. This splenic granuloma cannot be confidently distinguished by light microscopy from other infective granulomata caused by Mycobacterium tuberculosis or fungal organisms. However, the ZN and GMS stains for acid-fast bacilli and fungus, respectively, were negative, and the ISH demonstrated the presence of Burkholderia bacilli confirmed by PCR and sequencing to be B. pseudomallei. Ultrastructurally, the bacilli appeared to be viable,10 and may even be dividing (Figure 1D). Although bacterial viability was not confirmed by direct culture from the splenic lesion, surgical wound infection by B. pseudomallei so soon after splenectomy is consistent with bacterial viability since the infection was more likely to be related to the surgery rather than to an infection originating from other parts of the body or even the external environment. Intriguingly, we did not find any demonstrable connection between the lacerations and the splenic lesion, so whether bacteria from the lesion were responsible for wound contamination is unknown. Granulomatous inflammation has also been described in the spleen11 and in chronic melioidosis, which has been defined as symptomatic melioidosis lasting more than 2 months.5

Diabetes mellitus, chronic renal failure, alcoholism, and other factors are well-known risk factors for melioidosis,1 so it is not surprising that our diabetic patient had a splenic latent melioidosis lesion. The treatment of the surgical wound infection with amoxicillin/clavulanic acid was effective initially but bacterial resistance to the antibiotic developed more than 16 months later. The use of amoxicillin/clavulanic acid in maintenance therapy for B. pseudomallei infection carries higher relapse rates for unknown reasons.12 With more effective oral trimethoprim/sulfamethoxazole and ceftazidime, the infection eventually subsided.

In endemic areas, patients with splenic granuloma asymptomatic or otherwise, especially in patients with diabetes mellitus and other risk factors for melioidosis, should be investigated for this infection after tuberculosis and fungal infections had been excluded. If bacterial cultures are not available, ISH and other molecular methods such as PCR and sequencing may be useful complementary diagnostic tools. In our patient, a high index of suspicion and the availability of a novel ISH assay played a pivotal role in the diagnosis of this latent melioidosis lesion.