Latrine use by child age.

Main disposal place by place of defecation of those who reported that their child ever defecated outside the latrine (N = 100). *Other: on paper towels, in the child's clothes, in the forest or a field, or on furniture.

Reasons for satisfaction/dissatisfaction with current products by type. 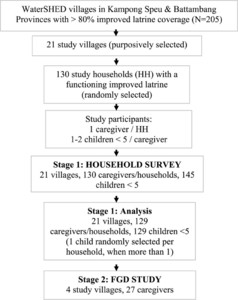 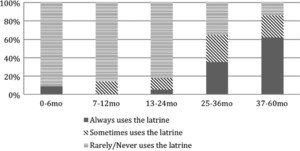 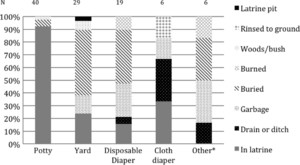 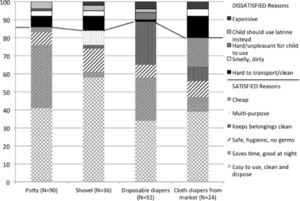 Infant and Young Child Feces Management and Enabling Products for Their Hygienic Collection, Transport, and Disposal in Cambodia

In Cambodia, children's feces are rarely disposed of in an improved sanitation facility. This study examines current practices and the role that enabling products may play in increasing hygienic management of infant and young child (IYC) feces in households with access to improved sanitation. A survey was conducted with the primary caregiver of a child under 5 years of age in 130 homes with an improved latrine in 21 villages across two provinces in Cambodia. Two focus group discussions per province were conducted after the survey to obtain caregiver feedback on new enabling products for hygienic management. Among caregivers, 63% reported child feces disposal in an improved latrine but only 36% reported doing so consistently. Besides child age, years of latrine ownership, caregiver age, consistency of adult latrine use, and presence of child feces management tools in the latrine were associated with hygienic disposal. The youngest caretakers with the newest latrines and youngest children were least likely to dispose of IYC feces hygienically, representing a key target group for interventions to improve hygienic disposal in Cambodia. Reusable diapers, child-friendly potties, and possibly latrine seats, that offer child safety, time and cost savings, and easy disposal and cleaning could potentially facilitate hygienic disposal for these ages.