Frequency, by week of onset, of dengue cases and noncases in Pemba and Nampula cities, 2014. 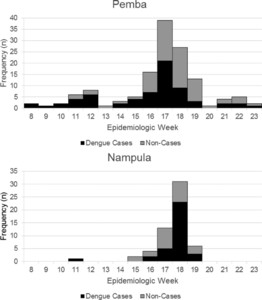 Clinical and Epidemiological Characterization of the First Recognized Outbreak of Dengue Virus-Type 2 in Mozambique, 2014

Since the first reported epidemic of dengue in Pemba, the capital of Cabo Delgado province, in 1984–1985, no further cases have been reported in Mozambique. In March 2014, the Provincial Health Directorate of Cabo Delgado reported a suspected dengue outbreak in Pemba, associated with a recent increase in the frequency of patients with nonmalarial febrile illness. An investigation conducted between March and June detected a total of 193 clinically suspected dengue patients in Pemba and Nampula, the capital of neighboring Nampula Province. Dengue virus-type 2 (DENV-2) was detected by reverse transcriptase polymerase chain reaction in sera from three patients, and 97 others were classified as probable cases based on the presence of DENV nonstructural protein 1 antigen or anti-DENV immunoglobulin M antibody. Entomological investigations demonstrated the presence of Aedes aegypti mosquitos in both Pemba and Nampula cities.