(A) Incubation period of V2 and V3 groups; Mann–Whitney test was used to calculate differences between the groups. No statistical difference was found. (B) Evolution period; Mann–Whitney test showed no significant difference (P > 0.05) between the groups. (C) Survival analysis between groups during 30-day observation period; Mantel–Cox test demonstrated a statistical significance between V3 vs. V2 (P = 0.003). 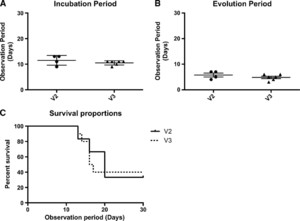 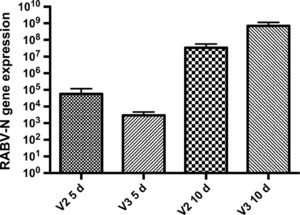 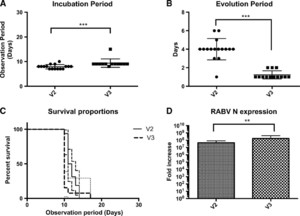 Rabies is a lethal infectious disease that causes 55,000 human deaths per year and is transmitted by various mammalian species, such as dogs and bats. The host immune response is essential for avoiding viral progression and promoting viral clearance. Cytokines and chemokines are crucial in the development of an immediate antiviral response; the rabies virus (RABV) attempts to evade this immune response. The virus's capacity for evasion is correlated with its pathogenicity and the host's inflammatory response, with highly pathogenic strains being the most efficient at hijacking the host's defense mechanisms and thereby decreasing inflammation. The purpose of this study was to evaluate the expression of a set of cytokine and chemokine genes that are related to the immune response in the brains of mice inoculated intramuscularly or intracerebrally with two wild-type strains of RABV, one from dog and the other from vampire bat. The results demonstrated that the gene expression profile is intrinsic to the specific rabies variant. The prompt production of cytokines and chemokines seems to be more important than their levels of expression for surviving a rabies infection.