Plain and enhanced computed tomography (CT) scans from patient no. 2. The CT scans were obtained before the first surgery (A and B) and the second surgery (C and D). (A and B) Plain CT showing multiple hydatids in the abdominal and pelvic cavities and vesicae that were formed as a result of Echinococcus granulosus infection (arrows). (C) Plain and (D) enhanced CTs of the chest. 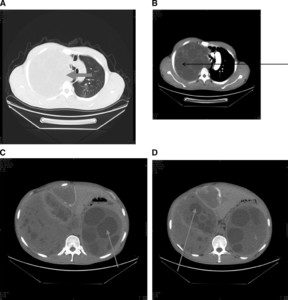 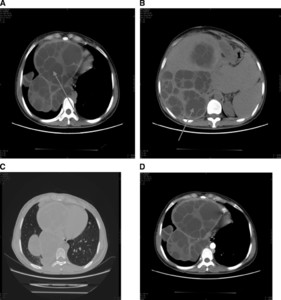 Anaphylactic shock represents a serious complication of echinococcosis as up to 4.6% of patients die as a result of its severity and improper handling. Once a definite diagnosis is made, effective treatments need to be immediately initiated. Here, we report the immunological characteristics and management of two patients with recurrent anaphylactic shock concurrent with the surgical removal of hydatid cysts. Both patients had systemic echinococcosis classified as cystic echinococcosis type 2 (CE2) with multiple, immature cysts (absence of calcification and necrosis). In addition, both patients had increased eosinophils and basophils before surgery, as well as elevated crude hydatid cyst fluid antigen (anti-EgCF) and hydatid cyst fluid native antigen B (anti-EgB) antibodies and high IgG levels. Although we cannot definitively predict which patients are at risk for cyst fluid leakage or anaphylactic shock at present, clinicians may consider taking precautions before surgery on encountering patients with a similar profile to prevent the occurrence of anaphylactic shock and the likelihood of a second incident. However, these observations need to be confirmed in further studies with a larger number of patients.