Map of the study area in the Australian Torres Strait. Mosquitoes were collected from the islands of Saibai, Boigu, Badu and Moa (▴).

Species accumulation curves suggest that most common mosquito species attracted to our trap design in villages were sampled, whereas further sampling in natural vegetation could have resulted in capturing more species, especially rare ones. 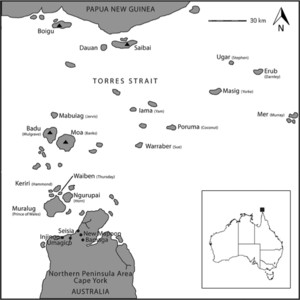 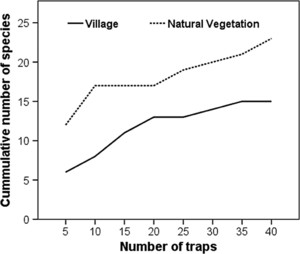 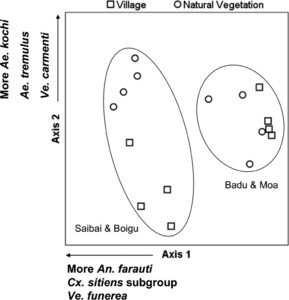 Land use changes, such as deforestation and urbanization, can influence interactions between vectors, hosts, and pathogens. The consequences may result in the appearance and rise of mosquito-borne diseases, especially in remote tropical regions. Tropical regions can be the hotspots for the emergence of diseases due to high biological diversity and complex species interactions. Furthermore, frontier areas are often haphazardly surveyed as a result of inadequate or expensive sampling techniques, which limit early detection and medical intervention. We trialed a novel sampling technique of nonpowered traps and a carbon dioxide attractant derived from yeast and sugar to explore how land use influences mosquito communities on four remote, tropical islands in the Australian Torres Strait. Using this technique, we collected > 11,000 mosquitoes from urban and sylvan habitats. We found that human land use significantly affected mosquito communities. Mosquito abundances and diversity were higher in sylvan habitats compared with urban areas, resulting in significantly different community compositions between the two habitats. An important outcome of our study was determining that there were greater numbers of disease-vectoring species associated with human habitations. On the basis of these findings, we believe that our novel sampling technique is a realistic tool for assessing mosquito communities in remote regions.