Geographic distribution of invasive melioidosis in Sri Lanka. (A) Location of culture-positive melioidosis cases by year of diagnosis notably absent from the south central hill country including Sabaragamuwa Province and most of the north, (B) distribution of cases by rainfall zones, and (C) by major crops: golden brown = rice, olive = rubber, and pink = tea. 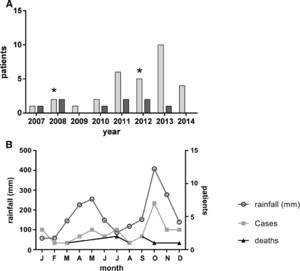 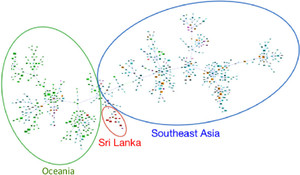 The epidemiologic status of melioidosis in Sri Lanka was unclear from the few previous case reports. We established laboratory support for a case definition and started a nationwide case-finding study. Suspected Burkholderia pseudomallei isolates were collated, identified by polymerase chain reaction assay, referred for Matrix Assisted Laser Desorption Ionization-Time of Flight analysis and multilocus sequence typing (MLST), and named according to the international MLST database. Between 2006 and early 2014, there were 32 patients with culture-confirmed melioidosis with an increasing annual total and a falling fatality rate. Patients were predominantly from rural communities, diabetic, and male. The major clinical presentations were sepsis, pneumonia, soft tissue and joint infections, and other focal infection. Burkholderia pseudomallei isolates came from all parts of Sri Lanka except the Sabaragamuwa Province, the south central hill country, and parts of northern Sri Lanka. Bacterial isolates belonged to 18 multilocus sequence types, one of which (ST 1137) was associated with septicemia and a single-organ focus (Fisher's exact, P = 0.004). Melioidosis is an established endemic infection throughout Sri Lanka, and is caused by multiple genotypes of B. pseudomallei, which form a distinct geographic group based upon related sequence types (BURST) cluster at the junction of the southeast Asian and Australasian clades.