Cumulative graphs of the incidence of scrub typhus from September through December, 2001–2013. 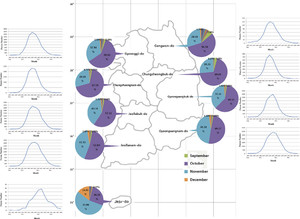 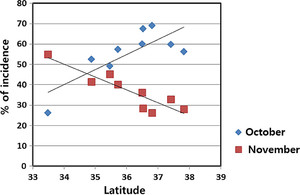 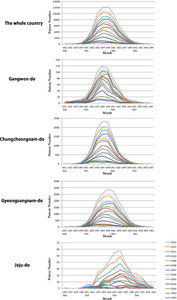 In South Korea, scrub typhus is one of the most common rickettsial diseases. The number of scrub typhus patients has increased in South Korea, a total of 69,210 cases were reported from 2001 to 2013. The seasonality and relation of scrub typhus cases to latitude were analyzed in this article using data obtained from the National Notifiable Diseases Surveillance System website of the Korea Centers for Disease Control and Prevention. The incidence of scrub typhus tended to increase in the later months of the year, especially in October–December. In general, lower latitudes were associated with a later peak incidence. Our results suggest for the first time that the monthly observed incidence tended to increase in the later months of the year as the latitude decreased, and on a yearly basis in Korea.

Scrub typhus, also known as tsutsugamushi disease, is an acute febrile infectious disease caused by Orientia tsutsugamushi and is transmitted to humans through the bite of mites. This condition is characterized by focal or disseminated vasculitis, which may involve the lungs, heart, liver, spleen, and central nervous system.1

Scrub typhus occurs throughout the Asia-Pacific region and represents a significant public health issue in Asia,2 where 1 billion people are at risk for this disease.3 Moreover, an increasing incidence of scrub typhus has been reported in some Asian countries.4 The incidence of scrub typhus may be related to temperature, rainfall, and socioeconomic factors.5,6 The first Korean case of scrub typhus was reported in 1985.7 In 1994, there were 238 scrub typhus cases, and this number increased significantly to 1,768 cases in 2000. More than 4,500 cases have been reported annually since 2004, and 10,365 cases were reported nationwide in 2013.8,9 As a result, scrub typhus has become the most common rickettsial disease in the country. Although the number of scrub typhus patients has increased in South Korea,10 the geographical and monthly distributions of this disease are poorly understood. Therefore, this study aimed to describe the annual pattern and latitudinal distribution of scrub typhus incidence in South Korea from 2001 to 2013.

Scrub typhus is categorized in Group III of the nationally notifiable diseases in South Korea. Physicians who diagnose suspected or confirmed cases have reported these cases to the Korea Centers for Disease Control and Prevention (KCDC) since 1994.9,10 This study used raw data obtained from the National Notifiable Diseases Surveillance System website of KCDC from 2001 to 2013. A total of 69,210 scrub typhus cases were analyzed according to region, month, and year of incidence. The relation between the incidence of scrub typhus and latitude was statistically assessed using the Pearson correlation coefficient (R).

Korea has four distinct seasons: spring, summer, autumn, and winter. With the exception of Jeju Island that lies in a subtropical climatic zone, Korea has a temperate climate. South Korea extends from latitude 33° to 38° N. The regions and provinces of Korea are divided into northern, central, and southern areas. Nine provinces (Gangwon, Gyeonggi, Chungcheongbuk, Chungcheongnam, Gyeongsangbuk, Jeollabuk, Gyeongsangnam, Jeollanam, and Jeju) were surveyed from 2001 to 2013 (Figure 1), and for each province, scrub typhus cases were grouped according to month. We then compared the incidence of scrub typhus between provinces, the results of which are shown in Figure 1. The highest incidence was reported in October in all provinces except Jeju, although the incidence tended to increase in both November (blue color) and December (orange color) as the latitude decreased (Figure 1). In Jeju, unlike other provinces, the highest incidence occurred in November (54.96%). Furthermore, Jeju Province showed a significantly higher incidence in December (14.45%) compared with the other regions.

A total of 69,210 scrub typhus cases were reported in South Korea from 2001 to 2013, with many of these cases occurring in October. Therefore, we chose four consecutive months from September to December and provinces that did not overlap each area on the latitude, for further analysis (Figure 3). We then collected and analyzed the data on a yearly basis using cumulative graphs and assessed whether any patterns existed. From 2001 to 2006, the peak incidence of scrub typhus occurred in the third or fourth week of October in South Korea. After 2007, peaks were observed between the fifth week of October and the first week of November. The apex of these peaks likely shifts to the later months as the number of incidences increased. For further analysis, the Gangwon, Chungcheongnam, and Gyeongsangnam provinces were selected as representative provinces for the northern, central, and southern areas, respectively. All these provinces showed that the peak incidence of scrub typhus tended to move to later months of the year; this pattern was more significant in Gangwon and Gyeongsangnam provinces than in Chungcheongnam province. In Jeju, the peak incidence appeared to occur at the same time each year. Unlike the other provinces, Jeju showed a gradually increasing incidence in December.

We also investigated the longitudinal effect on scrub typhus incidence, but there was no significant difference between the years studied according to longitude.

In Korea, scrub typhus is an endemic disease, which is generally thought to occur in autumn. Although it is evident that the number of scrub typhus cases has increased,10 there are few studies on the distribution of cases according to geography or time.

The recent increase in incidence of scrub typhus might be related to temperature, rainfall, land use, and various socioeconomic factors.5,6 It has also been proposed that global warming may lead to an increase in infectious diseases. Indeed, it was reported that a 1°C rise in temperature corresponded to a 14.98% increase in the number of monthly scrub typhus cases in Guangzhou, southern China.11

In southern regions of South Korea, Leptotrombidium scutellare is the predominant chigger and vector of scrub typhus.12 In the northern and central regions, Leptotrombidium pallidum is the dominant species of chigger, which can survive in the winter by staying dormant.12,13 Interestingly, the distribution and chigger index (CI) map of L. scutellare was identical to the incidence pattern of scrub typhus, whereas the CI map of L. pallidum and chigger mites overall showed no relationship with the incidence pattern.9 The increased density of L. scutellare may affect the high autumn incidence of scrub typhus.9 One previous report suggested that chigger abundance may be primarily influenced by temperature in temperate areas and precipitation in tropical regions.5 Because South Korea has both temperate and subtropical regions, it is likely that temperature and humidity are important factors in the incidence of scrub typhus. However, further studies on the relationship between the human incidence of scrub typhus and climate change are needed. The longevity of unfed larvae was reported to be approximately 2 months before winter because the ground starts to freeze.12 Global warming might therefore affect chigger abundance during autumn and in later months of the year as increasing temperatures and humidity13,14 may delay ground freezing, which could give chiggers the opportunity to feed on humans until the early winter. Therefore, we hypothesized that the extended active period of chiggers might correlate with an increasing incidence of scrub typhus in later months of the year.

A potential limitation of our study is that we did not consider the difference between the residential address of the reported patients and the site of infection. We think, however, no previous study has evaluated the correlation between latitudes and the incidence trend of scrub typhus. Our results are the first to show that the peak incidence tended to shift to the later months as the latitude decreased and as the number of incidences increased on a yearly basis. No vaccine is yet available for scrub typhus. Therefore, prevention is mainly based on avoiding the chigger bite. Considering the 1- to 2-week incubation period of scrub typhus, preventive measures should be taken concentrically before 2 weeks of the incidence. An awareness of the peak incidence might provide appropriate recommendations for surveillance and prevention. Identifying differences in the peak incidence of scrub typhus may have important implications for the prevention and control of this disease.