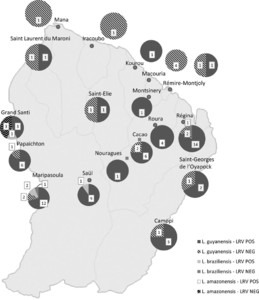 In South America, the presence of the Leishmania RNA virus type 1 (LRV1) was described in Leishmania guyanensis and Leishmania braziliensis strains. The aim of this study was to determine the prevalence distribution of LRV1 in Leishmania isolates in French Guiana given that, in this French overseas department, most Leishmania infections are due to these parasite species. The presence of the virus was observed in 74% of Leishmania spp. isolates, with a highest presence in the internal areas of the country.

Virus-like particles (VLPs) discovery began in the 1960s with the first report in the parasitic protozoan Entamoeba histolytica.1 Since then similar structures have been identified in an ever-expanding list of unicellular eukaryotes: Leishmania,2 Plasmodium,3 Naegleria,3 Giardia,4 Trichomonas,5 as well as in other parasite species and fungi.6 The first discovery of VLPs in Leishmania was reported by Molyneux2 in Leishmania hertigi, a nonhuman parasite species. The presence of VLPs in another Leishmania species was then highlighted by Tarr and others,7 namely the Leishmania (braziliensis) guyanensis species. Leishmania RNA virus (LRV) is an ico…sahedral encapsidated double-stranded 5.3-kb RNA virus, belonging to the Totiviridae family. This virus has been observed in the New World Leishmania species: L. (Viannia) guyanensis and L. (Viannia) braziliensis, in one strain of the Old World parasite Leishmania major, and in Leishmania aethiopica.8,9 New World strains are grouped into the LRV1 type, which is divided in 14 subtypes (LRV1-1 to LRV1-14) that spread over South America.7,10,11 Old World strains belong to the LRV2 type.9

The LRV complementary DNA (cDNA) was first completely sequenced by Stuart and others12 for the prototype virus termed LRV1-1. Then, complete cDNA sequences were reported by Scheffter and others13,14 for the LRV1-4 and LRV2-1 isolates. The LRV1-1 and LRV1-4 sequences share 77% nucleotide identity between themselves.14

In French Guiana, Leishmania species predominantly diagnosed are L. guyanensis, L. braziliensis, and occasionally Leishmania amazonensis (Simon and others, submitted data).15 Leishmaniasis represents a significant risk for those in contact with the forest. Our study aimed to determine the prevalence of LRV1 in the circulating isolates of Leishmania spp. in French Guiana and to establish its repartition on the territory.

When parasites reached a stationary phase, counting was performed in a Malassez cell. Pellets containing 1 × 107 parasites were constituted after culture by centrifugation for 5 minutes at 514 g and removal of the supernatant. The pellets were stored at −80°C until RNA extraction.

Total RNA was extracted using Trizol® (Ambion, Life Technologies, Carlsbad, CA) according to the manufacturer's recommendations, with minor modifications. Pellets were thawed at room temperature (RT) and homogenized with 1 mL of Trizol. After 15–30 minutes of incubation at RT, 0.2 mL of chloroform per milliliter of Trizol was added, vortexed for 15 seconds, and incubated for 2–15 minutes at RT. Phase separation by centrifugation for 10 minutes at 12,000 g and 4°C allowed recovering the upper phase to which 0.5 mL of isopropanol was added. The mixture was then incubated for 10 minutes at RT and centrifuged for 10 minutes at 12,000 g at 4°C. The RNA pellet was then washed with 75% ethanol, dried, and dissolved in 10 μL of diethylpyrocarbonate water. The RNA was stored at −80°C.

cDNA was synthesized using the SuperScript™ II Reverse Transcriptase (Invitrogen), according to the manufacturer's recommendations with random hexamers (Invitrogen). Then, PCR amplification of a 124-bp LRV fragment located in the most conserved LRV1 region was done with the LRV1 forward primer, LRV1-F1: 5′-CTGACTGGACGGGGGGTAAT-3′ and LRV1 reverse primer, LRV1-R1: 5′-CAAAACACTCCCTTACGC-3′ enabling to amplify all LRV1 subtypes that have been slightly modified from those of Ives and others.17 These primers were based on LRV1-1 and LRV1-4 genome sequences (Genbank accession nos.: LRV1-1: NC002063 and LRV1-4: NC003601). A denaturation step at 94°C for 2 minutes was followed by 40 cycles at 94°C for 30 seconds, 54°C for 30 seconds, and 72°C for 1 minute. The PCR was completed by a final elongation at 72°C for 5 minutes. PCR products were analyzed on a 2% gel agarose to verify the presence of amplification products at the expected size. The reference strain of L. guyanensis (MHOM/GF/97/LBC6) and water were used as positive and negative controls, respectively, in each reverse transcriptase (RT) PCR experiment.

The study was retrospective. All patients were informed (during consultation, with posters) that data and analysis of results may be used in research and that they have a right to refuse.

Figure 2 shows the distribution of Leishmania isolates carrying or not LRV across French Guiana. There were no significant differences between the proportion of LRV from coastal and inland communes (P = 0.22), however, there was a significant difference between the seaside and the rest of the territory (P < 0.001). Indeed, apart from Kourou, where the only available isolate was positive to LRV, isolates from Mana, Iracoubo, and Macouria were negative. Half isolates from Rémire were positive to LRV. In all inland communes, more than half of the isolates were LRV positive. In communes with the highest sampling effort, LRV presence was predominant: Regina with 82% (14/17) of positive isolates, Maripasoula 82% (14/17), Saül 100% (10/10), Cacao 75% (6/8), and Papaïchton 86% (6/7).

Leishmania RNA viruses can infect different Leishmania species. Surveys of New World parasites have identified LRV1 only in isolates that originated from the Amazon basin, such as L. guyanensis and L. braziliensis.7,10,18–20 The average molecular prevalence of LRV that we report here in Leishmania spp. isolates circulating in French Guiana is equivalent to the one described by Bourreau and others,21 but substantially higher (74%) than those reported in other South American countries, which ranged from 5.8% in Colombia, 18% in Peru, and 25.5% in the Brazilian city of Caratinga, Minas Girais.18–20 This difference can first be explained by the geographical origin of the Leishmania isolates and, second, by the type of biological material used for LRV detection. Indeed, in Colombia, the virus was detected from parasites originating from the Amazon area of the country whereas no virus was detected in other regions.18 In Brazil, Pereira and others22 reported two LRV1 positive isolates of 48 tested (4.1%). These two L. guyanensis positive isolates were from the Amazon region. In this study, we report the presence of LRV throughout the whole territory. This could be correlated to tropical climate conditions encountered in French Guiana. In contrast, the weaker presence of LRV along the coastal area was presumably due to the low density of vectors and reservoirs implying a low parasite transmission in this more urbanized area.23,24 Ecologic and epidemiologic factors related to Amazon region might be involved in the repartition of Leishmania parasites susceptible to harbor the LRV.18

Concerning the type of biological material used for the search of LRV in all previous studies, this search was performed on human biopsies containing low amounts of the amastigote form of the parasite.18–20,22 In our study, we used cultured parasites corresponding to the promastigote form (107 cells) in which the quantity of LRV has been reported to be higher due to virus multiplication in culture25 (personal communication). This could thus explain the large difference of prevalence observed between our results and those previously published.18–20,22

We here report the detection of LRV1 from different L. guyanensis and L. braziliensis isolates.7,10,18–20 None of the six L. amazonensis isolates tested were positive for LRV1. With the exception of the Leishmania panamensis species for which no LRV1 has been identified,18 no information is currently available for the other New World Leishmania species. Therefore, LRV1 has so far only been detected in parasite species of the Leishmania Viannia subgenus.

LRV infection of parasites seems to affect their virulence in a murine model of mucosal cutaneous leishmaniasis.17,26,27 To determine if the clinical evolution of infected patients can be affected by the presence of the virus or can be correlated, at least in part, to the genetic variability of the virus for which at least 14 subtypes have been identified, we plan to, based on the present results, to characterize the genetic diversity of different LRV1 isolates at the genomic level. These results should enable us to gain insights into the role LRV1 plays in the evolution of leishmaniasis lesions and deepen the achievements of Bourreau and others21 describing the impact of LRV on first-line treatment failure and symptomatic relapse.