Inoculation lesion on the proximal palmar surface of the right hand.

(A) Low-power photomicrograph of the right hand lesion with areas of epidermal necrosis, hemorrhage, vasculitis, and perivasculitis. Occlusive vascular luminal thrombus (arrow) and lymphohistiocytic infiltrate in the deep dermis (arrowhead) (hematoxylin and eosin stain; ×40). (B) The left upper inset of panel A demonstrates hemorrhage and epidermal necrosis (×200). (C) The right upper inset of panel A reveals lymphohistiocytic vasculitis (arrow) (×200). (D) Immunohistochemical detection for typhus group rickettsiae shows conglomerates of cells containing large quantities of intracellular organisms around a site of vascular inflammation (arrow) as well as within nonvascular areas of the dermis (arrowhead) (×400). 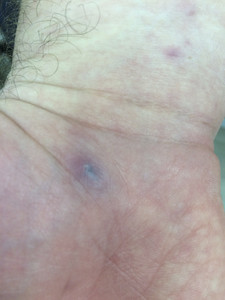 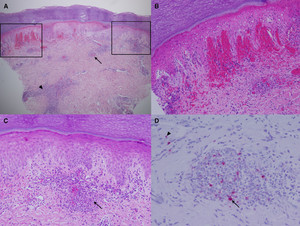 An Unusual Cutaneous Manifestation in a Patient with Murine Typhus

Murine typhus is a flea-borne febrile illness caused by Rickettsia typhi. Although often accompanied by rash, an inoculation lesion has not been observed as it is with many tick- and mite-transmitted rickettsioses. We describe a patient with murine typhus and an unusual cutaneous manifestation at the site of rickettsial inoculation.

Murine typhus is a flea-borne rickettsiosis caused by Rickettsia typhi. The disease is endemic to tropical and subtropical seaboard regions throughout the world where the primary reservoir (Rattus spp.) and the flea vectors (Xenopsylla cheopis) thrive. In southern California and in south Texas, a cycle of transmission involving opossums and their fleas (Ctenocephalides felis) comprises an alternate source of transmission.1 In Galveston, a small city on a barrier island of the upper Texas coast, murine typhus was apparently eliminated after the use of dichlorodiphenyltrichloroethane in 1946.2 After decades of quiescence, murine typhus has reemerged as a cause of illness in Galveston.3 The disease presents as an undifferentiated febrile illness accompanied by a maculopapular rash in 59% of infected persons.4–13 Unlike many spotted fever group rickettsioses (SFGR) and scrub typhus, infection caused by R. typhi is not associated with an inoculation lesion. We herein describe a patient with murine typhus and an unusual clinical feature at the site of rickettsial inoculation.

A 32-year-old Caucasian male presented to his employee health clinic on October 30, 2014 with complaints of fever and rash. Three days prior to presentation, he noticed a small lesion on his right palm, which he dismissed as a blood-filled blister. He was in his usual state of health until the afternoon of October 29 when he developed fatigue and malaise. Later that evening, he developed fever, chills, and sweats. Although he denied headache, he described an odd fog-like sensation with slowing of his mental acuity. He denied myalgias, arthralgias, sore throat, sinus congestion, rhinorrhea, cough, dyspnea, nausea, vomiting, abdominal pain, and diarrhea. Ibuprofen provided little relief from his symptoms.

The patient had no significant medical history, described himself as being healthy, and was on no chronic medications. He was a graduate student who performed research in a Flavivirus laboratory. His research involved work with biosafety level 3 viral agents. He denied recent laboratory accidents, spills, breach in safety protocols, or breach in personal protective equipment. The patient resided in a small home with his wife in Galveston, TX. He owned a pet dog and cat—both of which received regular applications of a topical anti-flea and anti-tick treatment. Although he denied tick or flea bites, he occasionally noticed a dead flea around his pets' bedding. The patient had noticed rat and opossum activity in his yard and around a detached garage. The patient denied recent foreign travel.

On examination, his temperature was 38.4°C, blood pressure 120/79 mm of Hg, heart rate 94 beats/minute, and respiratory rate 16 breaths/minute. He appeared acutely ill and was diaphoretic. Examination of his skin revealed a diffuse macular rash over his trunk and upper extremities. He had a 10 mm black macule on the ventral aspect of his proximal right palm (Figure 1). Otherwise his physical examination was unremarkable.

Because of the patient's field of study and potential occupational exposures, he was evaluated in the infectious diseases and dermatology clinics on October 31, 2014. Additional acute phase serologic tests sent for syphilis, human immunodeficiency virus, viral hepatitis, cytomegalovirus, Epstein–Barr virus, West Nile virus, SFGR, and typhus group rickettsiae (TGR) were all negative. As part of the patient's diagnostic workup, and after informed consent, a 3-mm punch biopsy was performed on the black lesion on his right hand. Considering the reemergence of murine typhus in Galveston and the patient's exposure to rats and opossums, he was treated empirically with a 7-day course of oral doxycycline, 100 mg twice daily.

Biopsy of the palmar lesion revealed epidermal necrosis and moderate diffuse mixed lymphohistiocytic inflammation of the papillary dermis and intense perivascular lymphohistiocytic inflammation of the superficial and deep dermis with modest numbers of randomly scattered polymorphonuclear leukocytes. Also present were dermal hemorrhages and intravascular fibrin thrombi, the histopathologic characteristics of an eschar (Figure 2). Immunohistochemical (IHC) testing was performed for SFGR and TGR as similar to previously described14 with a few modifications. Briefly, paraffin embedded sections 4 μm thick were cut from the tissue block. The sections were placed on electrostatically treated slides (Fisher Scientific, Pittsburgh, PA) and incubated at 60°C for 60 minutes. After deparaffinization in iodine-saturated xylene, rinses in xylene, 100% ethanol, 95% ethanol, 80% ethanol, and deionized water, the slides were loaded onto a Dako Autostainer (Dako, Carpintaria, CA) where they were digested in Protease K (Dako) at room temperature for 5 minutes and washed with tris-buffered saline and 0.1% Tween 20 (TBST). The slides were then incubated for 30 minutes with either rabbit anti-Rickettsia rickettsii or anti-R. typhi polyclonal antibodies diluted in Dako antibody diluent (Dako) at 1:2,000 and 1:3,000, respectively. After rinsing in TBST, slides were incubated with biotinylated goat anti-rabbit immunoglobulin G (IgG) (Vector Laboratories, Burlingame, CA) at a dilution of 1:200 for 15 minutes; rinsed in TBST; incubated with streptavidin-alkaline phosphatase conjugate (Vector Laboratories) at a dilution of 1:200 for 15 minutes; and stained using the Fast Red chromogen system (BioLegend, San Diego, CA) as per the manufacturer's instructions. The slides were then rinsed in deionized water, counterstained with Mayer's hematoxylin, rinsed again, and then mounted.

The IHC analysis for TGR revealed numerous infected cells, the cytoplasm of which contained masses of rickettsiae. Most of the infected cells had the appearance of mononuclear phagocytes and were located around inflamed blood vessels. There were also smaller quantities of infected mononuclear phagocytes scattered through the dermis away from blood vessels. There were a few rickettsiae-infected endothelial cells and cells with the morphology of fibroblasts (Figure 2). These observations suggest that this lesion was the portal of entry of R. typhi, which entered the cells that it encountered in the dermal interstitium, macrophages, and dendritic cells, less frequently fibroblasts, and most likely later entered vascular endothelium. IHC analysis for SFGR revealed no organisms.

On follow-up, the patient described a complete recovery. He stated that he felt remarkably better approximately 48 hours after the initiation of doxycycline. Six weeks after the onset of illness, serum tested by immunofluorescence assay remained nonreactive for SFGR but detected IgG against R. typhi at a titer of 1:2,048, an unequivocal seroconversion.

The French designation tache noir has been historically used to describe an eschar in association with the cutaneous inoculation of Rickettsia conorii, the causative agent of Mediterranean spotted fever. Tache noir literally translates as black spot—the finding that prompted the treating physicians to pursue further rickettsial investigation. A biopsy of the lesion demonstrated cutaneous necrosis and intense lymphohistiocytic perivasculitis, some of the typical histopathologic features associated with an eschar.17 Furthermore, typhus group rickettsiae were demonstrated within the tissue by IHC analysis, and DNA of R. typhi was identified. The patient's response to doxycycline and seroconversion during convalescence also support the diagnosis of murine typhus.

To our knowledge, this is the first well-characterized description of an inoculation lesion in a patient with murine typhus. In 10 large case series describing 841 patients with murine typhus, rash was found in 59%, but no localized inoculation-type lesions, similar to the one described here, were reported.4–13 In a guinea pig model of R. typhi infection, intradermal inoculation of the organism resulted in cutaneous erythema, induration, and necrosis.18 In another animal model, intended to predict eschar formation following infection with various rickettsial species, R. typhi failed to produce eschars in intradermally inoculated guinea pigs—a finding which the authors state is consistent with what is known clinically of typhus group rickettsioses in humans.19 The lesion described in this report did not have the characteristic ulceration with overlying crust of an eschar, but rather, it had dark coloration as a result of vascular hemorrhage. As with the eschar-like lesions caused by the intradermal inoculation of egg passaged Rickettsia prowazekii E strain during human vaccine studies,20 perhaps an inoculum of R. typhi, at sufficiently high doses, could progress to a lesion with the classic ulceration and black crust of an eschar.

The gut epithelial cells of the infected flea vectors are packed with R. typhi, which results in shedding of the bacterium through the fleas' feces. Therefore, murine typhus is thought to be transmitted to humans through the inoculation of R. typhi-laden flea feces onto flea bite wounds or mucous membranes. Although this is thought to be the primary mechanism of transmission, infection has been demonstrated experimentally through flea bites via inoculation of R. typhi during feeding.21 We speculate that the inoculation of rickettsiae through a flea bite, rather than exposure to infected flea feces, resulted in a local reaction similar to that which occurs after the inoculation of SFGR and Orientia tsutsugamushi by ticks and Leptotrombidium mites, respectively. As of this report, R. typhi has been demonstrated in C. felis fleas collected from opossums in Galveston (L. S. Blanton, unpublished data). In this patient's case, he had witnessed the presence of known potential reservoirs (rats and opossums) around his home.

Murine typhus is an undifferentiated febrile illness with symptoms that mimic those of many other acute infectious diseases. This, and the lack of rapid point of care diagnostic testing, makes establishing the diagnosis during acute illness extremely difficult. Therefore, the true incidence of murine typhus is hard to determine and is likely vastly underestimated. In areas of the world where R. typhi is sympatric with eschar-causing Rickettsiaceae (i.e., SFGR and O. tsutsugamushi), the presence of an inoculation lesion virtually eliminates murine typhus as a clinical diagnosis. Although this report contradicts this dictum, it should serve as a reminder of the importance of considering rickettsioses in those with subtle cutaneous signs.