DNA sequences from triatomine blood meals according to host (A) and ecotope (B). Details about 1) GeneBank code, 2) percentage of basic local alignment search tool (BLAST) identity, and 3) triatomine ecotope distributions are given in Supplemental Table 1. 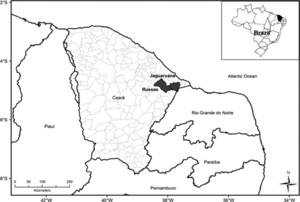 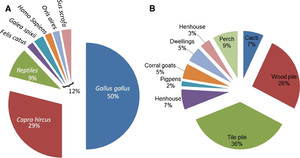 Molecular Identification of Food Sources in Triatomines in the Brazilian Northeast: Roles of Goats and Rodents in Chagas Disease Epidemiology

We used the gut contents of triatomines collected from rural areas of Ceará State, northeastern Brazil, to identify their putative hosts via vertebrate cytb gene sequencing. Successful direct sequencing was obtained for 48% of insects, comprising 50 Triatoma brasiliensis, 7 Triatoma pseudomaculata, and 1 Rhodnius nasutus. Basic local alignment search tool (BLAST) procedure revealed that domestic animals, such as chickens (Gallus gallus) and goats (Capra hircus), are the main food source, including in sylvatic environment. Native hosts were also detected in peridomestic environment such as reptiles (Tropidurus sp. and Iguana iguana) and the Galea spixii (Rodentia: Caviidae). The role of goats and Galea spixii in Chagas disease epidemiology calls for further studies, because these mammals likely link the sylvatic and domestic Trypanosoma cruzi cycles.

Early approaches to explore the triatomine dietary habits have been based on immunological tests such as precipitin4 and enzyme-linked immunosorbent assay (ELISA).5 However, these techniques have been limited due to the low quantity and the degradation of the blood in the vector gut. In addition, the detection is not able to determinate the specific taxonomic level of food sources. Some genes from mitochondrial deoxyribonucleic acid (mtDNA) have arisen as markers of choice for molecular determination of food sources,6,7 and therefore we directly sequenced a cytb gene fragment from the triatomine gut content blood meal to identify the food sources of the bugs collected in natural and artificial ecotopes in Ceará State. The triatomines were collected from rural areas (∼4°50′S, 37°46′W), located in the Jaguaribe Valley (Figure 1). In natural ecotopes, the insect captures were performed with traps8 in tree and cacti hollows and burrows. Manual searches were adopted in domestic and peridomestic ecotopes with forceps and flashlights.

Blood meals were obtained by removing the abdominal digestive tract with forceps. The DNA extraction was conducted with the Promega Wizard kit (Southampton, UK), according to the recommended protocol for blood samples. A polymerase chain reaction (PCR) amplification of the cytb fragment was targeted with the set of primers L14841 and H15149,9 following the protocol adapted by Dias and others6 for triatomines. Sequences were obtained in a ABI 377 (Applied Biosystems Inc., Torrance, CA) sequencer, aligned with ClustralW10 and edited with BioEdit 7.0.5.

Fragments with ambiguous sites were cut off; creating a reliable sequence alignment with ∼242 base pairs (bps) composed of several individual blood meal DNAs. Chromatograms with more than one peak at the same nucleotide were discarded from the analyses, considered as a result of multiple blood meals. For food source DNA identification, sequences were then compared with the ones deposited in the database of the Basic Local Alignment Search Tool (BLAST searches; http://www.ncbi.nlm.nih.gov/blast, nucleotide blast).

The highest rate of reliable sequences came from tile (21/27) and wood (15/35) piles, whereas the lowest came from the sylvatic environment in cacti (4/26). The remaining sequences were obtained from bugs collected in henhouses (N = 6), perches (N = 5), corralled goats (N = 3), dwellings (N = 3), and pigeons (N = 1). Figure 2 provides details on the rate of DNA hosts detected and ecotopic distribution of sequences. Concerning triatomine species, most sequences came from Triatoma brasiliensis gut content (N = 50) and a few from Triatoma pseudomaculata (N = 7) and Rhodnius nasutus (N = 1).

The high rate of unsuccessful PCR and sequencing (53%) is likely a result of the low nutritional status of insects or the multiple blood sources, resulting in short, unreadable, or overlapping sequences. Noteworthy, most unreadable sequences came from cacti, which match field observations stating that sylvatic Triatoma brasiliensis s.l. collected bugs are often extremely starving.11

Most of BLAST identity was over 97%, nonetheless 11 sequences had values lower than 95%, almost half represented by reptiles. This could indicate that GenBank does not always have a satisfactory representation of vertebrate diversity from a particular study area. For details, see Supplemental Table 1 with GenBank access codes and identity (%) for sequences generated.

As expected, goat DNAs (Capra hircus) were identified in insects collected in goat corrals. Nevertheless, goats were also detected as a food source for triatomine populations in varied ecotopes, for example, wood (N = 6) and tile (N = 5) piles in peridomiciles, therefore established as the prevalent mammal blood meals in bugs from peridomiciles, and natural habitat (cacti, N = 3). This is consistent with field observation since goats circulate freely among all investigated ecotopes. The high prevalence of goats as a food source in several kinds of ecotopes might be explained by the high mobility of these animals to graze, which was already mentioned,5,11 with evidences of triatomine blood meals based on field observation and serological tests (precipitin4 and ELISA5). We stress that in our study area, local people use this animal as one of the main sources of protein, as meat and milk, often manipulating raw meat and sometimes drinking fresh and unpasteurized milk, both circumstances possibly enable the parasite infection in humans. No study has ever been conducted concerning the possibility of bleeding nipples transmitting Chagas disease. In view of the high exposure of goats to infection, we recommend care to manipulate raw meat and avoid drinking unpasteurized milk from goats. Additional studies on the role of this animal in Chagas epidemiology are required.

No DNA of Sus scrofa was detected in pigpens. Instead, pig blood meals were identified in two bugs captured in woodpiles. Blood meals identified in non-expected ecotopes may indicate animal mobility, as goats in cacti and pigs in piles. However, because pigs are often raised confined, this led us to suggest bug mobility. It has been proposed12 that the ambulatory dispersion capacity among ecotopes is a triatomine strategy to disperse when engorged and/or with eggs.

Half the blood meals (50%) were identified as chicken (Gallus gallus), distributed over all ecotopes. In peridomiciles, the chicken-blood-fed triatomines were collected in henhouses, perches, and tile piles near the henhouses. Chicken DNA was identified in two bugs from intradomiciles, where Gallus gallus were often observed circulating. This avian exhibits high mobility, often invading cacti located over 200 m from the henhouse and perch, which might have been responsible for one blood meal detected. Despite being refractory to Trypanosoma cruzi, these domestic fowl have already been reported as responsible for maintaining triatomine colonies in peridomestic environments, serving as a food source and affording the emergence of abundant populations of these vectors in proximity to humans.4,13,14

In this study, the finding of human DNA in a Triatoma brasiliensis fifth nymph instar specimen captured inside a house is worrisome, indicating resident bugs feeding on humans. Valença-Barbosa and others15 highlighted that bug numbers based on capture are rather underestimated. In addition, we13,16 consider the finding of nymphs in domiciles a signal of home infestation, because these insects are unable to fly and are likely to have been raised in the proximity to humans.

Concerning other mammals, a cat DNA was also detected in a peridomicile woodpile-captured bug. Along with pigs and sheep, these animals may serve as potential Trypanosoma cruzi reservoirs in peridomiciles. Two bugs captured in peridomiciles (wood and tile piles) fed on Galea spixii (Rodentia: Caviidae), the only native host mammal detected, which led us to suggest it may be the primary food source and likely to be also the primary Trypanosoma cruzi reservoir in the region, as previously suggested.14 The few number of Galea spixii blood meals identified in the sylvatic habitat, where Galea spixii is often seen, may be explained because bugs probably fed mostly on more diversified hosts in this ecotope leading to mixed sequences, as a high proportion of samples were discarded for this reason. Bezerra and others17 detected the prevalence of Galea spixii and another native rodent, Kerodon rupestris, in wild ecotopes, along with goats, lizards, and chicken.

Nine percent of sequences matched reptiles (four Tropidurus oreadicus and one Iguana iguana), all from tile/wood piles and pigpens. The determination of Tropidurus oreadicus, a lizard from central region of Brazil, is probably feeding on Tropidurus semitaeniatus, which is widely distributed in the study region,18 without cytb sequences in the GeneBank though. Some authors16,19,20 had already evidenced this triatomine behavior, stating that the presence of lizards may help to keep infestations, especially in the absence of warm-blooded animals.

Despite the rate of unsuccessful sequencing, we presented the largest sampling size for food source detection of Brazilian triatomines until the present date. Limitations of direct sequencing could be partially solved by cloning, however, time and cost consuming. Moreover, degraded DNA may also be responsible for fragmented sequences, leading to shorter sequences. Both mixed feedings and fragmented DNA may be solved with the designs of new primers. The role of goats in Chagas disease epidemiology calls for further studies, because it was the most prevalent mammal blood meal source not only in peridomestic ecotopes but also in the sylvatic. The synanthropic Galea spixii rodent is likely linking the sylvatic and domestic Trypanosoma cruzi cycles.