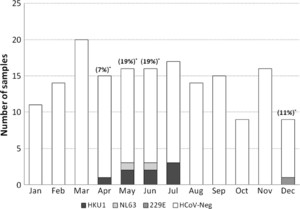 Infections of the respiratory tract continue to be a major cause of morbidity and mortality worldwide. Several studies in different settings have identified known respiratory viruses such as influenza, adenovirus, and respiratory syncytial virus as the main causes of respiratory infections. Until the last decade, a large proportion of respiratory illness remained undiagnosed because of a lack of widely used, accurate, and cost-effective diagnostics, especially in developing countries. Recent advances in molecular biology have led to the development and availability of standardized diagnostic tests and the discovery of new viruses. Novel respiratory viruses such as recently discovered human coronaviruses (HCoVs), human bocaviruses (HBoVs), and human metapneumoviruses are now recognized or suspected to be common causes of upper and lower respiratory tract disease.1 However, gaps remain in the knowledge of the distribution, epidemiology, and natural history of the diseases caused by these pathogens.

Coronaviruses are species of viruses belonging to the subfamily Coronavirinae within the Coronaviridae family. On the basis of the genome characteristics and serology, human coronaviruses are divided into three distinct groups.2 Coronaviruses recognized to infect humans belong to the genera Alphacoronavirus and Betacoronavirus.2,3 Two HCoVs (HCoV-229E and HCoV-OC43) were identified in the 1960s.4,5 For decades, these were the only HCoVs to be identified as possible agents of respiratory diseases and were primarily associated with upper respiratory tract illnesses. However, since the identification of severe acute respiratory syndrome–associated coronavirus in 2003, at least three new HCoVs have been identified; HCoV-NL63, a new Alphacoronavirus was identified in 2004.6 In the same year, HCoV-HKU1 was discovered in Hong Kong.7 Most recently, the Middle East respiratory syndrome coronavirus, has earned worldwide attention.8,9

Human coronaviruses have been associated with a wide spectrum of respiratory diseases in different studies. In 2004, van Elden and others10 demonstrated the role of HCoVs as respiratory pathogens, reporting that HCoV-229 and/or HCoV-OC43 were detected in 11% of patients with respiratory tract infections compared with 0.4% in control subjects. However, there is still debate about the pathogenic role of HCoVs in upper and lower respiratory diseases since later studies have found similar infection rates between sick and control subjects.11 Studies done in ambulatory and hospitalized patients report a variety of respiratory symptoms, with almost no difference between those caused by non-HCoVs and HCoVs.12

Human coronavirus infections have been reported globally in different groups of patients and in a wide variety of settings.13 Incidence of the four HCoVs varies according to the location and study population, with ranges from 0% to 8%.14,15

Although the number of reports on HCoVs has increased in recent years, there is limited information on the incidence and epidemiology of these viruses as causes of ILI in the community setting, especially in low-and middle-income countries such as Peru. Furthermore, most studies have been performed through passive surveillance, precluding assessment of the burden of infection in the general population. We therefore tested respiratory samples collected from a prospective active surveillance cohort study on ILI in Peru for the presence of HCoV.

Respiratory samples were collected from persons with influenza-like illness (ILI) in an ongoing community-based prospective cohort study of approximately 7,000 participants in 1,500 households located in four geographically distinct locations in Peru: Lima (central coast/urban), Tumbes (tropical coast/rural), Cusco (highlands/semi-rural), and Puerto Maldonado (Amazon rainforest/urban), started in 2009.16 Households were randomly selected and participants were invited to participate in the study regardless of age. Household screening visits for ILI were made three times per week. ILI was defined as fever (temperature ≥ 38°C) and either cough and/or sore throat in adults, adding runny nose in children. A questionnaire on potential risk factors and burden of disease was administered to all cases and a nasopharyngeal (NP) swab was collected for testing for influenza virus by real time reverse transcription polymerase chain reaction (real time RT-PCR). Cases were followed for 15 days after symptom onset to record full clinical evolution and economic expenses related to the disease episode.

NP samples were collected using Dacron swabs and placed immediately into universal transport media. Samples were transported to the laboratory in coolers at 4°C where they were kept in a −70°C freezer, until transported to Naval Medical Research Unit No. 6 (NAMRU-6) for testing.

A total of 172 samples (from 96 males and 76 females) collected between January and December 2010 that tested negative for influenza viruses as well as 27 that were influenza positive (representing 8.2% of all samples collected in the study) were randomly selected for testing. All four sites were roughly evenly represented (44 from Lima, 51 from Tumbes, 37 from Cusco, and 40 from Puerto Maldonado), and the samples were roughly evenly distributed across the year (data not shown). Multiplex PCR was performed using the Luminex Respiratory Viral Panel assay (Austin, TX) for the following viruses: HCoV-HKU1, HCoV-NL63, HCoV-229E, HCoV-OC43, influenza A and B, parainfluenza 1–4, adenovirus, entero-rhinovirus, and bocavirus.

Of the 172 samples that tested negative for influenza viruses, 11 (6.4%) were positive for HCoV, specifically HCoV-HKU1 (8), HCoV-NL63 (2), and HCoV-229E (1). HCoVs were identified in 7 males and 4 females and were mostly children (one 7-month-old and seven in the age group 1–5 years), although there were three adults (31, 32, and 59 years old). No coinfection with HCoV and other viruses were noted. Ten of the 11 persons with ILI in which HCoVs were identified had been sick between April and July, corresponding to autumn–winter in Peru (Figure 1). The only HCoV infection identified outside this period, in late spring, was HCoV-229. HCoV infections were identified from all four cohort sites: three from Lima, four from Cusco, and two each from Puerto Maldonado and Tumbes.

Persons with HCoV infections had a variety of upper respiratory infection symptoms, including cough, sore throat, headache, runny nose, and malaise. None of the individuals with HCoV infection had severe illness or required hospitalization. One 2-year-old child who tested positive for HCoV-HKU1 experienced diarrhea in addition to ILI. There was no statistically significant difference in symptoms between patients who had HCoV infection and those who did not (data not shown).

The study was approved by the NAMRU-6 Institutional Review Board.

Our results suggest that HCoVs, especially HCoV-HKU1, are commonly associated with ILI in Peru, infecting persons across a broad age range. The prevalence of HCoV infection in our study was similar to that reported from other countries in Latin America.15 The fact that cases were seen in four geographically disparate surveillance sites suggests that HCoVs are widely distributed across the country and circulate in urban as well as rural areas and at varied altitudes and conditions of temperature and humidity. Although we report data from only 1 year of surveillance, there appeared to be a distinct seasonality, corresponding roughly to autumn and early winter in Peru (it should be noted that there is significant climatic variation between the four surveillance sites). Similar seasonal trends have been previously reported.12 This seasonal pattern could dilute the importance of these type of infections when examining only the yearly occurrence of this infections. For example, 13% of influenza-negative ILI would be associated with HCoVs during the fall–winter period in Peru (April–September). Moreover, if we restrict the analysis to the peak months, HCoVs would be associated with 19% of influenza-negative ILI infections in May and June 2010. Limitations to our study include the relatively small sample size, which precludes making associations with particular species of HCoVs, and the absence of an asymptomatic control group, precluding definitive conclusions on the causal nature of the HCoV found in each case of ILI. Nevertheless, in each case, HCoV was the only putative pathogen found. Further research and surveillance are needed to understand the detailed epidemiology and full scope of HCoVs as threats to public health in Peru and elsewhere.