Patient with features of Cushing syndrome including central obesity and wasting of extremities (A) and abdominal striae (B). The patient provided written consent to show his face in this report.

(A) Immunohistochemistry for ACTH appears brown in the specimen, which was only found in the very periphery of the lesion. (B) The normal acinar structure of the pituitary gland is focally disrupted by the unregulated growth of the ACTH-producing microadenoma. 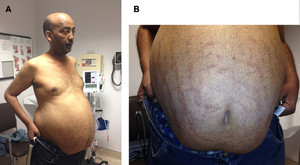 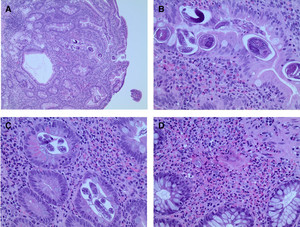 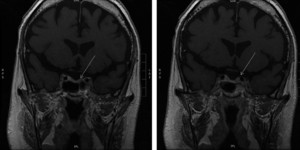 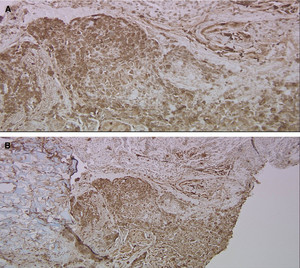 Search for other papers by Roland R. Lee in
Current site
Google Scholar
PubMedClose
,
Hoi-Sang U
Hoi-Sang U

Strongyloidiasis is a major public health issue with increasing global prevalence, especially in certain parts of Europe, North and South America, Asia (southeast Asia and the Indian subcontinent) and Africa.1 In contrast to other nematodes, Strongyloides stercoralis infection is characterized by an autoinfection cycle that typically is chronically controlled and not clinically manifest. However, when the host response fails to control infection, patients become infected with large numbers of parasites (hyperinfection). Hyperinfection is often associated with intestinal damage (including obstruction and perforation), pulmonary hemorrhage, and may lead to bacterial superinfection (accompanied by bacterial sepsis, pneumonia and/or meningitis, and sometimes finding S. stercoralis larvae in bronchoalveolar lavage fluid or cerebrospinal fluid). Hyperinfection typically develops in the context of altered host defenses due to excess corticosteroids (either iatrogenic or endogenous), human T-lymphotropic virus type 1 (HTLV-1) infection, or severe malnutrition. Because symptoms of chronic infection are either absent or nonspecific, diagnosis is often delayed unless suggested by unexplained eosinophilia.

Widespread S. stercoralis larval proliferation and migration can lead to either superinfection (accompanied by bacterial sepsis, pneumonia, and/or bacterial/parasitic meningitis) or hyperinfection, a syndrome preceding superinfection where larger than usual numbers of S. stercoralis cause intestinal damage but do not disseminate (along with intestinal bacteria). Both syndromes are characteristically due to specific forms of immunosuppression, particularly the presence of excessive corticosteroids, whether iatrogenic or endogenous, and coinfection, for example with HTLV-I. Because symptoms of typical chronic infection are either absent or nonspecific, the diagnosis of severe strongyloidiasis may be delayed2 (unless suggested by otherwise unexplained eosinophilia) until complications develop.3–6 Herein, we describe a case of S. stercoralis hyperinfection that led to the diagnosis of underlying Cushing disease.

A 50-year-old Ethiopian man with hypertension and poorly controlled diabetes mellitus was referred to infectious disease clinic after 3 years of recurrent gastrointestinal (GI) bleeding and a biopsy suggesting strongyloidiasis. He was born and raised in Addis Ababa, Ethiopia, and had resided in Khartoum, Sudan, before immigrating to the United States 10 years before our evaluation. Previously, he had undergone coronary artery stenting for atherosclerotic disease and received aspirin and clopidogrel for 2 months, when he first developed lightheadedness, weakness, and abdominal discomfort due to GI bleeding. Over the subsequent 3 years, he had intermittent melena and hematochezia complicated by hypotension and anemia, which required multiple hospitalizations and blood transfusions each year.

To investigate the etiology of his GI bleeding, multiple laboratory tests, imaging studies, and endoscopic procedures (at least six) were performed from 2010 to 2013. Serum studies were negative for Helicobacter pylori and hepatitis B virus; multiple stool specimens (at least four) were negative for all ova and parasites (including specifically hookworm ova), and for Cryptosporidium spp., Cyclospora cayetanensis, Isospora belli, and Microsporidium spp. Abdominal ultrasound and computerized tomography (CT) scans were noncontributory. Capsule endoscopies and tagged red blood cell scans were unrevealing (capsule endoscopy has been reported to detect hookworms associated with GI hemorrhage7). Enteroscopies revealed Barrett's esophagus, duodenitis, and benign small bowel polyps. Colonoscopies revealed pan-colonic diverticulosis and active bleeding thought to be due to arteriovenous malformations, which were treated with cautery. The patient continued to have hematochezia and melena that required blood transfusion every 3–4 months. In December 2013, upper and lower endoscopies demonstrated grossly similar findings as seen previously but histopathology was formally reported as showing “parasite parts,” subsequently interpreted as S. stercoralis, in the duodenum, jejunum, cecum, and colon (Figure 2). These findings prompted referral for infectious diseases outpatient consultation.

The differential diagnosis for this patient's chronic GI bleeding was initially broad and included gastroesophageal reflux disease, Barrett's esophagus, inflammatory bowel disease (IBD), medication-induced colitis, and infectious etiologies. No pathological findings typical of IBD or medication-induced colitis were seen on multiple endoscopic evaluations. Evaluation for bacterial causes of colitis (Campylobacter, Shigella, and Yersinia spp.) and Entamoeba histolytica were negative by culture and serology, respectively. Hookworm infection was excluded given the lack of ova seen on multiple stool examinations,8 as well as the distribution of the parasites in the GI track and the histopathology.8 Given the patient's immigration history, laboratory finding of eosinophilia, and characteristic histopathological findings, S. stercoralis hyperinfection was identified as the cause of his chronic GI bleeding. Serological testing was positive for S. stercoralis (31.9 units/mL, normal < 1.7) further supporting the diagnosis, but negative for Schistosoma mansoni and Schistosoma haematobium (which can cross react with S. stercoralis9). Strongyloides stercoralis hyperinfection was attributed to immunosuppression induced by endogenous hypercortisolemia due to a corticotroph microadenoma.

After ivermectin treatment (200 μg/kg over two consecutive days), GI bleeding and eosinophilia resolved. No other anthelminthic drug was given. At 6-month follow-up, eosinophilia recurred (12%), responding again to the same course of ivermectin. No further GI bleeding occurred. At follow-up, 6 months after re-treatment, the eosinophil count was normal. Resection of the corticotroph microadenoma led to gradual normalization of urine and salivary cortisol levels. Glycemic control improved (hemoglobin A1c 6.8%), but proximal muscle weakness continues.

Herein, we report a case of chronic GI bleeding from S. stercoralis hyperinfection due to unsuspected Cushing disease, a novel presentation that took years to diagnose. This patient's comorbid illnesses (coronary artery disease, aspirin use, diabetes, and Barrett's esophagus) and misinterpreted endoscopic findings (presumed but not confirmed arteriovenous malformations, duodenitis) delayed the diagnosis of strongyloidiasis, which was initially suggested by biopsy and further confirmed by serology.

Two cases of S. stercoralis hyperinfection accompanying Cushing syndrome have been previously reported4,10: one had respiratory symptoms and ectopic ACTH syndrome due to a small cell lung cancer10, the other had abdominal pain and Cushing syndrome of unknown etiology.4 Although this is the third documented case, it is the first to highlight recurrent GI bleeding as the primary presenting symptom of hyperinfection in the setting of Cushing syndrome.

Strongyloides stercoralis is a nematode with the remarkable ability to continue reproducing within a human host via an autoinfection cycle leading to a long-term infection, potentially persisting—in the absence of treatment—for decades.3,5,11 However, individuals with impaired host defense (particularly corticosteroid excess and HTLV-I infection) are at risk for accelerated larval proliferation2,5,12 and high parasite burden leading to S. stercoralis hyperinfection. Severe GI bleeding may occur in hyperinfection due to massive larval invasion of the GI mucosa.3 Widespread, extraintestinal larval invasion beyond the normal pattern of migration and into extraintestinal organs is characteristic of disseminated strongyloidiasis, also known as superinfection, which can lead to serious sequelae such as meningitis, polymicrobial bacteremia, sepsis, and death.1,5,6,10

Strongyloidiasis is typically diagnosed in mild cases when a patient with a relevant travel history presents with eosinophilia, possibly but not always accompanied by abdominal pain or other complaints. Clinical examination, laboratory testing, imaging, and endoscopy1,2 are not specific in the absence of an etiological diagnosis, which can be obtained by visualizing parasites in a stool examination (insensitive), histopathology (invasive), or serology (which can have cross-reactions with other helminths; the negative schistosomiasis serologies helped to rule out that cross-reaction in this case). Our patient underwent multiple hospitalizations, many blood transfusions, and extensive workups with more than 10 endoscopic studies over a 3-year period before histopathologic examination of intestinal biopsies demonstrated parasites. He had many stool samples microscopically negative for ova and parasites even after parasites were found in colonoscopy. Ultimately, the diagnosis was demonstrated by serological testing combined with histopathology of biopsy specimens obtained after additional endoscopy. Endoscopic findings in Strongyloides-related colitis are often nonspecific, ranging from normal to friable, ulcerated, erythematous, or nodular mucosa.1,4 Strongyloidiasis can also be diagnosed with a low yield by straight stool microscopy.13 The sensitivity of stool microscopy improves with serial sampling1 or when combined with serological testing where sensitivity has been reported to be ∼95%, but this requires clinical suspicion, which is not always apparent in industrialized countries.1 Special tests on stools that are more sensitive to detect Strongyloides larvae, including polymerase chain reaction, agar plate culture, and Baermann concentration, were not performed on samples from this patient because there was no suspicion for this infection before the final set of endoscopies and biopsies were performed; such tests are available in specialized laboratories.14,15 Eosinophilia at low or high levels may be the only finding to suggest subclinical Strongyloides infection, but in the presence of corticosteroid excess or HTLV-I coinfection (another risk factor for complicated strongyloidiasis) is distinctly unusual and may well be absent in Strongyloides hyperinfection. The variable presence of eosinophilia in Strongyloides hyperinfection is probably related to bacterial superinfections or unknown drivers of host immune responses.

The nonspecific symptoms of S. stercoralis hyperinfection may delay diagnosis leading to serious sequelae including fibrosis, bowel wall perforation, or gram-negative sepsis.3–6 A key feature illustrated by this case is that the presence of severe strongyloidiasis must lead to suspicion of underlying immunodeficiency. Clinicians must maintain a high index of suspicion when treating patients in developed countries or urban areas where strongyloidiasis infection may be uncommon. Travel and immigration histories are essential for assessing risks of exposure. Strongyloidiasis is endemic in eastern Europe, Latin America, Africa, southeast Asia, and the southern United States,1,3,16,17 warranting a high suspicion for strongyloidiasis in patients from these areas. Although our patient initially presented after having lived in the western United States for about 16 years, his immigration from Ethiopia was a major risk factor for helminthic infection.

According to the World Health Organization guidelines, ivermectin has a cure rate of 82.9% based on a randomized trial performed in children18 but in patients with hyperinfection and/or dissemination, multiple doses may be needed until stool and/or sputum is negative for 2 weeks.19 Typically, serial stool sampling is used to monitor response to treatment. However, our patient never had a positive stool exam despite repetitive stool sampling when parasitic parts were found on colonoscopy. Absence of stool findings in patients with hyperinfection has been previously described.1 Instead, the absolute eosinophil count was used as a biomarker to evaluate parasite clearance. The eosinophil count was normal after each 2-day treatment with ivermectin (200 μg/kg/day), but had increased 6 months after the first treatment, likely related to the corticosteroid-induced defect in host defense. As of this writing, despite his normalized endocrinopathy, proximal myopathy persists. It remains to be seen whether this symptom will gradually resolve as his other chronic conditions are managed.

To our knowledge, this is the first report of profound, chronic GI bleeding as a bellwether of Strongyloides hyperinfection in a patient with Cushing syndrome. The antiplatelet therapy because of coronary artery disease and stent placement contributed to the bleeding. The diagnosis of strongyloidiasis is often delayed because of the lack of specific clinical features or laboratory/imaging findings, combined with low suspicion in industrialized countries. Once the diagnosis of Strongyloides hyperinfection is made, the patient should be evaluated for underlying immunosuppression. Eosinophilia in an immigrant from an endemic area should raise clinical suspicion for helminthic infection even in the absence of symptoms.