Photomicrographs of migrated Gnathostoma spinigerum: (A) advanced third-stage larva recovered from the eye and (B) an immature male from subcutaneous tissue.

Phylogenetic trees of roundworms in the genus Gnathostoma were reconstructed using the maximum likelihood method in MEGA v6.0 based on partial mitochondrial cox-1 gene sequences (A) and the ITS2 region (B). Gnathostoma species obtained from GenBank are indicated with accession number and country code (ISO 3166-1 alpha-3 codes). Gnathostoma spinigerum sequences obtained from this study are presented in bold (KP941020–KP941025). Bootstrap scores, expressed as percentages of 1,000 replications, are given at each node. 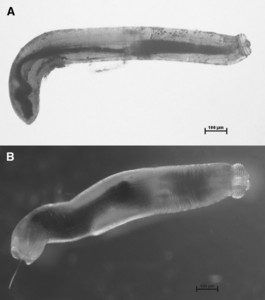 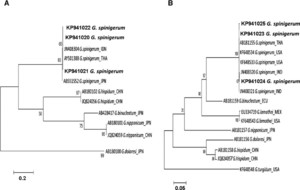 Human gnathostomiasis is one of the important food-borne parasitic zoonoses. The disease is caused by a spirurid roundworm of the genus Gnathostoma. Here, we describe three parasitological confirmed cases of human gnathostomiasis, caused by Gnathostoma spinigerum, in a hospital in Thailand during 2004–2012. Clinical characteristics, treatment, and outcome of cases were revealed. Parasites were accidentally recovered from patients and morphologically identified as Gnathostoma species. Confirmed diagnosis and identification of causative parasite species was made by DNA extraction of the recovered worms, followed by a polymerase chain reaction (PCR) of the second internal transcribed spacer region (ITS2) of DNA and the partial cytochrome c oxidase subunit 1 (cox-1) gene. Sequences corresponding to ITS2 and cox-1 were similar to G. spinigerum. To our knowledge, this study represents the first molecular confirmation that recovered G. spinigerum is a causative agent of human infection in Thailand.

Human gnathostomiasis, a deleterious food-borne helminthic zoonosis caused by an infection with spirurid nematodes of the genus Gnathostoma, is a regional disease mainly in Asia and the Americas.1–3 The disease has been emergent among travelers who have visited endemic areas.4–6 Cases have also been reported in increasing numbers, and it is considered to be an emerging imported disease in areas where it is non-endemic.7 Infection is acquired where people preferentially consume uncooked/undercooked freshwater fish harboring advanced third-stage larvae.3 Gnathostomiasis is generally recognized as a cutaneous disease. However, sometimes the worms accidentally migrate to vital organs, for example, the central nervous system, eyes, producing severe pathologic features that can lead to serious complications and even death.8

Thirteen Gnathostoma species have been reported; seven species are distributed in American continents and six in Eurasia. Five species—G. spinigerum, G. hispidum, G. doloresi, G. nipponicum, and G. binucleatum (four species in Asia and one species in Latin America)—are morphologically recognized as human pathogens.3 In Thailand, many human cases have been documented, but there is no record of the total number of gnathostomiasis cases.3

To our knowledge, little information has been published on molecular identification of Gnathostoma species recovered from patients. In this study, the DNA sequences of the second internal transcribed spacer region (ITS2) and partial cytochrome c oxidase subunit 1 (cox-1) gene of G. spinigerum recovered from infected humans were identified. The phylogenetic relationship between G. spinigerum and other Gnathostoma species is also discussed.

Between the years 2004 and 2012, three Gnathostoma specimens were recovered from three patients (one specimen per case) who were diagnosed with gnathostomiasis by clinical characteristics (Table 1 and Figure 1) at Srinagarind Hospital, Khon Kaen University, Khon Kaen, Thailand. Based on a retrospective review of medical records, clinical characteristics such as age, symptoms, duration, and location of symptoms were reviewed. All patients had a diet history of consuming uncooked/undercooked freshwater fish and were positive for specific IgG antibody against G. spinigerum by an immunoblotting technique.10 The patients underwent supportive treatment and were completely cured after worm recovery. Three worms were preserved in 70% ethanol and kept in the freezer −80°C before DNA extraction. This study was approved by the Khon Kaen University Ethics Committee for Human Research (HE571209).

Clinical characteristics of three cases of gnathostomiasis from 2004 to 2012

In this study, worm was removed by surgery (Figure 1A).

In this study, worm move outward to the dermis (Figure 1B).

To identify the causative parasite species, genomic DNA was extracted directly from partial tissues of individual Gnathostoma worms using a commercial DNA extraction kit (NucleoSpin® Tissue; Macherey-Nagel, Düren, Germany) according to the manufacturer's instructions. A partial cox-1 gene was amplified using the primers Gn_COI (F 5′-GCCTGCTTTTGGAATTGTTAG-3′, R 5′-ACGAAAACCATACAAAGTAGCCAA-3′), and partial 5.8S, entire ITS2, and partial 28S regions were also amplified using the primers GS_ITS2 (F 5′-TGTGTCGATGAAGAACGCAG-3′, R 5′-TTCTATGCTTAAATTCAGGGG-3′). Both primer pairs were genus-specific for Gnathostoma species. Polymerase chain reaction (PCR) for both regions were performed in a 25 μL reaction volume containing 10–20 ng of genomic DNA, 2.5 μL of 10 × FastStart High Fidelity Reaction Buffer with 18 mM MgCl2 (Roche, Mannheim, Germany), 200 μM of each deoxyribonucleotide triphosphate, 0.2 μM of each primer (Sigma-Aldrich, St. Louis, MO), and 0.625 units of FastStart High Fidelity Enzyme Blend (Roche). The DNA template was initially denatured at 94°C for 5 minutes. The amplification procedure consisted of 35 cycles at 95°C for 30 seconds (denaturation), 55°C for 30 seconds (annealing), and 72°C for 30 seconds (extension), with a final extension at 72°C for 10 minutes. For each set of PCR reactions and extraction of the DNA, samples without DNA (negative) and known (positive) control DNA samples were also included. The PCR was carried out using a GeneAmp® PCR System 9700 (Applied Biosystems, Foster City, CA). Amplified products were run on 1.5% agarose gel electrophoresis; 250 bp of cox-1 and 650 bp of partial 5.8S, entire ITS2, and partial 28S region fragments were cut and sequenced using a 3730xl DNA Analyzer and ABI BigDye version 3.1 (Applied Biosystems). All DNA fragments were sequenced in both directions employing the same primers as used in the PCR.

The partial cox-1 gene and the complete sequence of the ITS2 region from individual worms were analyzed using the BLASTN search program (National Center for Biotechnology Information (NCBI), Bethesda, MD). The new sequences of both regions were aligned with the reference sequences from the NCBI database (alignment length of 205 bp for cox-1 and 472 bp for ITS2 region after trimming the primer sequences and the length of the shortest published sequence) using Bioedit.11 Phylogenetic relationships were inferred using the maximum likelihood method implemented in MEGA v6.0.12 The best model for cox-1 was HKY + G and for the ITS2 region was K2 + G. The selected dataset and support for clusters in each tree was calculated using 1,000 bootstrap replications. Sequences of several other Gnathostoma species from the database were used for the alignment of both partial cox-1 and ITS2 regions; the details of nucleotide sequences are presented in Figure 2.

Each of three worms was obtained from an individual patient who had been diagnosed with gnathostomiasis. Details of the samples are summarized in Table 1. A 250-bp PCR product of the partial cox-1 gene was successfully amplified from the genomic DNA of all three individual Gnathostoma larvae. No intraspecific variation was detected from obtained partial cox-1 sequences. In the phylogenetic tree (Figure 2A), all obtained partial cox-1 gene sequences of the Gnathostoma worms were located with known sequences of G. spinigerum in a single, strongly supported clade. All of these sequences had at least 99–100% similarity with the sequences of G. spinigerum in published databases (from Japan, Thailand, and Indonesia). For partial 5.8S, entire ITS2, and partial 28S regions, all three individual Gnathostoma worms were also successfully amplified for a 650-bp PCR product. The full length of ITS2 (472 bp) among these samples was aligned, and sequence differences ranged from 0% to 0.21%. There was 1 (0.21%) variable site in the 472 bp (transitions; T ↔ C, N = 1). In the phylogenetic tree (Figure 2B), all sequences were located with published sequences of G. spinigerum (from the United States, Thailand, and Indonesia) in a single, strongly supported clade (99–100% similarity).

These results indicated that parasites obtained from the three patients were G. spinigerum. All new partial cox-1 and partial 5.8S, entire ITS2, and partial 28S regions of G. spinigerum have been deposited in the GenBank database under accession nos. KP941020–KP941022 and KP941023–KP941025, respectively (Figure 2).

Generally, morphology has been used for identification of Gnathostoma species recovered from gnathostomiasis patients.1,3,13 However, it is very difficult to differentiate the causative species because some species have morphological similarity. The process thus requires experienced classical parasitologists or highly trained laboratory personnel. In brief, for species classification of advanced third-stage larvae (AL3) among five human pathogen species (see Introduction), morphological features can be distinguishable by the number of row and feature of the head-bulb hooklets and the number of hooklets in each row, the shape and distribution of cuticular spines, and the number of nuclei in the intestinal cell of AL3 cross section in abdominal region.3 G. nipponicum AL3 is the only species that has three rows of hooklets on the head bulb whereas the other harmful species can be identified by using the different number of hooklets in each row and the number of nuclei in the intestinal cell.3 For immature adults have overlapping morphological features among the five pathogenic species, they can be identified by the feature of body cuticular spines and body sizes.3 If that is the case, then molecular genetic information such as DNA sequencing analysis can serve as an accurate tool for the identification of parasites at the species level. Ando and others14 reported a comparison of ribosomal DNA sequences and cox-1 sequences in mitochondrial DNA among five Gnathostoma species (G. spinigerum, G. hispidum, G. doloresi, G. nipponicum, and G. binucleatum). They revealed that the number of nucleotides in the ITS1 region differed among the five species, and suggested the use of the nucleotide region of the ITS2 sequence for inter-species identification.14 Although intraspecies variation was not seen in ITS2 sequences, it was seen in the partial cox-1 gene of G. spinigerum populations in Thailand.15 Interestingly, to our knowledge, this study provides the first molecular confirmation that G. spinigerum recovered from gnathostomiasis patients is a causative agent of human infection in Thailand. DNA sequencing analysis can clarify the misidentification based on the morphological features of Gnathostoma species that cause human diseases, as previously found.16 Gnathostoma species in the Americas are often misidentified as G. spinigerum based on their morphological features; it has now definitively been molecularly proven that G. binucleatum is the different species engaged.16 These results can be used as a model for studying the biology, epidemiology, and supplementary differential diagnosis of gnathostomiasis.

On the basis of the available ITS2 and cox-1 sequence data from GenBank, we have constructed a maximum likelihood phylogenetic tree for seven Gnathostoma species (Figure 2). Little sequence variation was shown between this study and published sequences of G. spinigerum (from the United States, Thailand, and Indonesia). Molecular phylogenetic variations and their relationship to geographical distribution and/or pathogenicity require further investigation.