Blood:weight ratio distributions by treatment group. Blood:weight is the ratio of the volume of blood consumed in the infective blood meal by a given insect to its pre-feeding weight in milligram. The Cas20 group blood:weight ratio was significantly lower than that of the Gal61, Sebas1, and control groups.

Proportion of insects in each treatment group that died during molt. 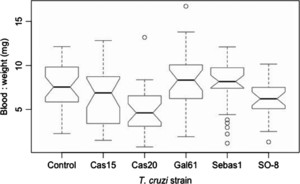 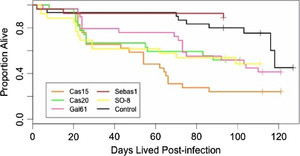 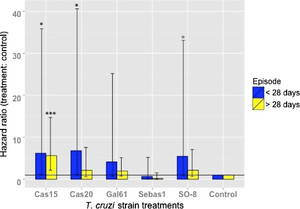 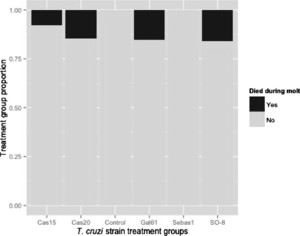 The effect of a parasite on the life history of its vector is important for understanding and predicting disease transmission. Chagas disease agent Trypanosoma cruzi is a generalist parasite that is diverse across scales from its genetic diversity to the 100s of mammal and vector species it infects. Its vertebrate hosts show quite variable responses to infection, however, to date there are no studies looking at how T. cruzi variability might result in variable outcomes in its invertebrate host. Therefore, we investigated the effect of different T. cruzi I strains on Rhodnius prolixus survival and development. We found significant variation between insects infected with different strains, with some strains having no effect, as compared with uninfected insects, and others with significantly lower survival and development. We also found that different variables had varying importance between strains, with the effect of time postinfection and the blood:weight ratio of the infective meal significantly affecting the survival of insects infected with some strains, but not others. Our results suggest that T. cruzi can be pathogenic not only to its vertebrate hosts but also to its invertebrate hosts.